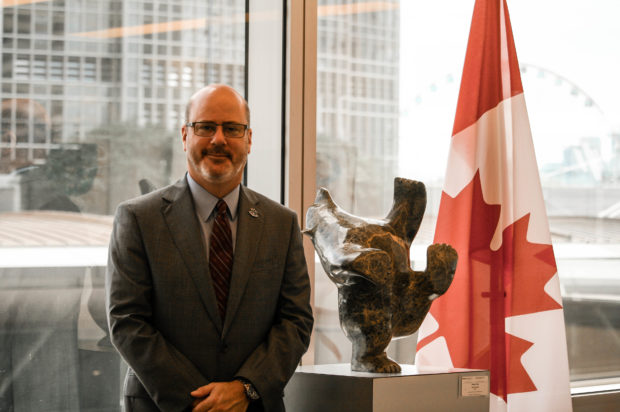 Originally published in Harbour Times as “Canada 150 in Hong Kong: Photos and Report from Consul General Jeff Nankivell” on June 30, 2017. This republished version has been lightly edited for clarity.

Jeff Nankivell has a lot of celebrating to do this summer. Not only is it the 150th birthday of his nation, but he is also nearing the completion of his first year as the Consul General of Canada to Hong Kong and Macao. On June 21, the Consulate held its largest anniversary reception at the Island Shangri-la Hotel, where the crowd not only commemorated Canada’s milestone, but also took in the strength of the Canadian community in Hong Kong. It is not surprising that Hong Kong and Canada are so deeply intertwined on numerous levels. In fact, the designer of the Canada 150 logo, Ariana Mari Cuvin, is a Hong Kong-born Canadian pursuing her undergraduate studies at the University of Waterloo.

From its friendly people to free healthcare, Canada’s reputation all over the world is one that brims with positivity. Though this is the case, Nankivell says that one of the major diplomatic objectives of Canada 150 is to draw attention to the important aspects of Canada that others would not know about. For example, Canada is a world leader in new and innovative fields such as artificial intelligence, machine learning, and fintech. He claims that there are great opportunities for collaboration amongst Hong Kong and Canadian companies that would enrich their project output as well as Hong Kong-Canadian partnerships.

“In Canada’s 150-year history, as a a modern nation, there are some moments in our history of which we are not proud[…] the way that [Chinese railway] workers were created is a part of our history that we have since worked to try to recognize and vow to do better.”

Nankivell points to the confidence of Horizons Ventures, the Hong Kong-based venture capital investment fund associated with Li Ka-shing, in Canadian innovation. Horizons Ventures has invested in more than half a dozen Canadian startups in fields of high tech, including Nanoleaf. Nanoleaf began in 2012 with a Kickstarter campaign for its energy-efficient LED lightbulb.

Other innovators include APrivacy, a startup based in Waterloo, Ontario. Its multi-channel digital security program enables secure communication between financial service providers and their customers over social platforms such as email or Whatsapp. CEO Cédric Jeannot decided to move to Hong Kong, along with some other senior company managers, in order to take advantage of the opportunities in the city, as Hong Kong has a large number of major financial institutions.

Canada has a lot to be proud of in its 150 years of existence since Confederation in 1867. Despite the positive name that Canada has made for itself on the international stage, “there are some moments in our history of which we are not proud, [such as] the treatment of the railway workers who came to Canada in the 19th century and played an essential role in building the national railway that linked the eastern provinces of Canada with British Columbia and the Pacific. The way that those workers were treated is a part of our history that we have since worked to try to recognize, and we vow to do better.” Canada has vastly improved since then; after the flood of Hong Kong immigrants in the 1980s and ’90s, Hong Kongers have made vital contributions to all walks of Canadian life. There are presently 300,000 Canadians in Hong Kong, most of whom are Hong Kong-born individuals who immigrated to Canada before returning back to develop their professional careers.

Unfortunately for the First Nations, Inuit, and Métis communities, the widespread discrimination they have received from the Canadian government since the country’s inception continues to persist today. At the Canada 150 Reception, Nankivell raised awareness of National Aboriginal Day, which coincided with the event, and discussed the importance of continuing to work on repairing the relations between Aboriginal and First Nations communities and the Canadian government. He believes that it is important as Canadians that, “we come prepared to talk about the things we have not done well, and to be modest and humble recognizing these things and talk about what we’re doing to try to make those things better. I think it’s an important contribution that we can bring into the world: that we are not only sharing our achievements, but also our challenges.”

A full reconciliation between peoples will take many years, but the government has recently developed long term initiatives that will span the next decade to address many of the struggles that First Nations communities face. “There is money that is being put aside in budgets over the next decade [and] significant new investments in infrastructure in First Nations communities, [some of which] to our shame, lack reliable sources of safe drinking water.” Nankivell also adds that money has been allocated to improve education in First Nations communities. Canada 150 is an opportunity to shine a light on the issue of reconciliation with First Nations, while also showcasing the three other themes running throughout the campaign (diversity and inclusion, youth, and environment).

“I think it’s an important contribution that we can bring into the world: that we are not only sharing our achievements, but also our challenges.”

Whether through policy, culture or the legal system, Hong Kong and Canada influence each other in numerous ways. Hong Kong and Canada are part of a community of common law jurisdictions, in which decisions in Canadian courts can be cited as precedent in a court case in Hong Kong, and vice versa. The Chief Justice of Canada was in Hong Kong in 2016 to take part in exchanges with their judicial counterparts. In the cultural sphere, there are Cantonese opera schools in Canada, where new Cantonese opera is being composed and performed in Toronto and Vancouver. Celebrities, such as the actress and Canada 150 ambassador Bernice Liu, work between Hong Kong and Canada in both English and Cantonese, taking part in the creation of media for diverse audiences.

The influence was felt at the event. The proud singing of the national anthem inspired the Chinese audience members to respond in kind for the People’s Republic national anthem, a rare raising of voices. Equally rare was an off script moment for the CE CY Leung, who complemented the Consul General’s command of Cantonese, equating it to that of his parents after they had lived in Hong Kong for 50 years.

Nankivell plays hockey every Sunday night with the SCIHL, a recreational hockey league, and to his delight he says that his teammates are “as dedicated to hockey as they are dedicated to Hong Kong.” He is also pleased to announce that he will be attending the Canada 150 events at Shore Steak Lounge and Terrace on July 1, serving up pancakes to the people…preferably with maple syrup.