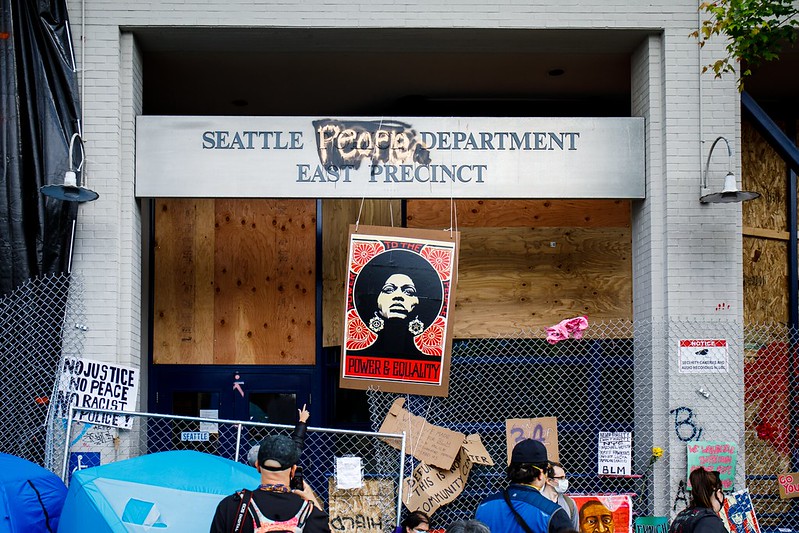 On the first Sunday of June, Seattle Mayor Jenny Durkan vacated the East Precinct in Capitol Hill in response to the escalating protests inspired by the death of George Floyd. By the end of the next day, protesters organized to occupy and close off six blocks of the neighbourhood around the precinct in order to establish an anti-police autonomous zone known as Free Capitol Hill, Capitol Hill Autonomous Zone (CHAZ), or most recently, Capitol Hill Occupied Protest (CHOP). While novel in its execution and duration, the demonstration, bolstered by Black Lives Matter (BLM) and self-identifying anti-fascists, stood on the shoulders of the neighbourhood’s history of left-wing activism and racial and class tensions.

The neighbourhood of Capitol Hill provided the city with an example of successful activism long before it was known as a hotbed for social movements. After city-planned segregation was ruled illegal by the Supreme Court in 1917, incidences of citizen-led segregation became more widespread, and in Seattle, a motion to segregate residential areas originated in Capitol Hill. Starting in 1927, many Capitol Hill residents began amending their housing deeds to deter ethnic minorities from moving north of Seattle’s urban centre. While variations of the deeds spread across the city, the covenants originated in the Capitol Hill Community Club who sought the financial support of the neighbourhood to continue and expand their use. Following World War II, the movement to end racial restrictive covenants was spearheaded by Christian Friends for Racial Equality (CFRE) in association with the Seattle chapter of the National Association for the Advancement of Coloured People (NAACP) and the city’s Civic Unity Committee. In 1946, the committee distributed pamphlets to inform citizens of the covenants that had grown out of Capitol Hill, which barred “specified groups because of race, creed, or colour” from home ownership. The neighbourhood was unique in that it set an expiry of the covenants after 21 years, which proved instrumental in the success of their abolition. The city of Seattle prohibited the renewal of the covenants in 1948, coinciding with a national ruling against racial restrictive covenants that same year. The radical shift of Capitol Hill from an agent for racial discrimination to its focus on social reform showed residents that demonstrations in the area would garner a response by the city, the effects of which Seattle still sees today: Seattle homeowners can now file to have any discriminatory language from this period removed from their deeds.

As Capitol Hill made its way into the fifties and sixties, the neighbourhood’s geographical irony became apparent: sandwiched between an increasingly political university campus and a liberal downtown core, the idea of Capitol Hill as a white enclave was both incredulous and unsustainable. Following the exodus of many homeowners, the neighbourhood saw an influx of artists and the working class, drawn by affordable housing and the opening of new businesses in art, design, and automotive sales. Capitol Hill subsequently became known as Seattle’s most tolerant neighbourhood when the culture hub grew synonymous with the LGBTQ+ community and a spillover of left-wing academics from the University of Washington. Both groups founded the neighbourhood’s longest running cooperative houses, including the Provisional Revolutionary Action Group (PRAG) house, which housed two of Seattle’s current local politicians. The commune, and others like it, held a tradition of being home to an array of academics, journalists, and public servants, establishing the houses as catalysts for Capitol Hill’s counterculture and many of its political movements. While Capitol Hill has been harbouring strong political convictions for a number of decades, the neighbourhood did not reveal the magnitude of its liberalist concerns until Seattle was chosen in 1999 as the site of the annual World Trade Organization (WTO) conference.

On November 29th 1999, the arrival of the WTO Conference in Seattle attracted legions of protesters concerned about the conference’s implications on worker legislation, environmental policy, international trade, and public education. What began as nonviolent demonstrations grew throughout the opening day of the conference, resulting in the declaration of a state of emergency, the police using tear gas, a public curfew, and a 26-block no-protest zone. Protesters were pushed from downtown into the residential areas of Capitol Hill, followed by officers on high alert. Consequently, escalating violence from all parties caused the neighbourhood to become the epicentre of demonstrations, centralized around the East Precinct. Following a week of poor response to the riots, Police Chief Norm Stamper tendered his resignation. In the collective memory of the neighbourhood, the incidents of the WTO conference centre around the success of protests to delay meetings and an impression of police brutality that led to a Capitol Hill vigil on December 3rd. An anniversary protest was also observed the following year, resulting in an additional 140 arrests. Two decades later, many WTO protesters gathered once more alongside a new generation in support of CHAZ.

For the duration of the Capitol Hill occupation, protesters called for the resignation of Mayor Jenny Durkan and full police defunding; as Seattle’s city council discusses a 50% reduction in police funds, the online petition for Durkan to resign has over 16,000 signatures, and a call for her removal has over 32,000. While the demonstration seemingly maintained a stable and cooperative climate within, a lack of visible leadership may have been the catalyst for its downfall: CHAZ advocated for reformed governance without having any distinct leadership outside the BLM mission statement. A shooting early in the morning of June 20th revealed the escalating climate of the protest, but it was not until protesters encircled Mayor Durkan’s home that the city’s leadership was provoked. Negotiating activists within the zone continually ensured officials that the occupation would remain safe, to the point that Durkan even condoned the demonstration, however the inaction of officials on all levels implies that much like during the WTO conference of 1999, the government had planned to wait the protest out. This was the first and only reported death from within the occupation, yet the repercussions from this demonstration extended not only to Seattle and its occupants, but also to other cities: Nashville attempted its own iteration of an autonomous zone on June 12, Portland followed suit on June 18, and Washington, D.C. experienced a brief “Black House Autonomous Zone” on the 22nd. All iterations were quickly prevented by their respective police forces, as Tennessee’s Governor Bill Lee announced that such measures will not be tolerated, and President Trump declared that a second attempt in D.C. would be “met with serious force.”

Amid worldwide protests, CHAZ stood out because of its timing and place. Situated between a history of effective protests and an election that pits the Democratic city against its presidential leadership, the occupation anticipated a drastic outcome in their favour. While its dissolution likely came as a shock to participants, a significant portion of the city’s activists still remain outspoken in their disapproval of Seattle’s political measures. Councilwoman Kshama Sawant continues to lead a crusade against Mayor Durkan, proving that Seattle’s lack of consensus on Capitol Hill makes it an anomaly of unresolved revolutions. As the neighbourhood cleans up CHAZ territory against this month’s backdrop of stars and stripes, Seattle’s unrest leaves more than independence to be longed for.

Featured image: “Seattle People Department” by Derek Simeone is licensed under CC BY 2.0.