Children of the Arab Spring 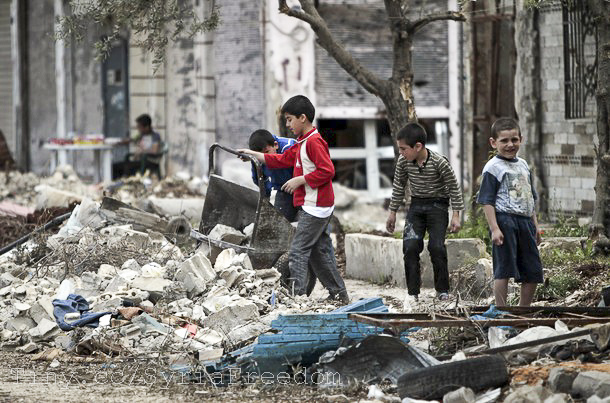 Last week the image of a four year- old Syrian girl, holding her hands up in surrender to a reporter’s camera, which she mistook for a weapon, went viral. The fear in the child’s eyes is a haunting reminder of the ongoing conflict in Syria, which is now entering its fourth year. The girl, Hudea, was four years old at the time the photo was taken at Atmeh refugee camp along the Turkish border where her mother, and two siblings fled to from their home in Hama 150 kilometers away[i]. She is a reflection of a portion of the Middle Eastern population that currently lives in the midst of fear, instability and violence.

Syrians face a dark fate. The conflict- which, has already claimed 220,000 lives, is unlikely to find any resolution in the near future. In an extensive report conducted on the Dynamics of the Syrian civil war in 2014, it was concluded that armed conflict would likely continue for many years and that for the foreseeable future no government will be able to rule over all of what comprised modern day Syria[ii]. The UN estimates that 7 million Syrian’s are currently internally displaced, with 3 million registered refugees, living in camps where there is a high risk for future potential terrorist activity[iii]. Moreover, even if the conflict were to end today, it would take decades before Syria could reflect the state it was prior to the war.

This is the manner in which these conflicts are spoken of- in numbers. Three million refugees, 220,000 dead, 7 million displaced; they are faceless figures, and the people whom they represent are lost in the sheer size of the tragedy. The numbers give little implication of the individual people who comprise the larger statistic. The heartbreaking image of Hudea touched so many because she served as an example of whom it is we mean when we speak of the millions affected by sectarian warfare. Mothers, fathers, siblings, children these are the people who are living with no certainty for their safety or future, and who have already experienced the heavy cost of the war. 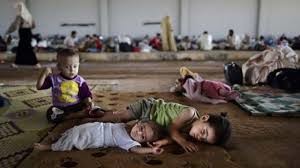 Of these individuals it is crucial that we contemplate the well-being of the children who are victims of the violence they were born into. According to the UN, more than half of all Syrian refugees are below the age of eighteen. Most of them have not attended school in months or years[iv]. While the older adolescents are often forced to bear major responsibilities such as caring for their families and siblings, the younger ones are scared, confused and lack a sense of safety and home life[v]. These children are of particular importance – they are the generation that will eventually bear the burden of rebuilding Syria- whatever it will look like at that point. The thought of these children begs an even more critical question. Who will these children become? What will their perceptions and capabilities be, given that they have lacked a consistent home and education? The generation that has known nothing but violence and war will at some point be charged with creating a new Syrian society.

Individuals like Hudea, who were born in the beginning of the conflict, know nothing but war. Her short life, along with many other young children cannot remember a time before violence. They were born into a circumstance that they played no part in creating- however this generation must somehow find ways to remedy the situation that claimed so many of their homes, and loved ones. The executive director of UNICEF stated: “Millions of children inside Syria and across the region are witnessing their past and their futures disappear amidst the rubble and destruction of this prolonged conﬂict. We must rescue them from the brink, for their sake and for the sake of Syria in future generations.”[vi]

This concept does not only hold true for Syria. Of the other countries that experienced the Arab Spring, Libya currently has two separate governments battling for control of the nation while Yemen, is in ongoing conflict between the established government and the Houthi rebels in the North[vii]. The deteriorating stability in the areas around Syria is partially occurring due to the massive spillover of refugees that is being absorbed by the neighboring populations with great difficulty. The role of ISIS in the region has caused further instability as governments are directing resources to protect Iraq and Syria from the militants.

As international humanitarian efforts rise to meet the refugee crisis it is crucial that special attention be paid to the children in the form of psychological support and education. The generation’s well-being bears important consequence on the future of their nations, and their experiences have already placed them in a disadvantaged position to deal with the enormous amount of rebuilding and repair their countries will eventually need.