Chile at a Crossroads 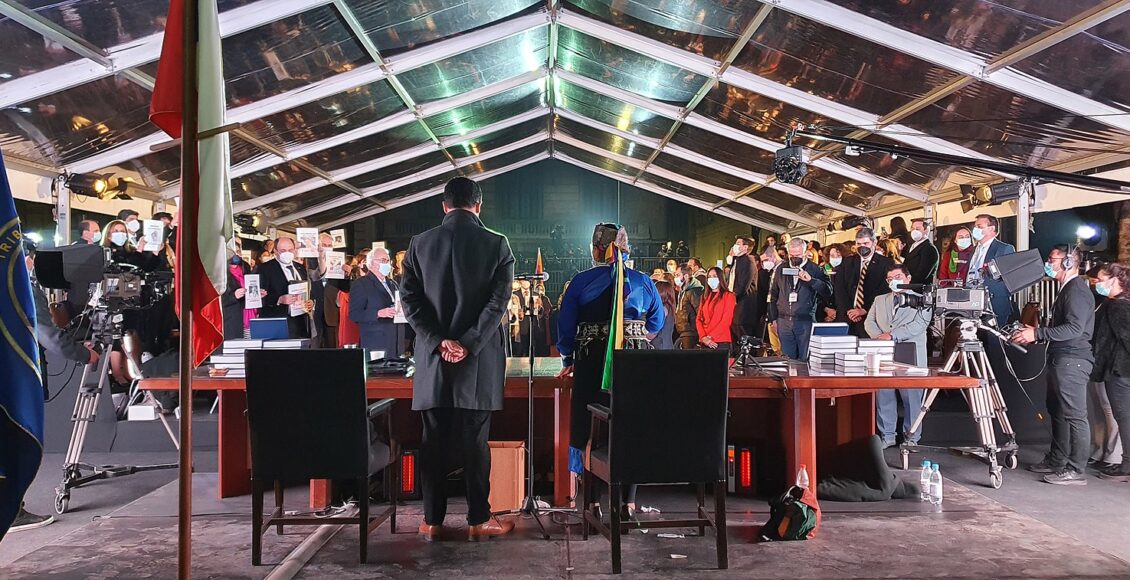 While Independence Day was being celebrated in the United States, July 4 took on its own political significance in Chile. It marked the start of the Chilean Constitutional Convention, a special legislative body brought together to draft a new constitution. Created in response to a wave of historic protests known as the Estallido Social (Social Outbreak) that have gripped the country since 2019, the Constitutional Convention may prove to be a turning point in Chilean politics. Centrist politics have dominated in the post-Pinochet era; however, two-thirds of the Constitutional Convention’s delegates are independents, and the Convention is decidedly more left-leaning than the Chilean legislature. Chile has a chance for a national rebirth, but it is unclear if potential reforms will succeed in putting the country on a radically new trajectory.

Understanding the history of this Constitutional Convention requires some background knowledge surrounding the Chilean constitution that preceded it. The previous document dates back to the dictatorship era, having been drafted by Augusto Pinochet’s regime to bolster his hold on power. This proved successful: after the constitution’s adoption through a referendum (which appears to have been rigged in favour of Pinochet), it gave him sweeping political powers, which he held onto until his peaceful ousting in 1989. There are also controversial laws associated with the old constitution that the Convention might seek to nullify. For example, one anti-terrorism law from that period has been used against the Indigenous Mapuche as recently as 2019, despite little evidence of Mapuche involvement in terrorist activity.

There have been numerous amendments to the constitution since the democratic government came into power in 1989. However, it appears that these incremental changes are no longer sufficient to satisfy the public. While the Estallido Social began as civil disobedience criticizing raised transit fares in Santiago, it soon escalated into a general anti-establishment movement, demanding that the government address Chile’s continuing economic and social inequality issues. The largest of these protests involved a multi-million-person march across the country in October 2019. The next day, the government announced a plebiscite on whether they should draft a new constitution. With roughly half the country participating in the vote, it approved in a landslide.

Given how long centrist politics have dominated the political conversation in Chile, the plebiscite’s results come as quite a surprise. Since the end of the Pinochet regime, two political coalitions have maintained control over the country’s legislature. Concertación (Coalition of Parties for Democracy) is the longer reigning of the two, a centre-left alliance which held the presidency between 1989 and 2010 and whose core member parties would later form the Nueva Mayoría (New Majority) in 2013 and then the Convergencia Progresista (Progressive Convergence) in 2018. The current centre-left coalition, composed of essentially the same parties, is called Unidad Constituyente (Social Unity). The other bloc is the right-wing Alianza (Alliance for Chile), briefly known as Coalición por el Cambio (Coalition for Change) and currently known as Chile Vamos (Let’s Go Chile). While the names and makeup of both blocs have changed over time, their political influence has not — they are the only coalitions to have won elections since democracy returned to the country.

A key piece of the public dissatisfaction with these blocs is that their rule is intrinsically linked to the dictatorship. The most influential member party of Chile Vamos, for example, supported Pinochet during his regime. While the founder of Concertación was an important figure in the return to democracy, he supported the military coup against the democratically elected president, Salvador Allende, which installed Pinochet in the first place. Furthermore, the continuance of Pinochet’s neoliberal economics under these parties has created severe inequality. While Chile has low-income inequality relative to other Latin American states, the country has the second-highest income inequality among its peers in the Organisation for Economic Co-operation and Development (OECD).

However, the Constitutional Convention has a chance to change all that, and its makeup alone says a lot about the difference between the institutional politics of the National Congress and the candidates who were selected for the Convention. Over one-tenth of the seats were reserved for Indigenous candidates by law, and gender parity was achieved through amendments to the old constitution, so two major marginalized groups have reasonable representation at this crossroads in Chilean politics. The independents who have been elected should not be looked at as one cohesive mass. However, all sorts of colourful figures are represented in the body, such as Tía Pikachu, a woman whose Pikachu costume during the protests catapulted her to a seat.

What will these representatives address problems that Chileans face today, and what sort of relationships will they forge with other members to achieve their goals? Some alliances among the members appear obvious. For example, an Indigenous representative was just elected president of the Convention thanks to joint support from a left-wing coalition, some socialists, and other Indigenous assembly members. Still, Chileans are looking for substantive progress, not only representation. To answer that, it is necessary to analyze the protests which are currently taking place in Chile.

One of the systems most in need of reform is schooling. In Chile, the education system is semi-privatized; there are many for-profit universities, with attempts to ban them deemed as unconstitutional under the old constitution. The need for reform here is clear: Tuition costs for a bachelor’s degree in Chile are incredibly high relative to those in other OECD nations, and staff are compensated at a far lower rate for their work. In addition, Chile has a shortage of education professionals, with a ratio of one primary school teacher to 28 students compared to a 1:21 ratio for the OECD. The Convention will likely ban for-profit schooling, or at least for-profit universities, which barely survived the previously-mentioned ban attempts by a 6-4 constitutional court decision.

On top of specific reforms, many observers are curious whether Chile’s constitution will be maximalist or minimalist in its regulations. Some issues driving the protests, such as the country’s private pension system, exist because of specific laws, not because of the constitution itself. The current constitution only states that people have the right to choose public or private pension systems. The Convention members may decide to ban private pension systems, but whether they do so is also a question of how prescriptive the assembly is willing to be. This will prove to be a particularly salient issue given the political inexperience of many of those involved in this effort: the Pikachu-costumed representative mentioned earlier is a bus driver, for example.

The Chilean Constitutional Convention presents a chance for the government to re-legitimize its legislation and make a meaningful effort to address daily problems that the average Chilean faces. However, given that the government must deliver the new constitution within a year and its authors must constitute a broad and inexperienced coalition, the result may be less effective than the document which Chile is leaving behind. While there is hope for reform, it remains to be seen whether the Convention will be looked back on as a failed experiment or a moment of genuine progress.

Rory is a U3 student double-majoring in Political Science and International Development. They are particularly interested in Latin American politics and the intersection of media and government policy.