Chilean and Haitian Protests: The Impact of Nationalism on Revolutionary Movements 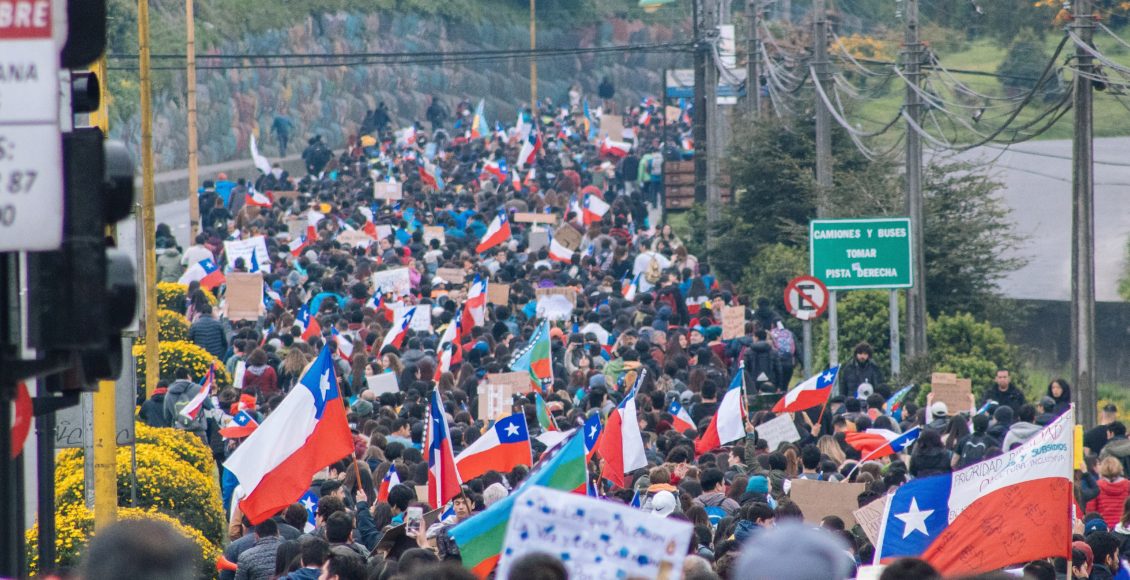 Nationalism is described as the identification with one’s own nation and support for its interests, often at the exclusion or detriment of the interests of other nations. It comes in different forms and ideological orientations, from the left as well as from the right. Historically, it has been used by different kinds of social movements, often being championed by more extremist groups. According to Andreas Wimmer, a professor at Columbia University, “in the 1920s, 30s, and 40s, [nationalism] was allied with right-wing, even fascist tendencies.” Recurrent negative effects of nationalism include: conflict with others, infringements on rights of others, and xenophobia. However, in the developing world, “it’s also been allied with left-wing communist movements and anti-imperial, anti-colonial movements.” Nationalism, therefore, doesn’t have a political colour of its own. For countries like Chile and Haïti, nationalism has encouraged collective solidarity and has led people to work for a national common good.

Nationalism as a motivating factor that unites diverse social classes behind revolution and often emerges as a reaction to colonial or neocolonial domination. The concept of ‘imperialism’, seen as an exploitative international system, has been perhaps the most widely used of all Marxist-Leninist categories, influencing not only all sections of the communist movement, but much of Global South nationalism as well. Throughout the years, many leaders of the Global South—from Latin America to Africa, the Middle East, and Asia—have been drawn to Marxism-Leninism as a natural outlet for translating nationalist sentiments into a plan of action for economic growth, political rule and social progress. For them, Socialism holds a special ideological appeal due to its anti-colonial concepts for ex-colonial histories and political cultures in Global South arenas. Many of these revolutionary movements against neocolonialism are centered on nationalistic sentiments known as national liberation movements, which champion national self-determination as a means of freeing themselves from the everlasting chains of foreign domination.

In Chile, the spark that lit the flame, so to speak, of the recent protests was a 3% hike in subway fares from Chilean president Sebastián Piñera on the 6th of October. After several days of mass, violent protests, Chile’s unrest transformed into a nationwide uprising to demand dramatic changes to the country’s economic and political system. Although income had risen in Chile over the previous years, high inequality had also led to higher cost of living. Santiago is the most expensive city in Latin America, after Montevideo. The fact that Chileans who earn minimum wage spend almost 14 percent of their income on transit alone explains why the small increase in the subway fare triggered such outsized reaction among Chileans.

According to Nicolás Saldías, “Chile’s legacy of privatization of basic services extends much further than in other countries.” Higher education, health care, and pensions are all privatized to one degree or another. Even more, the costs of privatization are borne by those who can least afford it: the youth and the elderly. As of October 30th, 2019, eighteen people had died in the violence and 7,000 had been arrested, prompting numerous allegations of human rights abuses by the security forces.

The neoliberal policies against which Chilean people are protesting come from a set of liberalising economic measures implemented during the dictatorship of former Chilean general, Augusto Pinochet, which imposed a free market system with the support of the United States. This economic system, that continues to exist in Chile today, has benefited the minority economic elites while disenfranchising the non-elite majority. It is therefore unsurprising that Chileans have taken to the streets to achieve real change regarding how their government manages their economy.

Haiti is also rising up against the corrupt and U.S.-backed government of Jovenel Moïse. Protesters are demanding not only an explanation for what happened with the millions of dollars received from Venezuela, but also an end to neoliberal policies that have been backed by the United States. Near-daily protests in Port-au-Prince, as well as in other cities, both urban and rural, have shut down transportation links, shuttered businesses and closed schools, paralyzing the Caribbean nation of 11 million. At least 18 people have died in clashes with police as well as from other forms of violence. Sadly, instability is not a new phenomenon in Haiti. The Caribbean nation has long struggled to achieve peace since the Anti-Duvalier protests in 1986 ended 28 years of dynastic dictatorship by Francois “Papa Doc” Duvalier and his son Jean-Claude “Baby Doc” Duvalier.

For Haiti, the last few decades have been marked by coups, unrest and foreign interventions. The director of the human rights advocacy group Je Klere Foundation, Marie Yolène Gilles, is no stranger to political unrest, violent coups d’états, and foreign occupations. Like many Haitians, she blames the United States, which has been implicated in Haitian politics from buttressing to helping bring down governments in Port-au-Prince since the nineteen-year occupation by U.S. Marines beginning in 1915. Amidst the current protests, Haitians are defending their right to determine their own fate, to overthrow and to replace the current corrupt neoliberal government. They have asked the international community to oppose the United States and its imperialist allies as they fight for their nations right to self-determination.

Chile and Haiti are not the only countries in Latin America fighting back against neoliberalism and Western imperialism. Other nations like Ecuador are also revolting against neoliberal austerity. These countries, as well as many others around the world, are demanding for complete sovereignty over their governments and national interests as well as their right to chose their political and economic systems.