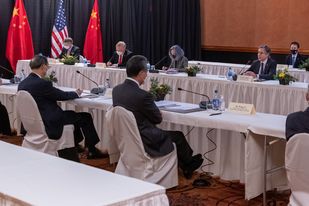 On March 18 and 19, 2021, China and the United States held a series of talks in Anchorage, Alaska. Some media outlets have referred to this meeting as the “2-plus-2 dialogue,” as both sides sent their two highest-level diplomats to discuss the direction of Sino-US relations. Director of the Central Foreign Affairs Commission and CCP Politburo member Yang Jiechi, and Foreign Minister Wang Yi are the Chinese representatives. The US was represented by Secretary of State Antony Blinken, along with National Security Advisor Jake Sullivan.

The summit had garnered significant attention before even taking place. Not only was it the first meeting between top Chinese and US diplomats since June 2020, but it also signalled crucial implications for the Biden administration’s policies towards China.

Since his election, Biden’s administration has been vague on its policies towards China. Although Biden maintains that he does not want conflict with China, he nevertheless referred to the state of Sino-US relations as being in “extreme competition.” The hostile sentiment was further and more explicitly expressed by Blinken, as he agreed with Trump’s tough stance on China (but not his approach), and openly violated the promised “One China Policy” by referring to Taiwan as a “country.”

In other words, though it is nominally different, the Biden administration has basically maintained most of Trump’s China policies. The most significant difference between their policies is that, unlike Trump, Biden has a much more realistic assessment of the US’s strength and realizes that he must turn to his allies in order to successfully suppress China’s political,  economic, and technological development.

Whether American diplomats came to the meeting with an appetite for negotiation is up for debate. Just days prior to the summit, Blinken visited both Japan and South Korea in order to reaffirm their alliances with the US. In a joint statement with the Japanese, the US stated that China’s “disruptive developments” within the region posed significant political, economic, and military challenges. The US also reaffirmed its commitment to defend the Senkaku Islands, the disputed maritime territory between China and Japan that is also known as Diaoyudao Islands. By exerting these geopolitical pressures onto China, it is clear that in entering the summit, the US was desperately seeking the upper hand.

Moreover, because of the Biden administration’s constant, unbridled rebuke for China’s domestic and foreign policies, the Chinese came prepared for a full-scale retaliation. In fact, just one day prior to the meeting, the US imposed another sanction on 24 Chinese officials under the so-called “Hong Kong Autonomy Act.” As Minister Wang Yi pointed out in the meeting, this is “not supposed to be the way one should welcome his guests.”

The summit itself had been fiery since the very beginning. Despite the fact that reporters were only allowed to enter the meeting for the brief four-minute opening remarks by both sides, the remarks wound up lasting for over an hour. In the media footage, it is apparent that both sides completely disregarded the language of diplomacy as they conducted their dialogue in an extremely blunt manner.

There is no doubt that both sides sought to use this meeting as a tool for domestic propaganda. China’s attempts were more explicit and public, however, as some of Yang Jiechi’s quotes were instantly made into shirts and publicly promulgated through various channels. One particularly influential quote is that  “the United States does not have the qualification to say that it wants to speak to China from a position of strength.” It has been repeated countless times through online platforms and TV channels as a symbol of China’s strength and stand against the West.

As for Blinken, it is also vital that he remain tough on China in order to complement the US’s hostile stance towards China, especially from the Republican side. The issue of China is one of the very few topics where both Democrats and Republicans can agree given their current differences. We can see this trend from Biden’s new infrastructure bill, where one of the primary motivations seems to have been to catch up to China’s infrastructure expansion, which includes the well-known Belt and Road Initiative. As the Democrats do not have a consolidating majority in the Senate, they would need to unite as many Republicans as possible in order to pass Biden’s legislation. To this end, the “China card” is definitely one of the most appealing tools.

Despite serving domestic purposes, this meeting also holds significant foreign policy implications. First, it is worth noting that while the Biden government has been relatively inconsistent in its Taiwan policies, Blinken still listed the Taiwan issue parallel to the topics of Xinjiang and Hong Kong. Whereas both regions are widely acknowledged as a part of Chinese territory, Taiwan could be much more disputable. This shows that the Biden government is extremely reluctant in using Taiwan as a negotiating tool with China. The administration realizes that this topic is simply too sensitive and risks sparking military clashes around the Taiwan Strait given the current intense relationship between Beijing and Taipei.

Another notable implication in this meeting is that China has started to criticize the US’s hypocrisy in its own human rights issues and political system. Due to China’s principle of non-intervention, China has been extremely quiet about the domestic situations in other countries. However, in this meeting, China not only pointed out that “Many people within the United States actually have little confidence in their own democracy”, but also referred to movements such as Black Lives Matter to criticize the US’s human rights crisis at home.

Although the meeting is largely regarded as a bitter failure in the attempt to improve Sino-US relations, it must be pointed out that most conclusions are made based on the open and fiery exchange of the first meeting. In fact, according to Blinken, in the press conference after the summit, both sides did find their interests converging on issues such as Iran, North Korea, and climate change. Therefore, although both sides seem to have fundamental differences in most areas, particularly those involving China’s sovereignty, there is still room for cooperation. Moreover, the very fact that both sides agreed to meet is already a positive sign. Compared to the end of the Trump presidency, where the US and China ended all dialogues, this is a notable improvement.

However with both sides trying their best to strengthen their alliances, it is apparent that the conflict is far from ending. Following the Anchorage talks, Minister Wang Yi immediately met with Russian Foreign Minister Sergey Lavrov and signed a deal with Iran where China would invest $400 billion USD in exchange for oil. According to Zbigniew Brzeziński (former National Security Advisor and a McGill alumnus,) the formation of the new alliance between Beijing, Moscow, and Tehran, could signify a new era of confrontation between land power and sea power.

There is no doubt that the US-China relationship is the world’s most significant bilateral relationship. Constant communication is absolutely vital for both sides in order to avoid any possible confrontation. If the hostility continues to escalate, there would not only be severe consequences for Chinese and American citizens, but for the rest of the world as well.

Featured Image: “Secretary Blinken and National Security Advisor Sullivan Meet with CCP Director of the Office of the Central Commission for Foreign Affairs Yang Jiechi and State Councilor Wang Yi” by the US Department of State is licensed under CC0 (public domain).