China’s Three-Child Policy Is a Threat to Working Women 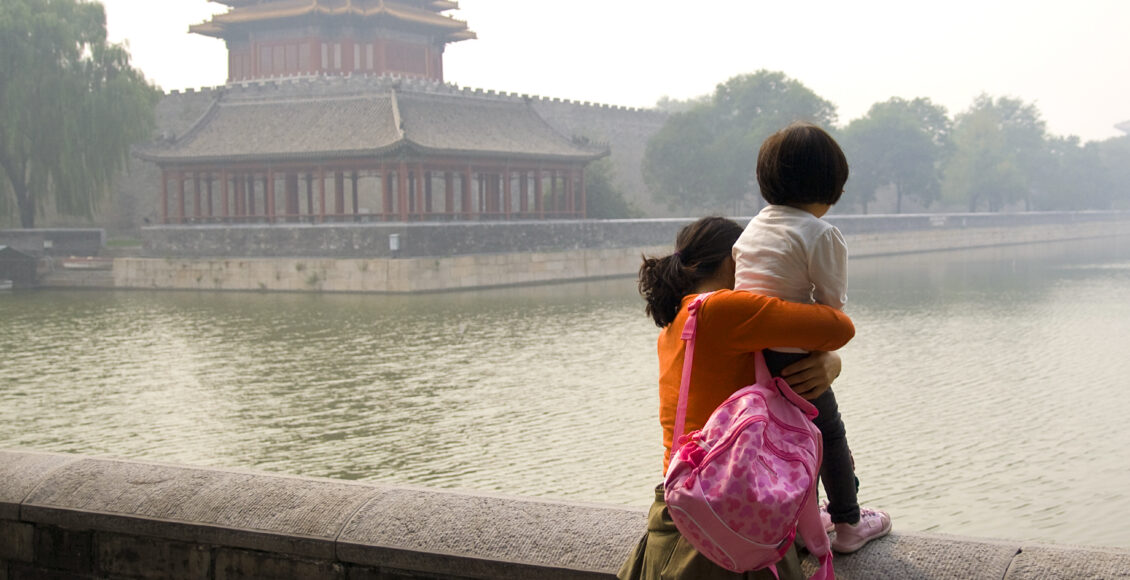 On May 31, the Chinese government announced a new three-child policy. The relaxed quota responds to a concerningly slow birth rate, rapidly ageing population, and diminishing workforce. Although the policy aims to combat a looming demographic crisis, it will likely have negative implications for working women, based on the effects of China’s preceding one and two-child policies.

To combat uncontrolled population growth, China introduced a one-child policy in 1979. For almost four decades, the CCP enforced it through strict measures, including heavy fines and forced sterilization. The cultural preference for male children led to sex-selective abortions and female infanticide — responsible for a gender imbalance that has left China with an estimated 30-40 million “missing women.” Although the one-child policy slowed population growth, it caused widespread trauma and is partly responsible for China’s current demographic crisis.

With the country facing a diminishing workforce and ageing population, the limit expanded to two children in 2016. Although a codified one-child rule no longer existed, birth remained implicitly regulated and heavily stigmatized through different, more social, mechanisms. Women became targets of gender and pregnancy-based workplace discrimination, as employers preferred male candidates or women with children. The two-child policy failed to protect women in the workplace and was unable to increase birth rates. Based on the increase in gender inequality following the two-child quota, gender-based workplace discrimination will likely worsen under the new three-child policy.

Many Chinese citizens are skeptical about the state’s renewed effort to control childbearing. Online discussions are ripe with worries about the new policy’s effects on employment and families and how unfair population policies are for women. Many women worry about being pushed out of the labour market and losing the right to equal work opportunities with relaxed birth quotas. There is very real concern that discrimination against Chinese women will only worsen with a three-child policy.

Openly discriminatory hiring requirements leave working women at a disadvantage. Despite being illegal, many job ads list a distinct requirement for men or married women with kids, and other employers convey such a preference during the hiring process. In 2020, 11 percent of postings on the Chinese government’s national civil service job list specified a preference or requirement for men. The preference for married women with kids also disadvantages single women and those with no or fewer children. Under the three-child policy, women with two kids can now legally have another, making them “risky” hires in employers’ eyes and, thus, prone to discrimination.

Zhaopin.com, one of China’s largest recruitment sites, found that 58 percent of women in 2020 were asked about their marital and childbearing status in interviews. There may be no “right” answer to satisfy employers: women with no children could eventually require maternity leave, and women who have children are often seen as too busy and less productive.

Some employers also force women to sign contracts dictating when they can have children. Women then wait their turn for pregnancy in their company’s line of female employees — an image that uncomfortably conveys the level of control over women’s fertility. Getting pregnant off “schedule” has consequences and, even without such an agreement, many women are demoted, fired, or fined after getting pregnant. The transition towards a three-child policy will not challenge these institutional mechanisms of gender discrimination.

Women are often not hired based on the assumption they will eventually need maternity leave. If hired, they may face the consequences for taking leave, barriers for more women under the three-child policy. Mothers also get more time off than fathers, whose paternity leave is shorter or nonexistent under provincial jurisdiction. From an employers’ perspective, it costs more to hire a woman. The government’s unequal and insufficient policies give companies little incentive to stop discriminatory practices. 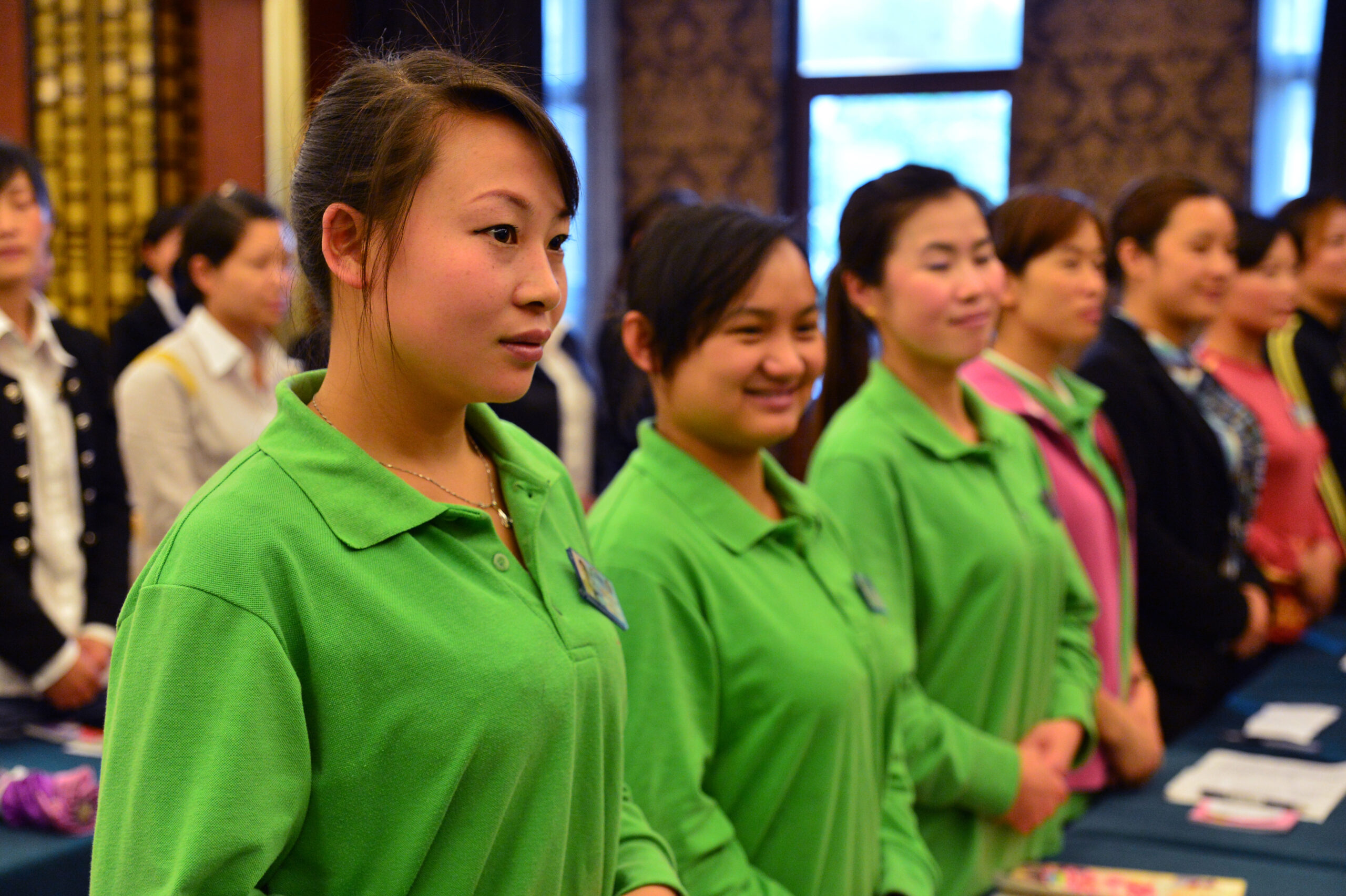 Working women in training. “On-the-job training” by World Bank Photo Collection is licensed under CC BY-NC-ND 2.0. Since the implementation of the two-child policy, describing women as “time bombs” has become a common narrative in China. Women could have two children, requiring maternity leave twice; employers thus anticipate this “explosion” of demands to go off anytime. Under the three-child policy, women with two children could still require maternity leave, making them uncertain hires. Sixty-four percent of Chinese women in 2020 listed childbearing as a reason for gender inequality in the workplace. This statistic will likely increase under the new three-child limit.

The lack of enforcement of anti-discrimination laws under the two-child policy bodes poorly for women’s experience under the three-child quota. Despite the Chinese government’s claimed commitment to women’s emancipation, they ineffectively implemented anti-discrimination policies. For example, China’s laws banning companies from firing pregnant women or lowering their salaries lack specific enforcement measures. Despite a 2019 Chinese government directive banning discriminatory hiring practices, including inquiring about women’s childbearing status, such practices have continued. Many women are discouraged from pursuing legal action, as China’s overly bureaucratic legal system has insurmountable requirements. On the rare occasion that employers face punishment, they aren’t effective in deterring companies from future discriminatory practices. Unenforced laws without consistent consequences do little to support women’s labour rights actively.

In addition to the discriminatory labour market itself, traditional gender norms in Chinese society still place women as primary caregivers. Chinese researchers argue that the shift to a socialized market economy is responsible for an intense work culture that revived patriarchal ideologies and relegated most childcare and housework to women. The increased gendered division of labour has contributed to workplace discrimination and declining female representation in government and business. State policies themselves, like China’s lack of national paternity leave, indicate women alone are responsible for childcare. These policies continue to promote traditional gender roles and do nothing to discourage employers’ discriminatory behaviour.

China’s ranking in the World Economic Forum’s 2021 Global Gender Gap Report was 107 out of 156. This is the 12th consecutive year that China has dropped in this ranking — from 57th in 2008. The Chinese government overlooks women’s needs in the demographic plans. While the three-child policy perpetuates state attempts to address population and economic growth, neither can be improved without supporting working women and providing social services that allow people to have the children the government desperately wants. The lack of state spending on family support contributes to discrimination against women and diminishes the likelihood of increasing births.

To a surveillance state like China, population control is crucial. Instead of removing birth quotas, the government has raised its limits and reiterated its command over women’s fertility. Child quotas send a message to Chinese women that giving birth is not entirely their choice, as it hasn’t been for almost 40 years. Human rights organizations explain that child quotas, even when relaxed, violate reproductive rights and are an invasive means to control family planning. Women are not tools to increase fertility, and they should not exchange their rights for having more children at the state’s desire.

Featured image by Dimitry B. is licensed under CC BY 2.0.