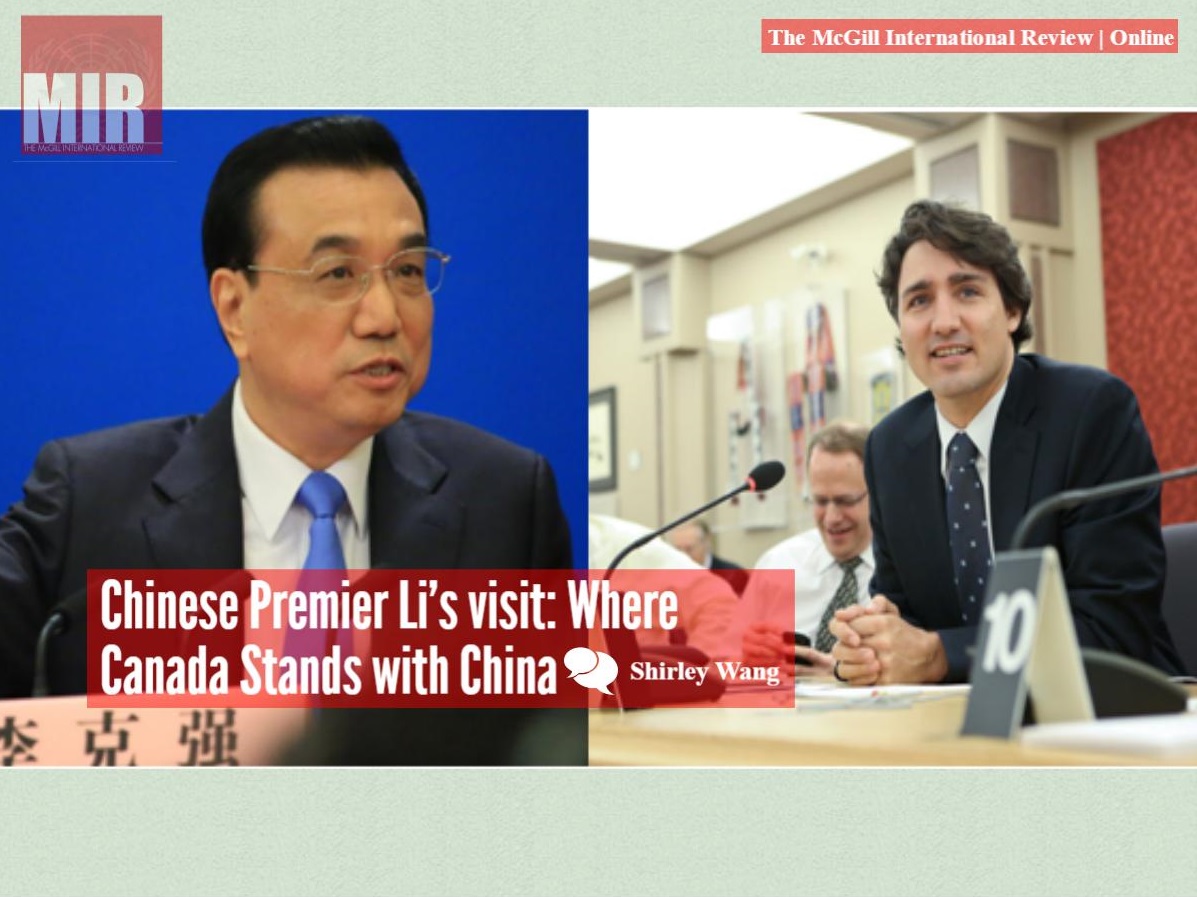 From September 21st to 24th, all eyes were on Ottawa as Canada played host to Chinese Premier Li Keqiang in what was considered to be a definitive milestone in Sino-Canadian relations, marking the first visit by a Chinese premier in 13 years. The visit also further marked the inaugural “Annual Dialogue” between the two countries, a breakthrough initiative between the two countries in light of Canada’s frosty attitude toward China during the past decade under Prime Minister Harper. This reunion followed the visit Prime Minister Justin Trudeau paid in late August to Beijing, which effectively opened a dialogue between the two leaders, for the first time since Trudeau’s election in late 2015.

The visit began in high spirits; it would, according to Li, bring together “true friends who feel close even when thousands of miles apart… symbolizing the prosperity of China-Canada all-around co-operation.” Trudeau, on his part, enthusiastically framed the visit as a way to deepen “understanding between [the] two countries and work on growing [their] economies and strengthening the middle class.”

Unfortunately, despite this ebullient initial outlook, the constant media coverage of Li-Trudeau handshakes, and the comprehensive Joint Statement  released by the two governments following the visit outlining 29 goals of bilateral cooperation, it is unlikely that any significant change in Sino-Canadian relations will be achieved —especially in regards to Canada’s political and economic gains addressed through treaties, or Canada’s advancement in standing within the Sino-Canadian relationship.

Underneath all the political veneer, the four-day visit was not much more than a politically opportunistic and superficial display, manufactured to be mutually beneficial for both leaders in two major ways. Firstly, this diplomatic performance was contrived to increase the global reputation of each country’s international relationships, as each strives to be perceived as the unifier of East and West via harmonious global cooperation. For example, included in the 29 points from the Joint Statement was a reaffirmation of both countries’ respect for the 2015 United Nations Climate Change Conference in Paris. By including this reaffirmation, China and Canada attempted to improve their own images as pro-active global stakeholders “work[ing] together… to strengthen the global response to climate change.” Although commendable, actions such as these do not actually constitute new steps toward strengthening Sino-Canadian political or economic ties; they simply reconfirm the pre-existing agreed-upon language from last December. Thus, actions and agreements such as these are not evidence of the real progress promised; they actually run contrary to the progressive narrative circulated by Trudeau’s government by acting as a façade of supposed change.

Secondly, this visit was similarly contrived as a move to strengthen each leader’s popularity in their respective domestic spheres individually. To Li, this visit was a way to potentially reinvigorate the Chinese public’s view of his political importance and prowess on a global stage, as he remains embroiled in a factional dispute within the Communist Party and struggles to maintain political traction against President Xi Jinping. For Trudeau, on the other hand, the political opportunities at stake are even more apparent. The discussions about “deepening understanding” and “renewing the relationship” may simply be veiled rhetoric intended for domestic political consumption. By demonizing the Harper government’s approach toward China and characterizing it as “insufficient”, Trudeau may be attempting to engender political support for the Liberal Party. Moreover, all the rhetoric of supposed economic improvement and free trade may just be Trudeau’s attempts to stimulate Canada’s economic bottom line – demonstrating his apathetic prioritization of the possibility to tout positive economic growth in the next election over possible long-term economic risks for Canada.

Because these intrinsically personal political motivations on the parts of both leaders outweigh any desires to functionally strengthen political and economic ties, it is unlikely that we will see the substantive progress in Sino-Canadian relations that the Joint Agreement appears to promise. If Trudeau had actual intentions of digging down and working to improve Canada’s relationship with China, he would have approached Beijing in late August —or at least during Li’s reciprocal visit a month later— with a comprehensive foreign policy strategy in regards to China and an outline of Canada’s diplomatic and economic goals. However, he failed to do so. Instead, an undirected and vague policy approach along the lines of ‘increasing engagement’ has emerged. What Trudeau wants to achieve with China remains unclear. It seems that even his own party has not figured this out yet, exemplified by the differing claims originating from Foreign Minister Stéphane Dion, Internal Trade Minister Chrystia Freeland, and the PMO, in terms of extradition treaties and economic policy. The question thus becomes whether this political show stems from the simple international inexperience and naïveté of Trudeau or from a Machiavellian desire to appear more politically pro-active than he actually is willing to be with China.

Regardless of this question, using such a fragmented approach is not a strong position to be in, especially when dealing with a global superpower such as China, home to the second largest economy in the world. Canada, by contrast, trails at 10th in the world. Furthermore, whereas China is Canada’s second largest single-country trading partner, Canada is only China’s 13th largest. It is clear that Canada needs China more than China needs Canada economically. Because of this power imbalance, China could very easily become a threat in a more involved bilateral relationship. In fact, Canada’s weaker role in the Sino-Canadian relationship has been a dominant theme in much of its interaction with China in past years. Take Prime Minister Harper’s foreign policy towards China for example. Initially taking a more confrontational approach, Harper made a stand for democratic Canadian values by decrying the Chinese government’s systemic humanitarian abuses. Unfortunately, he was later forced to revert to a more lenient and engaged approach to China after economic crises caused suffering in the Canadian economy but left China relatively unscathed. The sheer power and reach of the Chinese economy are able to force Canada into undermining pre-existing policy and disregarding —almost condoning— humanitarian abuses.

Additionally, Canada playing victim to China in the recent canola dispute further contributes to its weaker position in the relationship. After a bilateral agreement involving a promise from China to purchase four years of Canadian canola seed, China unexpectedly announced a possible termination of the agreement this summer, focused on unfounded technicalities, threatening a $2.6 billion loss in annual trade for Canada. A unique feature of the conflict is that China actually is not even facing a current need for canola oil. On the contrary, it has six million tonnes of it in reserves –which conveniently serves as extremely effective political leverage against a Canada whose economy relies so heavily on it. This economic domination gives China the upper hand in any political negotiation, providing it the ability to employ coercive economic tactics to bring about a favourable result. This often comes at the expense of Canadian gain in the relationship, as represented in the negotiation of the extradition treaty that China is so heavily pursuing at the current moment. Thus, Canada needs a more aggressive and exhaustive policy in regards to China —it cannot allow itself to be further taken advantage of, nor can it risk missing out on potential business with the largest economy in the world.

Although this blatant weakness from Canada’s foreign policy was not as apparent in Li’s September visit, the 29 points made and the goals set were indeed primarily artificial, most likely yielding no real advantage to Canada. Trudeau must synthesize a comprehensive, strategic, and action-based approach to his dealings with China in the future, lest he risk the possibility of falling victim to past trends of inaction or, potentially, China itself.