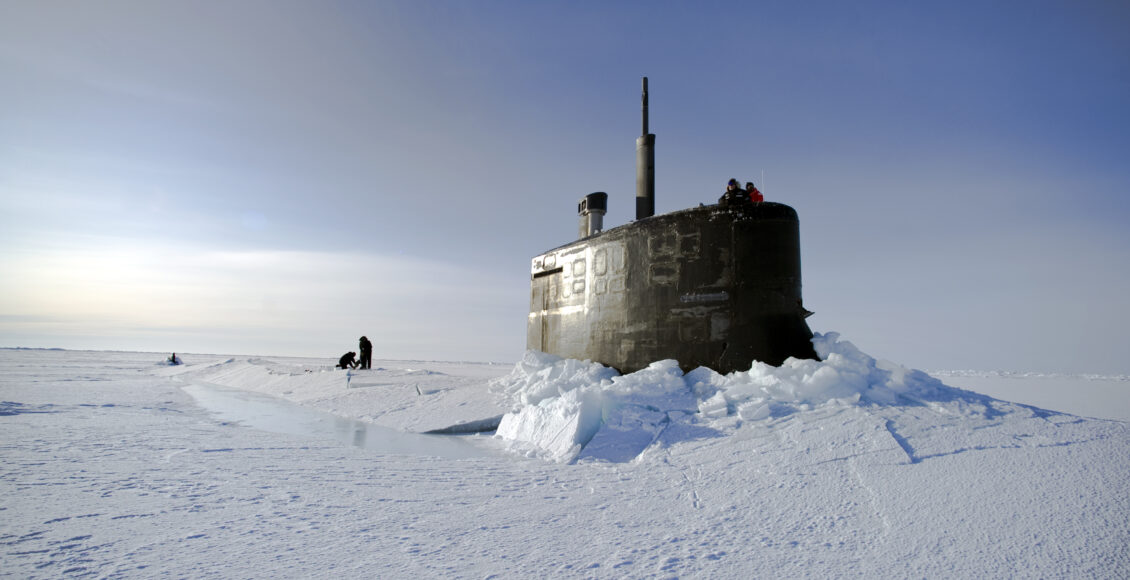 USS Connecticut as it surfaces through the ice during a military exercise in the Arctic. The High North is rapidly becoming an emerging theater of great power competition due to the impacts of climate change.
Share

The scientific consensus is overwhelming when it comes to the fact that our climate is changing. These changes have had significant impacts on humans across the world. For instance, the acidification of marine environments from carbon emissions is a threat to marine species upon which more than one billion people depend on as their primary source of protein. Meanwhile, the increased intensity and frequency of extreme weather events due to climate change have come at a tremendous human and economic cost.

The impacts of climate change oftentimes reach well beyond national borders. As states grapple with the varied consequences of environmental changes within their own territory, their actions can have significant impacts on other states. For instance, the melting of the Himalayan glaciers, as brought about by climate change, has posed a severe risk to countries dependent on its tributaries for water and agriculture. The Brahmaputra river, which originates in the Chinese-controlled territory of Tibet and flows through both Bangladesh and India, is effectively under complete Chinese control as it can redirect water away from downstream tributaries. Indeed, indications from Beijing that it wishes to dam up the river to divert water to barren regions within its own territory are perceived with great concern by Bangladeshi and Indian decision makers. As the impacts  of climate change reach beyond national borders, it becomes clear that it threatens to erode national sovereignty. However, beyond climate change’s challenge to the central tenet of the Westphalian system, it also constitutes a more immediate threat — that of armed conflict.

The ongoing conflict in Darfur has been dubbed the “first climate change conflict” by former UN Secretary General Ban Ki-Moon. As a result of a sustained period of severe drought, desertification claimed land at an alarming rate in much of Sudan. Farmers thus became climate refugees within their own country as erosion of former agricultural lands made farming impossible. Forced to resettle due to alterations in the natural environment, these internally displaced persons came into competition for resources with farmers in other parts of the country — competition for resources soon turned violent.

While the inherent complexities of armed conflict are many and difficult to quantify, states are becoming increasingly aware of the challenges posed by climate change. The United State’s Department of Defence (DOD) is the world’s largest institutional user of petroleum and correspondingly the single largest producer of greenhouse gases in the world. Nevertheless, the actions of the DOD are to a large extent influenced by considerations pertaining to how climate change may pose a strategic threat to US national security. Beyond the more basic challenge of extreme weather ripping military bases apart, as was the case in March 2019 when one-third of Offutt Air Force Base was flooded, climate change can have significant national security implications. The DOD has therefore sought to determine how climate change may challenge future operations, despite the Trump administration’s unwillingness to accept climate change as real. While it may perhaps appear paradoxical that the most conservative organization in the US government is that which takes the risk posed by climate change the most seriously, the reality is that it has become well-accepted within the department that climate change poses a threat to US national security. This is what ultimately led President Trump to inquire as to whether or not purchasing Greenland from Denmark would be feasible.

While Trump’s query remains as absurd today as in 2019, and received much ridicule domestically and internationally, its basic premise is ultimately rooted in a strategic logic. As glaciers are retreating, exposing previously inaccessible natural resources and shipping routes, great powers are seeking to expand their spheres of influence. The Arctic is therefore emerging as the newest theater for great power competition. For Trump, securing sovereign rights over Greenland would effectively enable the US to gain strategic forward operating bases in case of armed conflict. While historically considered unthinkable, warfare in the Arctic between great powers has become increasingly likely in light of Russian militarization of its northern territories and China’s significant commercial interests — both of which have been made possible by changes in the natural environment.

Due to the threat posed by climate change, researchers have become increasingly interested in determining its impact on armed conflict. For instance, a 2019 study estimates that over the past century, 3-20 percent of armed conflicts have been influenced by climate change. Notably, it has been found that “deviations from normal precipitation and mild temperatures systematically increase the risk of conflict”. As such, while armed conflicts are difficult to theorize, it is clear that there is some measure of interdependence between the two variables.

The Syrian Civil War provides yet another example of the relationship between climate change and armed conflict. Before Syria descended into a civil war in 2011, it went through one of the worst droughts in its history, which has been attributed to a century-long trend towards warmer and dryer conditions in the Eastern Mediterranean. The lack of water hit the agricultural sector especially hard as farmers were unable to grow crops in the arid soil. As a consequence of poor agricultural outputs, in excess of 1.5 million people from rural areas were displaced. Much like in the case of Sudan, these displaced persons were forced to migrate. Moving to the large cities, a lack of opportunities and resources effectively stripped the regime of its legitimacy — significant social unrest soon followed.

Despite climate change impacting every country on the planet, the governments most likely to face the greatest political challenges are oftentimes those least prepared to face the consequences. As weak governments struggle to provide their populations with access to basic resources, extremist groups seek to undermine states by providing destitute populations with supplies. The small fishing villages surrounding Lake Chad, the principal life source of Western and North-central Africa, serve as an example of the way in which extremist groups benefit from climate related challenges. Since the 1960s, the lake has shrunk by over 90% due to climate change. As a result, the nearly 100 million living in the region now suffer from poor access to water and food, problems which have been compounded by the central government’s inability to provide access to education, rule of law, and social services. The militant Islamist group Boko Haram has in recent years seized the opportunity created by human insecurity in the region to gain territorial control “by promising access to basic services and Islamic education”. Extremist groups are therefore able to operate more effectively, while already weak governments are further destabilized.

Featured image “USS Connecticut Surfaces Through the Ice During Exercise” by U.S. Navy is licensed under CC0 1.0 Universal.