Climate Change in the Developing World: The Drowning of Jakarta 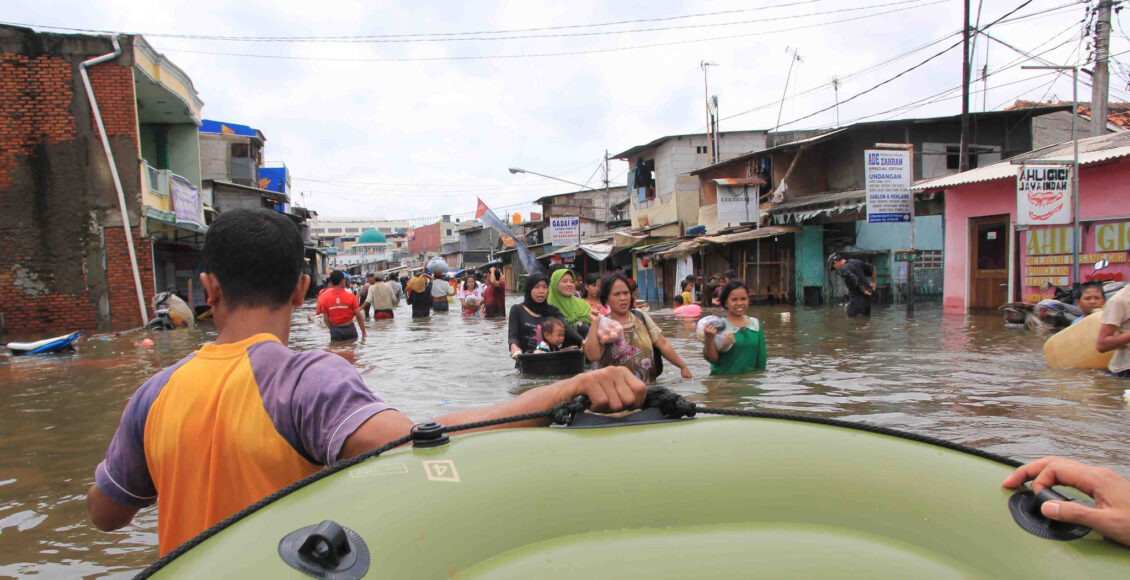 Often called the world’s fastest sinking city, Jakarta — Indonesia’s capital and most populated urban area — sinks 10cm deeper into the earth each year. A variety of human-induced processes created this problem, but one in particular is pushing it to the brink of disaster: global warming. For this article, I interviewed some Indonesian relatives for their perspectives on the drowning of Jakarta, hoping to look into how climate change is most hurting the places least equipped to deal with its consequences.

I had the chance to visit Jakarta in the summer of 2019. The ground I was standing on when I took a picture of the city’s shoreline, shown below, has now sunk thirty to forty centimetres since my visit, relative to sea level. It does not sound like a lot — that is only the length of a ruler — but minor tweaks to the order of the natural world can translate into major disorder in the human one.

A city of 11 million people, 40 per cent of Jakarta currently sits below sea level — a number that grows each year. The fastest sinking rates occur in the coastal sector, North Jakarta, where the ground drops as much as 25cm annually. Life at negative altitudes is marked by vulnerability to extreme weather and flooding. In fact, parts of North Jakarta are already flooded for good. By 2050, at present rates, that entire quarter of the city — containing the same number of residents as Montreal — will be permanently swallowed by the Java Sea. According to one Jakartan relative I spoke with, floods have come to feel like “an annual event to us,” wreaking the most havoc from January to March — the monsoon season. In 2020, a new year’s day storm produced a flood that claimed the lives of 66 people and left a further 36,000 displaced.

Another Indonesian man I spoke with recalled floods damaging furniture and electronic devices in his sister’s Jakarta home. “Now whenever a flood is threatening, they raise the items off the floor and hang them from the ceiling.”

There are two main forces pushing Jakarta underwater. Both are man-made; both could be reversible. First, the majority of Jakartans rely on the extraction of groundwater for their daily water consumption. This is because the city’s water pipe infrastructure is outdated and can only sustain 40 per cent of residents’ demand. Hence, rather than looking to unreliable public agencies to supply tap water, most people resort to private ground pumps or wells, which extract water from deposits found dozens of metres below ground. Groundwater extraction is a common form of water subsistence — one-third of Canadians get water to their taps through this method. But when millions depend on groundwater extraction each and every day — a process which often goes unregulated in Indonesia — the earth under the city starts to deflate, and in turn Jakarta starts to sink.

According to hydrologists, Indonesian officials must commit to a full revamp of the city’s water supply infrastructure, constructing a new system that funnels rain and river water into man-made reservoirs connected to the city’s water pipes. In the late 1960s, groundwater extraction in Tokyo created a similar sinking crisis. Fortunately, the Tokyo Metropolitan Government implemented a combination of regulatory laws and infrastructure reform, stopping the sinking by the turn of the century.

Yet, a more daunting problem looms over Jakarta and the rest of the world. Carbon emissions from the burning of fossil fuels continue to intensify the planet’s greenhouse effect. The result — global warming — induces thermal expansion of the water that makes up Earth’s oceans and the melting of the ice that makes up Earth’s poles. For this reason, sea levels have been rising for over a century across the world. But especially in developing areas like Jakarta, marked by outdated infrastructure and less capital to invest in costly alternatives, rising sea levels blend with pre-existing problems like excessive groundwater extraction, and the result is that the intensity of the climate crisis is felt at a two-fold rate.

Local groundwater extraction is behind Jakarta’s sinking and must be slowed, but global warming is where the long-term humanitarian crises are contained. Indonesian President Joko Widodo invested in the construction of a giant seawall and 17 artificial islands in the Jakarta Bay to protect the city from storms and flooding as it continues to sink. Yet, rising sea levels mean that the Java Sea is slowly climbing on these blockades, rendering them increasingly ineffective at preventing disaster. Asking not to be referenced by name, the same man who told me about his sister’s flooding problems said, “Yes, right now a sea wall stops the seawater from inundating the city, [but] seawater could breach the wall at any time.” He believes that underfunding often results in half-baked infrastructural solutions to many of Indonesia’s safety concerns; a critique authorities do not always react well to when you remind them.

President Widodo’s 2019 decision to move the nation’s capital from Jakarta to the neighbouring island of Borneo foreshadows the long-term displacement, health, and economic predicaments that fester where underdevelopment meets climate change.

In 2007, a particularly strong storm left half of Jakarta flooded; 80 people lost their lives, 600,000 lost their homes, and taxpayers lost over $500 million USD to the recovery, taking away from development projects. Despite this devastation, the people I spoke with had no special memory of this incident; “many floods occur every year in Jakarta, it is numbing.”

In 30 years, when North Jakarta is submerged, what will have happened to the millions who live and work there today? “They will have to move to higher ground,” said one relative, plainly. An increased intensity of meteorological events puts mass displacement in the forecast. The World Bank estimates that by 2050, Southeast Asia, Sub-Saharan Africa, and Latin America will generate 143 million climate migrants. While some will seek refuge internationally, most displacement will happen internally because, as UN researcher Arno Tanner highlights, “people whose livelihoods are most sensitive to environmental changes also tend to be those who do not have the means to move very far.” Ultimately then, the heaviest burden will be borne by the same countries experiencing the worst of the climate crisis in the first place.

The melting of polar ice is causing Jakarta to drown, but other developing nations are experiencing the polar opposite effect: drought. In Botswana, for instance, global warming has reduced total rainfall, leading to a drop in agricultural production and increasing food insecurity. In recent years, delegates at the UN General Assembly have warned that climate change is inhibiting countries from attaining their Sustainable Development Goals. The permanent flooding of North Jakarta would compromise $220 billion in assets, and would hinder productivity and economic growth, according to Indonesia’s Ministry of Economic Affairs. Ultimately, the burning of fossil fuels is one of the global economy’s greatest market failures.

Today, a rather topical concern is also raised by climbing ocean levels: the spread of disease. The World Health Organization warns that when rapid flooding uproots sewage systems and carries their contents through the streets, there is a heightened risk of infectious disease spread. “Six common diseases to watch out for during floods,” read the front page of the Jakarta Post at the beginning of 2020.

As predicted, climate change is beginning to disproportionately impact the corners of the globe least equipped to face and finance its consequences. The drowning of Jakarta is ‘exhibit A’ to this process. And yet, the countries that bear the most responsibility for the creation of this crisis, in per capita terms, will likely bear the least of the burden. The carbon footprint of the average Canadian is about seven times greater than the average Jakartan’s, and yet some models predict that Canada could be one of few nations to actually benefit from global warming (as cultivable land and natural resource deposits thaw). Nonetheless, in a globalized world, mass displacement, economic stagnation, and the spread of disease — as we have seen first-hand — are threats which all nations have a shared interest in preventing. The worst of the climate crisis can be avoided if countries legitimately commit to their ‘long-term low greenhouse gas emission development strategies’ mandated by the 2016 Paris Agreement.

Featured Image: “Lending a hand when it counts: helping our partners during the Jakarta floods” by East Asia & Pacific on the rise, licensed under CC BY-NC-ND 2.0.