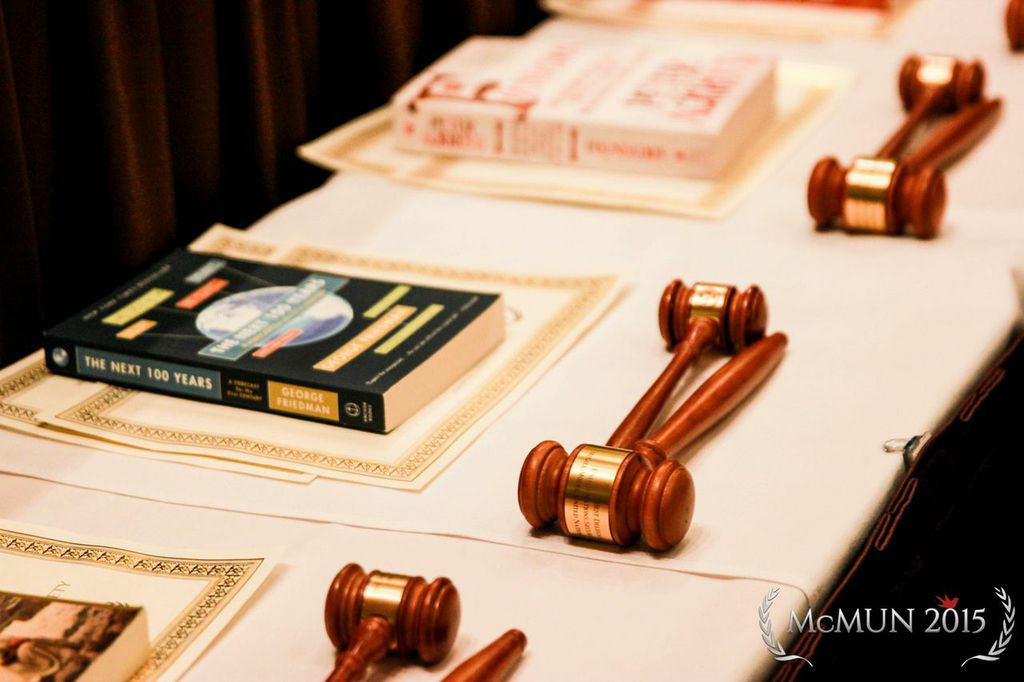 “I think it’s fair to say that we had a good time this weekend, whether it was debating in a committee […] or whether it was dancing at McParté. I think the best way to sum up this weekend is by saying three cheers to McGill,” said Ameya Pendse, President of the International Relations Students Association of McGill, on January 25 at the closing ceremony of the McMUN 2015 conference, uplifting the near 1500 delegates and 650 McMUN staff from a sleepless yet eventful night at McParté.

After introducing the delegates and staff to a short film documenting their four-day experience at the conference, Pendse welcomed the thirteen members of this year’s McMUN Secretariat to the front.

McMUN Secretary General Ryan Mitton took the stand, taking the time to acknowledge and commend the McMUN staff and notably his Secretariat colleagues for their passion and dedication in organizing this conference over the course of ten months.

He quoted the opening ceremony’s keynote speaker, Mr.Payam Akhavan, a former UN prosecutor and a current professor in the Faculty of Law at McGill University, stating that “there is a human side to international relations as there is a human side to Model UN. In the same fashion, your Secretariat is also human,” he said. “And in my eyes, they are some of the greatest humans I have had the pleasure of working with.”

McMUN’s Undersecretary-General of Committee Affairs Brendan Sheehan thanked the daises for their hard work over the past ten months in setting-up their respective committees and then delved into the most anticipated part of the ceremony: the awards.

The handing of awards was followed by the Director of Public Relations Emily De Wolfe’s update on the donations raised for McMUN 2015’s chosen charity, Atsikana Pa Ulendo (APU) Malawi Girls on the Move, a non-profit organization aimed at providing a full scholarship to girls attending school in Malawi. De Wolfe announced that McMUN had raised 1,253 dollars in support of the charity.

In closing, Mitton expressed how speechless he felt that the McMUN 2015 conference had reached its end. “Thank you guys for everything, and I know I will see you all at some point soon, because this is a tight-knit community and we’re all going somewhere. So let’s make that somewhere a good place. It is now my pleasure to gather to a close the twenty-sixth edition of the McGill Model United Nations assembly,” Mitton said. And with a last swing of the gavel, the McMUN 2015 conference was over even before you could say “Georgetown.”