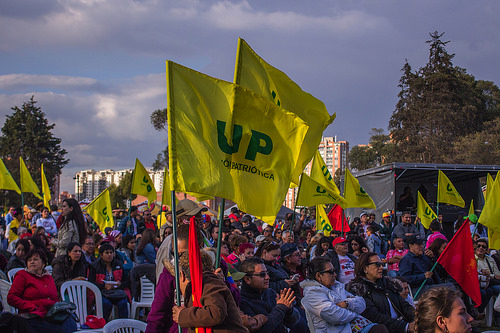 In the 1980s, the left-winged political party Unión Patriótica (UP) emerged in Colombia. It was announced to the public after the culmination of peace negotiations between President Belisario Betancur’s Government and the insurgency guerrilla Revolutionary Armed Forces of Colombia (FARC). In the following years, members of the UP would be assassinated one by one in what appears to be a systematic extermination by still unknown forces. The history surrounding the formation of the UP and the politicide that ensued shares many similarities with the current political and social climate in Colombia. Because of these uncanny similarities between past and present, the events that led to the assassinations of the UP party members should be remembered today.

The FARC emerged in the mid-1960s after government attacks on peasant zones in Marquetalia, Riochiquito, El Pato and Guayabero. In 1958, a few years before these attacks, the Liberal and Conservative Parties had just agreed to take turns governing Colombia through what was called the Frente Nacional (National Front), excluding any other political party from participating. Some of the sectors in the country that purportedly did not support the Frente National were peasant zones that were called by their inhabitants ” self-defense zones.” These zones were referred to as “independent republics” in the mid-1960s by then-President Guillermo León Valencia, who claimed they were led by an ex-liberal guerrilla member known as Manuel Marulanda Vélez. It is believed that Marulanda was a liberal dissident who did not agree with the National Front. Following alleged military attacks on the peasant zones, Marulanda became one of the founders of the FARC, a left-winged insurgency guerrilla that raised itself in arms against the Colombian government.

The 1980s negotiations between the government, presided over by the conservative Belisario Betancur, and the FARC took place after 18 years of war in which no side was able to militarily defeat the other. These negotiations culminated in La Uribe in 1984 and the Union Patriótica Party then emerged from these negotiations in March of 1985. The UP’s goal was to execute the “social, economic and political transformations necessary for the consolidation of a peace with social justice.” Furthermore, through the formation of the UP, the Government sought to allow FARC members to fully incorporate themselves into civil life. The Colombian Communist Party endorsed the UP, and so did some streams of Colombia’s traditional political parties. It is important to note that the UP was not constituted exclusively by ex-FARC combatants who wanted to transition to civil life. Unions, student groups, artists and intellectuals, civic organizations, peasants, indigenous groups, women’s organizations and other popular organizations, many of which had never raised themselves in arms against the state, also joined the promising new Party.

The political context surrounding the formation of the UP is eerily similar to the political context surrounding the recent peace negotiations between current Colombian President Juan Manuel Santos Calderón and the FARC. When Santos announced these negotiations to the public in 2012, he did not receive the support of one of his greatest allies, former Colombian President Alvaro Uribe Vélez (2002-2010). Indeed, Uribe, alongside some right-winged sectors in the country, rejected Santos’ acknowledgment of the existence of a “political armed conflict” and instead claimed that the FARC was a “terrorist organization” that threatened both national security and “traditional values.” Similarly, in the 1980s, Betancur’s own party did not support his decision to start negotiations with the FARC and the establishment refused to give the FARC political recognition. Indeed, sectors in the country made up of businessmen, landowners and some members of the Catholic Church opposed the Commission of Peace endorsed by the Betancur negotiations at the time. They saw this Commission as a threat to more conservative-oriented values and denounced the presence of communists in it. Despite these opponents, a truce was reached between the government and the FARC and many sectors in the country welcomed the creation of the UP.

Nevertheless, most members of the UP were assassinated between 1985 and 1997 in what appeared to be a systematic plan called “Baile Rojo” or “Red Dance.” Amidst the ongoing extermination of its members, the UP Party decided between the 20th and the 22nd of February of 1987 to take distance from the FARC and claimed that, even if the truce between the FARC and the army ended up being breached, the UP would not dissolve itself and would continue aspiring for political participation. Yet UP Presidential candidate Jaime Pardo Leal was murdered on October 11, 1987, and the Party’s next candidate, Bernardo Jaramillo Ossa, who was apparently the frontrunner to win according to polls of the time, was assassinated on March 22, 1990. The definitive breach of the truce between the Colombian Army and the FARC took place in 1990, paving the way to an intensification of the internal armed conflict, the perpetuation of crimes against humanity and the continuation of yet another cycle of bloodshed, dehumanization, and retribution.

There were at least 1,598 UP victims according to the book “Unión Patriótica. Expedientes contra el olvido.” or “Patriotic Union. Records Against Forgetfulness.” by the journalist Roberto Romero Ospina. Yet other sources mention up to 5,200 UP victims. Who were the perpetrators? Were the assassinations systematic? If so, why did these mysterious forces see the need to eliminate this left-winged party from the political arena? Right now, there is nearly complete impunity for the still unknown perpetrators of this politicide. May it not be forgotten by present Colombians, for a history forgotten tends to repeat itself.