Climate solutions are economically feasible but Canada is lagging behind. 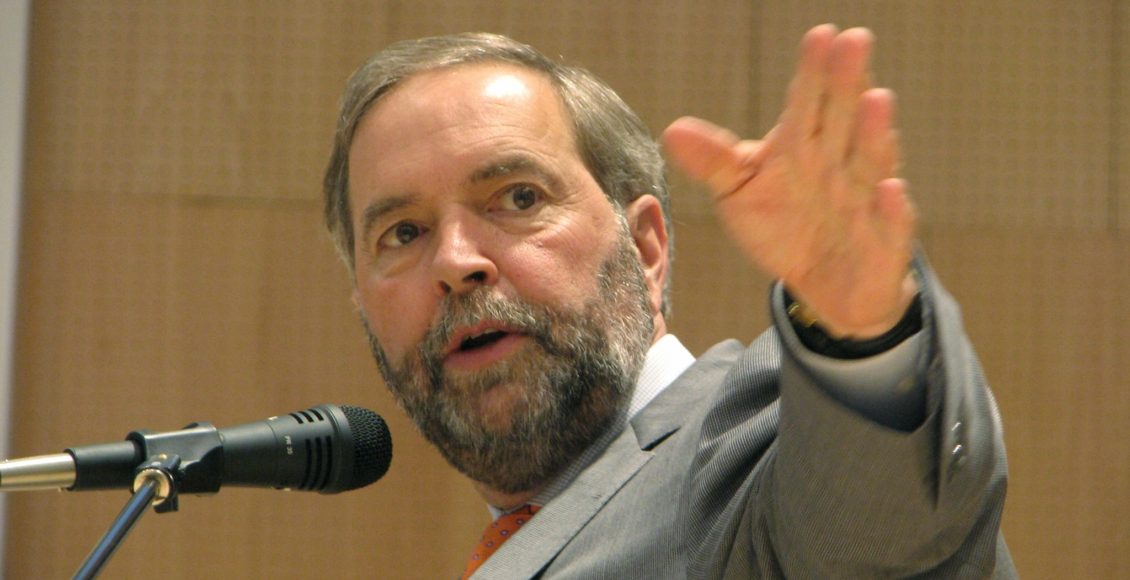 “When what you’re doing doesn’t work, do something else.”

Those are the words of Thomas Mulcair, former leader of Canada’s New Democratic Party and longtime advocate for climate action in government. It has become abundantly clear that Canada is failing on its climate goals from Paris Agreements to energy investments with real consequences for citizens: just recently experts reported that Canada is warming at double the global average. And yet the federal government seems unable to divorce itself from costly and harmful ways of doing business, even as alternatives become available. Mulcair, who oversaw the development of Quebec’s Sustainable Development Plan as Minister of the Environment in 2005, spoke at McGill’s 2019 Mallory Lecture on the government-climate impasse. Later I spoke to Mr. Mulcair about shortcomings in environmental policy and the steps ahead to achieve a green and prosperous Canada.

Perhaps the largest challenge of tackling climate change is getting everybody on the same page. While the current government and the majority of Canadians agree that climate change is an issue, there are still many that don’t recognize it as a priority. Furthermore, a missing sense of urgency impedes fundamental radical action. The conversation is stilted by scientific procedure, which prevents ecologists and meteorologists from giving definitive explanations about the role of changing weather patterns in forest fires and disease outbreaks. Uncertainty is a necessary part of discovery, but leaving ambiguity allows other narratives to creep in.

“We have to stop the illusion that we can export our pollution.”

Canadians like to think of themselves as environmentally-friendly citizens. After all, most of Canada is still wilderness. But even putting aside our absurdly high per capita emissions, actions taken in Canada are responsible for emissions all around the world. Take our natural gas production: supply of natural gas far exceeds domestic demand, inspiring plans to liquify it to ship abroad. Under this proposal, natural gas would not be burned within Canada- and therefore would not be accounted for in our carbon emission budget.

Unfortunately, greenhouse gas emissions contribute to climate change wherever they are produced. That’s why Mr. Mulcair recommends adopting a closed-system approach, looking not only at our carbon outputs but also those of everyone we interact with. Where goods can be produced with lower emissions, they should be, suggests Mulcair, conceiving a system of climate-friendly comparative advantage. Internalizing environmental costs, as the infamous carbon tax does, further encourages producers to innovate with greener technology.

“Start with obligation of result. Start by defining parameters of greenhouse gases and work backwards from there.”

When building public infrastructure, Mulcair envisions policies that prioritize long term effects on the environment and society. That was the thinking behind the 2005 Quebec Sustainable Development Plan, which commits the government and government-owned enterprises to sustainable development strategies. Hydro Quebec, for instance, is required to contribute to the objectives of the sustainable development strategy when outlining their own action plans, including advancing transit electrification. Quebec’s plan asserts that living in a healthy environment is a human right, setting the conditions for incorporating environmental protection and social responsibility into everyday practice. Legally, with this provision, citizens could challenge projects that threaten biodiversity or ecosystems.

In 2008, the Federal government passed the Federal Sustainable Development Act to create a legal framework for setting environmental strategies and goals. However, these are enacted in a piecemeal fashion by individual departments and don’t apply to broader government decision making. The burden of proof of whether an action will be harmful to the environment in the long run still falls on non-governmental actors. Looking at everything through the lens of sustainable development, Mr. Mulcair says, would change how environmental protection is evaluated. In other words, it would change the goals of progress. Formalizing environmental commitments signals to citizens and corporations that Canada is taking sustainability seriously. The federal government has yet to add ‘a healthy environment’ to the charter of rights, allowing the appetites of industry to go unchallenged in the court of law.

Holding an obligation of result protects long term sustainability, but it also ensures the economic viability of infrastructure projects. Canada’s economy has always leaned heavily on natural resources, but continuing to invest in conventional projects may be as damaging to incomes as it is to the landscape. On the topic of the Trans Mountain pipeline expansion, Mr. Mulcair suggests that the idea of selling bitumen to China is nothing more than an idea. “The pipeline carries a lot of bitumen right now, and not one ounce of it is shipped to China, it is all sold to the United States.” As much as oil worker livelihoods are suffering, investing in risky projects that may or may not produce results is just not good enough.

“Canada is still subsidizing the oil industry, whether directly or indirectly, with tax credits, or tax programs… instead of making it less inviting to produce [goods that emit greenhouse gases], we’re doing just the opposite.”

In 2009, Canada made a commitment to phase out subsidies to fossil fuel industries, a promise reinforced by Prime Minister Trudeau when his Liberal government took office. Financially protecting billion-dollar businesses is an inefficient use of government resources and one that distorts the market to the advantage of greenhouse gas emitters.

Yet, in 2019, fossil fuel subsidies are still alive and well in Canada. For example, funds are given to the Oil and Gas Industry to develop cleaner techniques, but there is little evidence that this has had any concrete effects beyond shouldering a cost that should be borne by producers. Other fiscal tools aim to reduce the costs of exploration and drilling by offering tax breaks and reductions in royalties. Regardless of what support other economic sectors enjoy, facilitating the continuation of a socially unfavourable industry out of the public’s pocketbook directly undermines Canada’s climate goals.

Under the current Government, a new $2 billion subsidy is being created on behalf of the Trans Mountain pipeline to reduce the costs of shipping oil at the expense of tax-payers. The pipeline, purchased by the Federal government for $4.5 billion dollars in 2018, is not slated to recover even the costs of interest on the purchase over the next five years due to favourable shipping tolls. Pipelines earn money by charging fossil fuel companies for use, but the current agreement Trans Mountain has proposed sets rates as if Ottawa had paid much less. As a private company, Trans Mountain would not be able to operate this way; by artificially sustaining a deteriorating industry the federal government is interfering with the economic forces turning the wheels of progress.

This revelation need not be entirely bleak. The volume of support currently allocated to fossils fuels represents potential, not only to expose the true cost of petroleum products but to invest in projects that can give rise to green innovation. With the full range of fiscal policies and tax levers that the federal government has at its disposal, pivoting to encourage environmentally responsible infrastructure holds a great deal of promise.

“Once you impose the obligation of result, the efficiency and the innovation will follow.”

In 2018 Paul Romer won the Sveriges Riksbank Prize in Economic Sciences for his work in understanding the role of human ingenuity in spurring sustainable growth. According to Romer, the means and purpose to which technology is created are entirely under our control, guided by policy and focused efforts. For climate change mitigation, the implications are encouraging. Curbing greenhouse gases doesn’t need to be costly if government policy rewards green innovation and supports environmental education.

We have already seen the results with solar panels: over the last 10 years, costs have fallen over 60 percent per MWh and are now less than energy from coal. For Mr. Mulcair, setting price signals for financial institutions to pursue green causes will reverberate throughout the economy, but the public must be receptive. In other words, governments have the ability to promote accessible infrastructure and citizens must choose how and when to use it. This is old news for electric car owners, who have taken advantage of federal and provincial rebates to increase the share of electric cars in Canada to over 8 percent for new passenger cars. While most electric vehicles are concentrated in cities powered by hydropower, the trend marks a willingness to participate in cleaner transportation as alternatives become affordable.

“The result has to be radical.”

Carbon taxes, electric vehicles, environmental rights: Mr. Mulcair envisions a future that must undergo some big changes to escape the most devastating effects of climate change. The shift, as he sees it, is generational. “Young people marching in the streets and going on strike, that’s the beginning of something… because they’re the ones who are going to have to live with it”. Indeed, student protests led by climate activist Greta Thunberg took place in over 100 countries in March calling for action on climate change. In the coming years, action at the polls will test the strength of this conviction—in what Muclair hopes will be a non-partisan movement. In the meantime, Mr. Mulcair emphasizes that we have the tools at our disposal, if only we can find the will to use them.

Mr. Mulcair is currently the chairman of the Quebec-France association Jour de la Terre, an organization dedicated to helping people and corporations live lighter on the planet.