Craft Beer at a Cost: Gentrification in Small Town BC 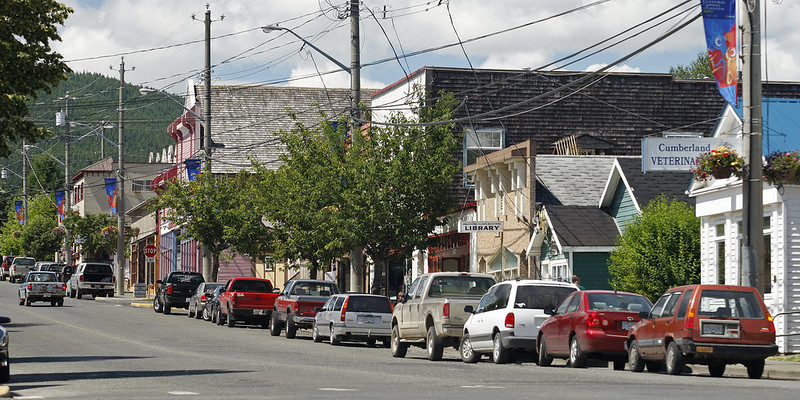 Since I was born, I referred to my home town of Cumberland as an exit town: somewhere you only really see when you pull off the highway for gas. Today, it is a destination in and of itself. The rapid increase in popularity brought about many positive developments in the community, including growth in small businesses and tourism. Still, this growth comes with negative externalities like unaffordable housing and inaccessibility for lower-income residents. In 1999, my parents bought a fixer-upper in the centre of town. They were career tree planters with an infant daughter and another on the way, and Cumberland allowed them to establish roots in a place they could afford. Currently, Cumberland lacks a comprehensive grocery store but is home to a brewery and a store that exclusively sells paddle boarding clothes and accessories. If my parents had tried to move to Cumberland today, homeownership would be little more than a distant aspiration.

A Douglas Magazine Article published in 2019 describes the Cumberland lifestyle at its best: “It’s late afternoon and mud-splattered mountain bikers are rolling up to Cumberland Brewing Company for a post-ride pint and food.” The piece goes on to credit the town’s growth to “Vancouverites, and other real-estate refugees [who] are cashing out and arriving with pockets full of equity and aspirations of small-town” living. The idyllic small town that seduces many new arrivals is not a natural phenomenon, and the unique character of these towns is a product of their history. Cumberland was once a bustling mining town with one of the largest Chinatowns in the province and was historically a haven for the poor and the working class. Notably, Cumberland was home to Albert “Ginger” Goodwin, a British immigrant and vocal union activist who was murdered in 1918 by a police officer.  After his murder, union activists in BC organized a one-day general strike in protest — Canada’s first-ever general strike. This history, followed by an influx of young hippies in the mid-’70s, created the unique atmosphere currently being capitalized on and whittled away.

For wealthy transplants, small towns seem to have it all: low crime, community engagement, relative affordability, and an ineffable “cool.” These urbanites are motivated by different things. For some of them, it comes down to boredom or exhaustion coupled with the desire for a slower pace of life. For others, it’s a matter of affordability. As Vancouver becomes increasingly gentrified, young professionals find it challenging to carve out a comfortable life for themselves and their growing families.

The first group — the bored — don’t seek out small towns so much as they buy into them: they buy into the mythos of cool small towns where you can ski and surf on the same day, and then buy T-Shirts that remind everyone around them that they get it. Ironically, these individuals consistently misinterpret exactly what it is. Many transplants fail to recognize that the je ne sais quoi drawing hip young urbanites to small-town BC is a culture born at the intersection of the working class and the artist, both of whom are increasingly rare in these places.

The newfound obsession with cool has led to self-aggrandizing media and the adoption of the word “legendary” in Cumberland’s branding. However, BC’s small communities have always been legendary to a specific subset of people, including union activists, tree-planters, and around 40,000 American draft dodgers. During the Vietnam war, Nelson BC was a haven for draft dodgers who are generally credited with creating the atmosphere that is so sought after today. In the late 70s, the sawmill and university closed down, forcing the town to reinvent itself through tourism. Evidently, the tourism strategy worked. Nelson has recently become a sought-after destination for “urban refugees“: young people who are priced out by Vancouver’s ever more inaccessible cost of living. Still, others were simply “willing to exchange lucrative salaries for jobs that let them go mountain biking in the afternoon.” Like Cumberland, Nelson is the perfect playground for those who have the means and opportunity to regularly and passionately pursue activities like mountain biking. Though individuals should not be demonized for pursuing their passions or hobbies, doing so to the point of relocation illustrates the immense privilege encroaching on towns like Cumberland and Nelson.

These towns are bursting with a specific kind of charm, a sort of postcard idealism that urbanites are increasingly seeking. Indeed, historic homes and storefronts, Sunday markets, and serene natural settings engender nostalgia for a time gone by — a time when the world was not so big and dangerous. This charm has become a curse for lower-income residents, as they are consistently priced out of the housing market in favour of wealthy transplants, and the romantic facade lacks the same allure. Nelson is home to a 17-bed homeless shelter, which has been consistently full for the last few years due to the growing cost of living and population. In fact, in 2019, Nelson had the highest homelessness rate in the province of British Columbia, wherein 7.9 out of every 100,000 residents are homeless, whereas, in Vancouver, that number is 0.9. The reasons behind BC’s homelessness epidemic are complicated, and I won’t dive into them here. Nevertheless, it’s safe to say that a large contributing factor is rapid population growth in the province. In 2019, BC’s population grew by 70,000, and the vacancy rate was reduced to 1.3 per cent. This trend isn’t at all a new phenomenon: between 1990 and 2016, the average rent for a one-bedroom apartment in BC increased by 24 per cent while social assistance dropped substantially. All the while, BC has retained the highest rate of income inequality in Canada.

Historically, new arrivals from out of province and out of Canada targeted Vancouver. More recently, however, newcomers often skip Vancouver in favour of small towns, including those close to one of BC’s two major urban centres and those becoming destinations of their own. Cumberland grew by 36.3 per cent between 2006 and 2016, almost triple the provincial rate of 12.5 per cent. In that same period, Cumberland’s indigenous population dropped by more than half.

Two decades ago, “you could barely give away a Cumberland fixer-upper,” and Comox Valley real estate agents even refused to list properties in the town. Today, the average single-family home in Cumberland costs around $550,000. The number of households earning more than $100,000 annually grew by 268 per cent between 2006 and 2016, while those earning less than $20,000 fell slightly. Rent is considered unaffordable when it requires more than 30 per cent of the individual’s monthly income. By this standard, 59.6 per cent of Cumberland renters were cost-burdened in 2016. Growth is both essential and inevitable, and as the population expands and people push to the further reaches of the world to find their niche or community, that growth can be detrimental to the small towns that get “discovered.” Gentrification begets superficial improvements for these towns’ wealthier residents while forcing others onto the streets or into other, less developed areas. This seemingly endless cycle of growth and devastation creates a negative relationship between the increasingly segregated socio-economic groups in BC. It is not sustainable for anyone but those who decide that inaccessibility is the necessary cost of comfort, lifestyle, and craft beer.

Featured Image: Dunsmuir Avenue Cumberland BC. “Cumberland,” by Province of British Columbia, is licensed under CC by 2.0.