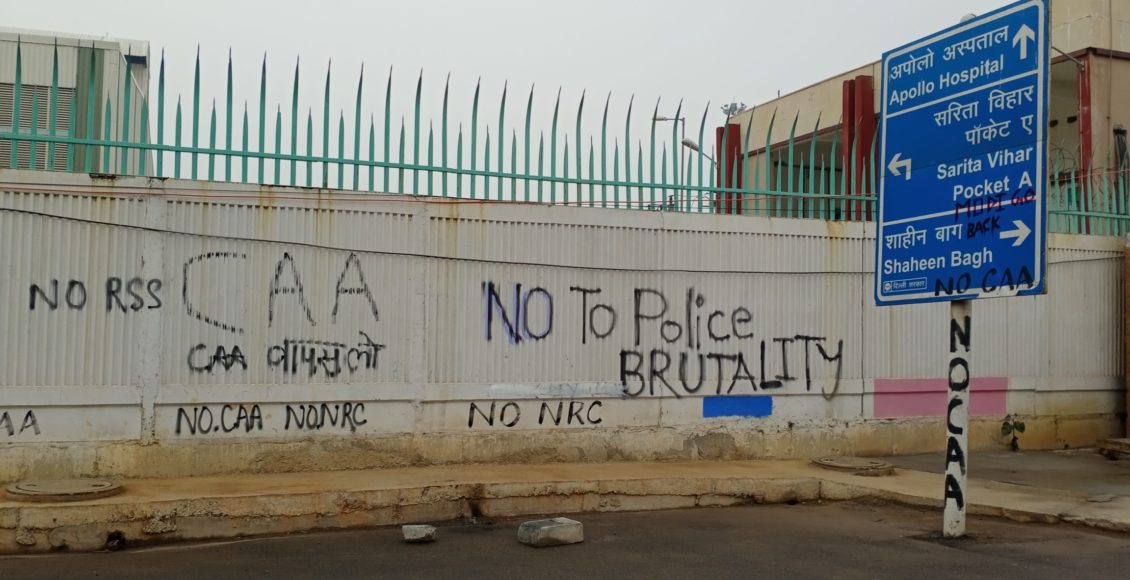 For the past two months, protests have raged across India since the Bharatiya Janata Party-dominated Lok Sabha enacted the Citizenship Amendment Act (CAA) into law on December 11th. The act, passed under the leadership of Prime Minister Narendra Modi, provides a pathway for persecuted religious minorities from neighbouring countries, such as Afghanistan, Bangladesh, and Pakistan, to obtain Indian citizenship. While the act includes most major religions in South Asia, benefiting Hindu, Sikh, Jain, Buddhist, Christian, and Parsi refugees, Muslims are notably absent. The act fundamentally changes the secular basis of Indian citizenship, which is enshrined in Article 5 of the Indian Constitution; when the Indian Constitution came into effect in 1950, all of the nation’s residents, regardless of religion, were granted citizenship.

The CAA has been perceived by Muslim Indians⁠—who make up 15 per cent of the nation’s population⁠—as the next chapter of Prime Minister Modi’s campaign to render Muslims stateless. In November 2019, India’s Home Minister Amit Shah announced that the National Register of Citizens (NRC), an index previously exclusive to the northeastern state of Assam, will be implemented nationwide. In Assam, nearly two million people, mostly Bengali Muslims, failed to produce adequate documentation to find their names on the NRC. Those not on the NRC face the possibility of deportation as Indian authorities race to build mass detention camps to detain illegal immigrants, primarily from Bangladesh.

The contentious question of where Muslim Indians fit in the BJP’s core ideology of Hindu nationalism spilled over into nationwide protests against the CAA. Reactionary protests against the exclusion of Muslims erupted in several cities across India, including Delhi, Kolkata, and Mumbai. On December 13, major demonstrations organized by students at Jamia Millia Islamia University resulted in 50 students detained by police⁠— enforcement authorities forcibly entered the campus, cracking down on protestors with batons and tear gas. Two days later, 60 students at Aligarh Muslim University were injured during demonstrations as protestors clashed with police. Despite police bans on protests in several parts of India citing “unlawful assembly,” demonstrations against the marginalization of India’s Muslim population continue nationwide.

Although many segments of India’s population have flooded the streets in opposition to the CAA, protestors are not united in their motivations. On the other side of the spectrum, demonstrations in India’s northeastern states, especially Assam, have been motivated by fears that the CAA will encourage a wave of migration that has the potential to upset the region’s delicate demographic balance. For many Assamese, the CAA poses a threat to their political rights and culture, as the state of Assam had previously negotiated the Assam Accord in 1985, which stipulated the deportation of all “illegal” cross-border migrants arriving in Assam after March 1971.

In a tweet, Prime Minister Modi responded to protests calling for national unity, saying that India “cannot allow vested interest groups to divide us and create disturbance.” Despite what Modi may claim, however, the highly divided opposition to the act is not the work of loud, disgruntled minorities, but instead represents the latest chapter in the long struggle to define India as a nation.

In March 2019, Member of Parliament Shashi Tharoor described the May 2019 general elections as a “battle over the soul of India.” This enduring battle reached new heights when in 2014, Prime Minister Modi and the BJP decisively came to power on a platform of a unified India under Hindu nationalism. Under Modi’s leadership, Muslim Indians have increasingly become victims of communal violence, as the BJP’s rhetoric has spurred a violent vigilante campaign against those linked to beef consumption, amongst other issues. Although cow slaughter is forbidden in most parts of India, the BJP has made numerous appeals to India’s Hindu-majority population stressing the importance of cows, which has emboldened vigilante groups. Between May 2015 and December 2018, at least 280 have been injured, and 44 killed in violent incidents incited by cow-vigilante groups.

Despite the enshrinement of religious freedom and equality in the Indian Constitution, anti-Muslim violence pre-dates the rise of the BJP. One of the most notable episodes of inter-communal violence occurred in the western Indian state of Gujarat in 2002, during Modi’s time as the state’s Chief Minister. After a train fire in Gujarat killed 59 Hindu pilgrims, violent riots between Hindus and Muslims broke out, resulting in nearly over 1,000 people killed, the majority of which were Muslim.

Parallel to the enduring grievances felt by India’s Muslim population, there have been long-standing concerns of political and cultural primacy felt by indigenous tribes in India’s northeast, particularly in the state of Assam. The contentious issues surrounding Assamese cultural and linguistic identity date back to the British colonial period, during which Great Britain imposed Bangla as the state language from 1836 until 1872 due to the demands of Bangla-speaking government workers from West Bengal. Fears of Bengali domination in Assam were reignited as over 3 million people, mainly Hindu, migrated from Bangladesh (then East Pakistan) from 1948 to 1961 due to unrest. By the late 1970s, the Assam Movement emerged, which was a popular, student-led movement against illegal immigration. After demonstrations turned violent, the Indian government entered into negotiations with Assam Movement leaders, producing the Assam Accord. According to this accord, any “illegal” immigrant entering Assam after March 1971 is subject to deportation.

Despite parliament stating that the CAA will not affect existing agreements with individual states, the BJP’s long-time allies in the northeast have come out in protest against the act. With demonstrators continuing to express anger over the political, economic, and cultural implications of migrants receiving citizenship, the government has responded by imposing curfews and internet shutdowns. Falling outside the BJP’s traditional understanding of Hindu nationalism, indigenous tribes in the northeast are opposed to any migration, regardless of religion.

As the protests against the CAA escalate, these diverging viewpoints on issues of migration and citizenship cannot be dismissed as marginal, as this debate has defined, and will continue to define, deep-seated cleavages in Indian society. The widespread opposition to the act has the possibility to destabilize Prime Minister Modi’s government, despite the BJP winning a historic landslide victory in May 2019. Although analysts have remarked that the international community’s tepid response to India’s ongoing citizenship crisis has been informed by the country’s position as a potential democratic counterweight to China, the tensions polarizing the world’s largest democracy may soon become too large to ignore.