Crying Wolf on Venezuela: The False US Coup Narrative 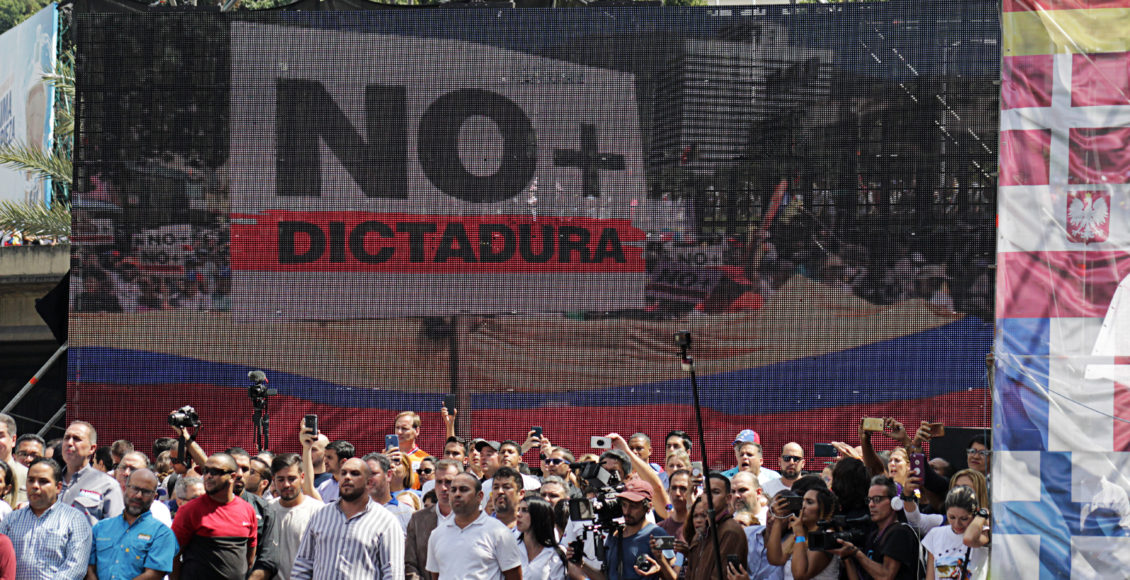 Since 2015, approximately 2.7 million people have fled Venezuela due to an economic crisis that has resulted in hyperinflation and social unrest. For years, the international community has called out President Nicolás Maduro’s regime for its attack on Venezuela’s democratic institutions, earning him the moniker of usurpador, or “usurper” in Spanish. On January 23rd, opposition leader Juan Guaidó was sworn in as interim President of Venezuela at the recommendation of the National Assembly and the Supreme Tribunal of Justice in exile, or, as it is commonly referred to in Venezuela, the Legitimate Supreme Tribunal of Justice. This announcement led many states, including the United States, to declare their support for Guaidó and to call for free and fair democratic elections.

There is little surprise that many voices on the left, including the Maduro government, are calling the current presidential crisis a “US-backed coup,” citing the long history of American intervention in Latin America. One might also find it easy to draw connections between the US’s pattern of intervention and Venezuela’s oil to conclude that what is happening is a US invasion with the goal of setting up a “puppet government”. Paradoxically enough, Hugo Chávez, Maduro’s predecessor, used the excuse—that the US wants to infringe on the will of Venezuelans for its benefit—in order to grow his power while blurring the lines of democracy. Since 2015, Maduro has used the same card to essentially strip the opposition-controlled legislative branch, the National Assembly (NA), of its powers, always blaming US sanctions and neoliberalism for the country’s poverty. By acting as gatekeepers of Bolivarian nationalism, Chávez and Maduro’s party has successfully been able to maintain a loyal base of popularity by making unfounded claims of a US coup or intervention.

There have been debates about the ethics of intervention and power and about the legality of hypothetical US military intervention, but very few articles answer the main question on the legality of Maduro’s regime: on what standing was Guaidó sworn in as interim President? The crisis in Venezuela is long, complex, and nuanced, but the answer to that specific question is simple: the Constitution says Guaidó is the interim president. The highest court that was appointed in accordance with Venezuela’s constitution has cited Articles 233, 333, and 350 in asking Guaidó to claim the presidency. Today, Guaidó stands as the highest-ranked elected official in Venezuela.

Many are just speaking about Venezuela now, but its humanitarian crisis has been going on for years, initially precipitated by the fall in oil prices in 2015, while unconstitutional usurpation of power dates to the Chávez days. As of October 2018, 41 percent of Venezuelans wanted to permanently leave the country while 75 percent disagreed with the country’s direction. While the average Venezuelan was losing 22 pounds due to food shortages, the Maduro government continuously refused foreign aid for years, leading to an increase in visits to Colombian ERs by 16 times from 2015 to 2017. Earlier last month, Maduro blocked a highway to prevent US aid, that was being brought in by Guaidó and the opposition, from arriving. Maduro additionally burned a shipment of humanitarian aid sent by the United States. In the last few years, Maduro has jailed opposition leaders, and his government has been involved in an estimated 500 extrajudicial killings since 2015.

After the crisis started devolving in 2015, Venezuela decidedly voted for the opposition, handing it two-thirds of the seats in the National Assembly, the body that oversees the election of members to the Supreme Tribunal of Justice (Tribunal Supremo de Justicia, or TSJ). Facing an incoming opposition-led legislature, Maduro illegally expanded the TSJ’s size and packed it with his allies during a lame duck session. The appointments were unqualified, did not follow the corrected legislative process, and were made far after the allotted time frame. This created a “de facto TSJ” that was in violation of the Venezuelan constitution. This Tribunal went on to call the National Assembly illegitimate and claimed the latter’s powers for itself, meaning it had the power to create as well as judge laws.

The National Assembly went on to elect its appointments to the TSJ as mandated by the Constitution. This created a de jure TSJ, eventually known as the “TSJ in exile“, which today meets overseas through video conferences. Explicitly called the Legitimate STJ by many, especially those in exile, this court continues to judge on government business and makes recommendations to the government bureaucracies as the legitimate judicial branch of the land. While not recognized by Maduro, there are parts of the government under opposition control that have recognized the Legitimate TSJ, such as the National Assembly and the former Attorney General.

In July 2018, after mounting tensions, the Legitimate TSJ convicted President Maduro to 18 years in prison. Then, on January 23rd of this year, the Legitimate STJ recommended that National Assembly President Juan Guaidó be sworn in as interim President, citing articles 233, 333, and 350 of the Venezuelan constitution. Article 233 pertains to the procedure for succession in the case of a vacancy in the presidency. In the absence of legitimate democratic presidential elections in Venezuela, Maduro’s term ended in January 2019, which created this vacancy.

Article 350 goes further, outlining how an elected government can be illegitimate: “The people of Venezuela, true to their republican tradition and their struggle for independence, peace and freedom, shall disown any regime, legislation or authority that violates democratic values, principles and guarantees or encroaches upon human rights.” As the Maduro government violated democratic principles by banning parties, encroaching on freedom of the press, and committing crimes against humanity with hundreds of extrajudicial killings, Article 350 clearly states that it is illegitimate. This illegitimacy also creates the vacancy mentioned in Article 233, which in turn states that the National Assembly President assumes the interim presidency and must call for elections within 30 days. That is what the National Assembly did, and that is why Guaidó assumed the interim presidency.

The third article invoked was Article 333: “This Constitution shall not cease to be in effect if it ceases to be observed due to acts of force or because of repeal in any manner other than as provided for herein. In such eventuality, every citizen, whether or not vested with official authority, has a duty to assist in bringing it back into actual effect.” While Article 350 explains why Maduro’s government is illegitimate, Article 333 explains why the opposition movement’s call for marches, boycotts, and resistance is the democratic and constitutional one.

Blaming the crisis on US sanctions

While many admit the US is not intervening directly in the crisis, it is often claimed that the origin of the crisis was a crash in oil prices and U.S. sanctions on Venezuela. Although the drop in the price of oil in the market certainly had a massive negative effect, bad policy played a significant role. First, the lack of diversification of Venezuela’s economy that dates back to Chávez was an enormous policy blunder that made the government dependent on the naïve assumption that oil prices would never take a hit. The Maduro regime’s decision to spend and subsidize at existing levels after the oil shock worsened inflation levels. Additionally, strict but poorly planned (and often electorally-motivated) price controls exacerbated the economic issues, leading to massive shortages as a result. Chávez cutting ties with the IMF in 2007 made a bailout more difficult. In any case, the U.S. did not impose sanctions that had serious effects on the Venezuelan economy until 2018, long after the beginning of its collapse. Sanctions predating 2018 were placed on individual government officials involved in funding Hezbollah, cocaine trafficking, or undermining human rights in Venezuela. Widespread corruption and laundering of government funds have also led to many social programs being underfunded.

Furthermore, if interference for Venezuelan oil was a top priority for the United States, it would have likely intervened at a much different time. The United States is the most energy independent it has been in 70 years; they are close to becoming a net exporter and leading producer in oil. It is more likely that we would have seen their involvement at Chávez’s death, or at other major points where the opposition reached its peak.

What is a coup, when the person rising to power has no clear intentions to keep it long-term? Guaidó was sworn in invoking articles that explicitly call for elections within 30 days. The challenges he faces through an ongoing presidential crisis and an unresolved two-year-old constitutional crisis are obviously impossible to overcome until he gets the military’s support. Yet, without verbal acknowledgement of his rightful legitimacy by other countries, the military does not feel safe making the switch. It is not imperialist intervention to create or uphold social norms in the international system, such as opposition to the unconstitutional usurpation of power; that is how international relations has functioned for decades, according to constructivist theories. Recognizing the de jure government over the de facto government could easily be the less “interventionist” action, according to many interpretations. Is Maduro’s refusal to step down the coup?

The opposition in Venezuela is far from being one united voice, with eight opposition parties sitting in the Democratic Unity Roundtable (MUD), as well as four other parties outside of it. Although his party is third in terms of representation, Juan Guaidó became the National Assembly President. As a result, two major MUD parties have repeatedly expressed discontent with the power that Guaidó’s party has, which has enabled it to have heavy control over the Assembly agenda. Partly as a result of this resentment, many of these parties have worked to keep Guaidó from being on the ballot in the case of a presidential election, which greatly undermines the “coup” narrative.

There is also disagreement in regards to amnesty for Maduro; last year, it was rumoured that First Lady Cecilia Flores had entered negotiations with the opposition on the matter. The First Lady’s nephew and former CEO of PDVSA (the state-run oil and gas company) Carlos Malpica Flores has been convicted by the US of money laundering and cocaine trafficking, and the First Family, as well as multiple senior officials, have siphoned millions of dollars in assets abroad. To many, this is an admission of guilt, yet here too, the opposition seems to be divided.

The presidential crisis in Venezuela is often characterized in terms of stark dichotomies. A left vs. right, socialist vs. imperialist narrative is made when, in reality, the situation is much more complex. First, Guaidó’s Voluntad Popular party is a member of Socialist International and supports a social democracy. The second-largest party in the National Assembly and another affiliate of Socialist International opposes privatization of the state’s oil and gas company. Finally, the largest party is a centrist party with an extremely vague platform that focuses primarily on ending corruption in the judicial system and attacks on individual freedoms.

It is obvious that the opposition is far from being the right-wing ideologues that many narratives about a US-backed coup rely on. Those who claim that the will of the people is being thwarted end up silencing the voice of many Venezuelans, whether intentionally or not. This “accidental silencing” is done by people who mean well, as they see the US’s track record in Latin America. They draw parallels between the current situation and those in which a Latin American country democratically elected a socialist government. However, the two could not be more different, as Maduro’s government is far from democratic, the US is respecting Venezuela’s Constitution, and Guaidó is definitely not a right-wing dictator nor does he crave power.

Those who refuse to understand these differences allow populism and ideology to fog the reality of the situation, turning it into an ideological one over a humanitarian one.

Editors note: The Maduro convoy burning mentioned in this article, previously perceived as fact, has since been disproved (10th March 2019)

Alexandre Monnier is a U3 student currently pursuing a degree in Political Science and Economics. He specializes in North American and Latin American Politics.