CSW 63: EU panel on “Rights of Women and Girls Victims of Trafficking: Assistance, Protection, and Support.”

We have laws - now what? 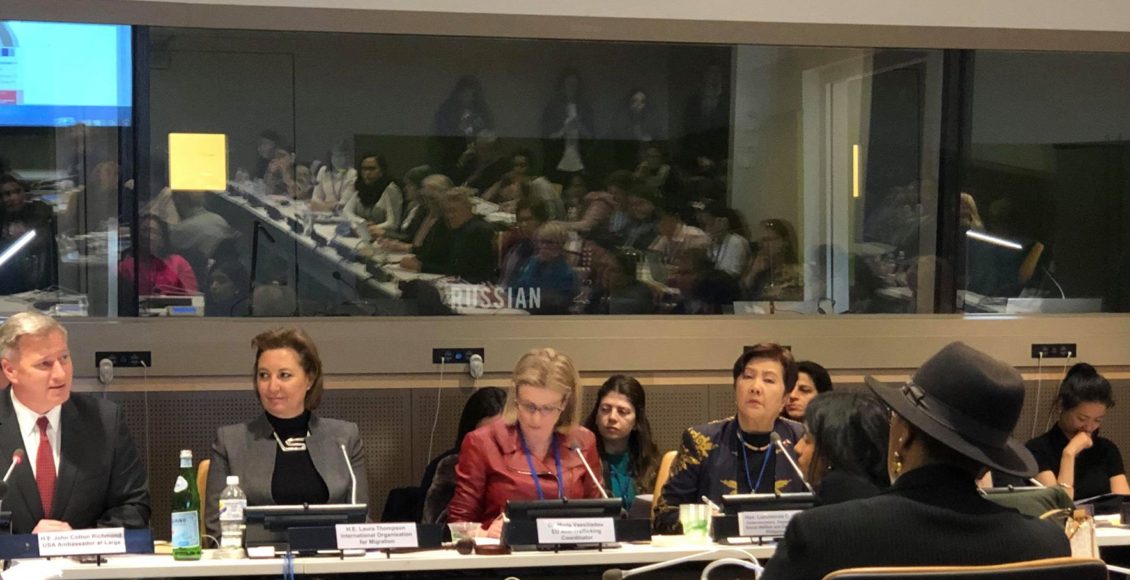 That was the first word that popped into mind while waiting outside the doors of the EU’s panel on “Rights of Women and Girls Victims of Trafficking: Assistance, Protection, and Support.” A room with approximately seventy seats had almost two hundred people lined up outside just to get in. I was able to secure myself a spot next to a representative from the UN Office on Drugs and Crime as the last few people were let in before the panel room had reached capacity.

The European Union identifies the trafficking of girls as a form of structural violence. The trafficking of women and girls is a general topic that encompasses various categories such as labor trafficking, sexual trafficking, child exploitation and involuntary domestic servitude amongst other forms of forced activities. One of the key themes was the concerted effort of the international community to rid countries of a so called “culture of impunity”, referring to cases in states whereby perpetrators of human trafficking escape their crimes unpunished by the rule of law. The chief reason for this phenomenon is the inability to translate written legislation and ratified regulation into real world application. The adoption of the protocol to “Prevent, Suppress and Punish Trafficking in Persons Especially Women and Children in 2000”, and the creation of groups such as the “Inter-Agency Coordination Group against Trafficking in Persons” have done wonders to advance laws on human trafficking, yet the implementation of these laws remains woefully underdeveloped and often times go unmonitored

This inability to implement the very same laws that states have spent years discussing and ratifying has truly struck at the heart of UN bodies as well as member states. So much so that experts on this panel seemed to be in complete consensus that for the UN and for specialized bodies that deal with human trafficking, there should be a greater focus on implementing legal frameworks, rather than adding onto them. The belief in this principle seems to be so solid that Ambassador Richmond concretely stated that if member states were to stop proposing and discussing legislation now, and devote all their attention to the implementation of approved frameworks, human trafficking would no longer be an issue in a few years’ time.

However, the reality is that implementation requires structural changes in the legal and social frameworks of member states, and actions on the national level. It was here that the Ambassador Korneliou gave some insight that I believe worth sharing about how Cyprus has approached the human trafficking problem. Since 2014, Cyprus has criminalized the use of any public service by someone who one has reasonable suspicion being involved in facilitating human trafficking. This, along with a national referral system and national action measures to better monitor effects of legislation, has done wonders for the country, and can be a model for other states to follow as well. Another important point stressed by all parties at panel was the importance of CSO’s (Civil Society Organisations) and the role they play in providing aid for women and girls at the grassroots level, and serving as a means by which governments can gain information on the effectiveness of their implementation mechanisms

Over the past decade, countless measures have been implemented to address the trafficking of women and girls, and billions have been dedicated to health services, rehabilitation programs, and to the prosecution of human traffickers. The fact is that trafficking still exists – but that should not detract from the incredible strides made by the international community. Deeply embedded issues require deeply complex solutions, and even better implementation mechanisms. It is evident that the current mechanisms are not enough, but the various programs such as ‘SPOTLIGHT’, and the ‘TIP’ Report amongst others are indicative of a worldwide collective effort to put an end to trafficking. Programs like these give me hope that survivors will get the justice and the freedom that they unequivocally deserve.