Democracy Is Not For Sale: The TTIP and European Protest Culture 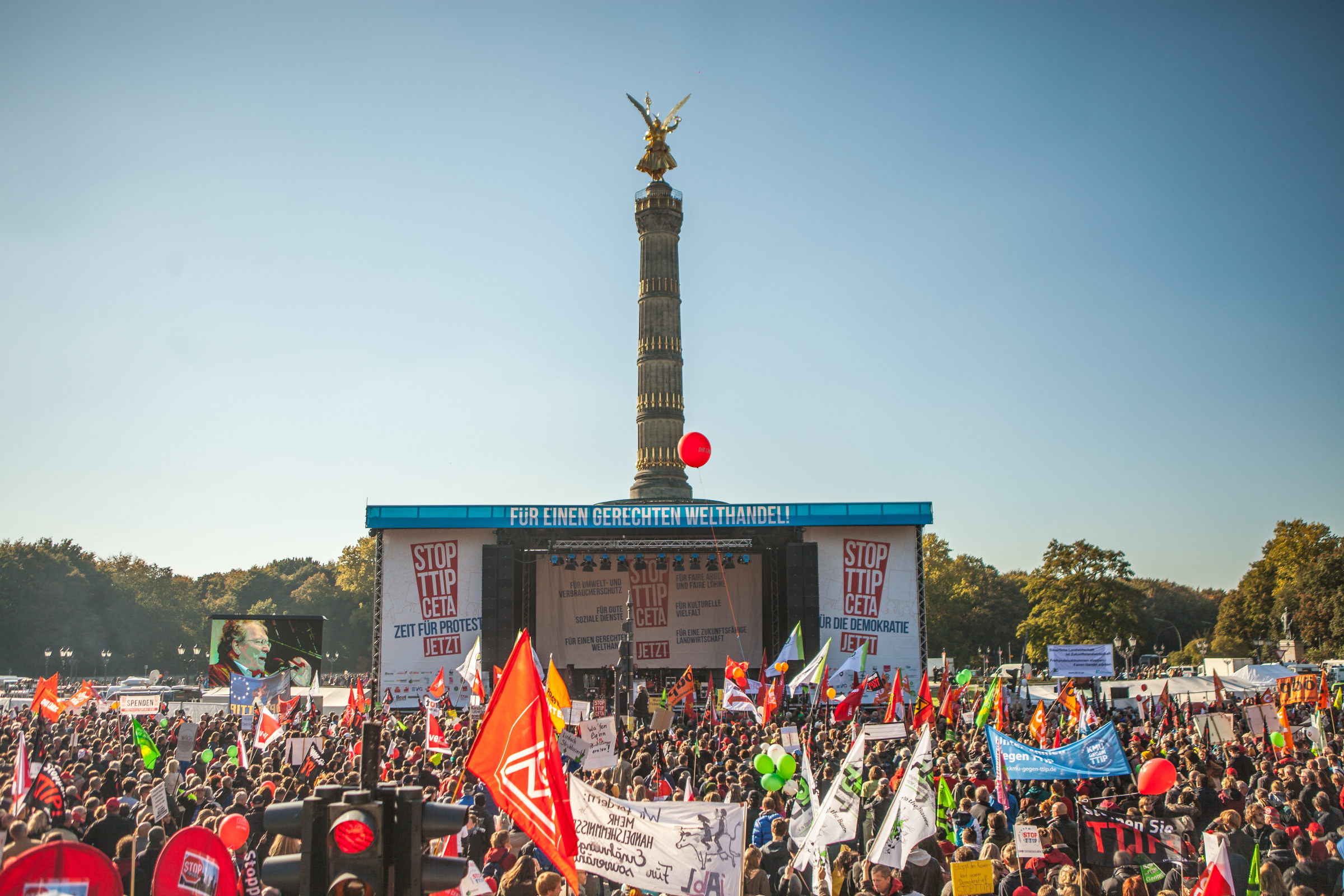 Launched in 2013, the negotiations of the Transatlantic Trade and Investment Partnership (TTIP) between the United States and the European Union entered their 15th round on 3 October 2016. In New York, the EU’s Chief TTIP Negotiator Ignacio Garcia Bercero has maintained that the TTIP would work to “shape global regulations to the benefits of consumers”, although a rising number of EU state officials have acknowledged that the continuation of negotiations is a mere “face-saving exercise” after its de facto failure.

In short, the TTIP claims it will facilitate commercial exchanges of goods and services, and enhance transatlantic investments. These two aims are to be achieved through the removal of trade barriers, including tariffs and non-tariff measures – because it focuses more on trade regulation than on tariffs, the TTIP is part of the “new generation” of trade deals. There is indeed a distinction to be made between the “old” and “new” worlds of trade deals: as identified by Pascal Lamy, “old” deals were dominated by states and aimed to administer protection from foreign competition, while “new” deals are dominated by corporate power and aim to open markets in a world of transnational production through the eradication of regulatory differences, thus administering precaution and consumers’ exposure to risk. With “new generation” trade deals such as the TTIP, differences in regulations would be resolved by applying the principles of mutual recognition, regulation harmonisation, and regulatory cooperation. Potential economic gains of the TTIP have been advertised by official negotiators – facilitated foreign market access, cost-reductions from regulatory convergence – despite economists’ consensus on the high uncertainty surrounding the actual economic benefits to be derived from the agreement. Once finalised, the agreement will need to be approved by the European Parliament and the European Council, ratified by the 28 EU Member States, and by both houses of the US Congress. However, the prospects for smooth negotiations and successful ratification seem to have dwindled over the past 3 years, as opposition to the TTIP has soared on both sides of the Atlantic.

The Origins of Anti-TTIP Protest

From 2014 to 2016, the numbers of American and German citizens supportive of the TTIP have gone down from 53% and 55% to feeble 18% and 17% respectively. The fact that the trade agreement does not find support in the state that has not only been its strongest element politically and economically, but that has historically been at the heart of the European project holds great significance regarding support for the deal in Europe at large. German civil society has been at the forefront of European collective action against the TTIP negotiations, organizing and extending the struggle beyond its borders. When considering the factors underlying European opposition to the TTIP, one mainly finds resistance to the levelling-down of labour rights, consumer laws, and environmental regulation, as well as fears of domineering corporate power.

What industrial lobbies call ‘barriers’ to trade, citizens and NGOs refer as ‘safeguards’. The TTIP’s discourse of recognition, harmonisation, and cooperation has been interpreted by many European citizens as one of deregulation. This is largely due to the fact that bridging the gap between the EU and the US approaches to risk-analysis – respectively precautionary-principle and sound-science – seems more likely to lead to a downward harmonisation of EU to US standards than an upward harmonisation of US to EU standards. Experts have confirmed EU citizens’ fears by showing that harmonisation could seriously undermine the levels of protection of public health, safety, and the environment in the EU. Documents leaked in May 2016 by Greenpeace have provided further insight into the “scope of US demands to lower or circumvent EU protections”: for example, the US is pushing for the EU’s adoption of a ‘low level presence’ initiative regarding GMOs allowing for the import of cargo containing traces of GMO strains, which is currently strictly unauthorized in the EU due to food safety and cross-pollination concerns.

Moreover, citizens fear that the TTIP will weaken the democratic decisions of sovereign states to the benefit of multinational corporations. And indeed, as has been acknowledged in a letter from Merkel’s office to Foodwatch, policy discretion in the EU and its member states could become “somewhat restricted”  by the agreement. This infringement on state’s political and legislative sovereignty would be a result of the Investor State Dispute Settlement mechanism (ISDS), enabling foreign investors to sue states before private arbitration panels. This has quite expectedly generated fears of dominance of private jurisdiction and corporate power over democracy and state sovereignty; the threat of multi-billion dollar ISDS lawsuits appearing to be an effective tool for corporate influence over governments.  Austrian Chancellor Werner Faymann voiced his citizens’ concerns when affirming that the ISDS would create “dangerous special rights for corporations.”

Over the last decades, Canada itself has had to battle against US corporations under the North American Free Trade Agreement, concerning issues such as the outlawing of carcinogenic chemicals in petrol, and has had to cede to corporate power on countless instances. Ultimately, the massive liabilities associated with ISDS would eat away state’s sovereignty, not only in the EU member-states and the US, but also in the rest of the world: if implemented, the TTIP is likely to set a golden standard for international trade.

The Change in European Protest Culture

In its risks and opportunities assessment, the EU clearly pitted the levelling down of regulation standards against unfair competition for European farmers and small businesses. This specific framing of the issue should have led to a collective-action problem, purposefully scattering the potential opponents to the agreement. However, no issue has mobilized Europeans citizens so much as the TTIP – in 2016, up to 250,000 people gathered in Berlin for the largest set of protests in Germany since 2003 manifestations against the Iraq war. Considering the de facto failure of the TTIP, it seems people power has regained a dynamism that had been faltering of late. The nature of this rising people power seems to differ across the Atlantic, though some characteristics are shared. The opposition against the TTIP crosses the traditional left-right divide in both the EU and the US, regrouping otherwise antithetical political entities under its banner. The UKIP and Front National have both co-opted the anti-TTIP argument, while Greenpeace, the citizen movement Campact, and the consumer protection group Foodwatch have been at the forefront of the Berlin-based Stop TTIP campaign. In the US, both presidential candidates have blamed the TTIP for its high potential in job losses. However, significant differences between the EU and the US opponents to TTIP reveal a change in European protest culture.

In the EU, opposition has united public health insurers, unions, and environmental and consumer groups, and has been revealingly strongest in Germany and Austria, two European states characterized by their high net export rates, strong social systems, low rates of unemployment, and high education levels. Although counterintuitive, this fact shows that European citizens at large protest not only against heightened prospects of unemployment, but also and more importantly against multinational firms’ dominance on regulatory procedures, the lowering of environmental and food security standards, and the democratic deficit of negotiations. In effect, a change in protest culture has taken place, enabled by the professionalization of NGOs allying and giving momentum to the movement. Protest is not just about “fighting against the four letters”, but rather about the preservation of “democracy and European values”. In short, European opposition has considered the externalities (be they environmental, social, or cultural) that would be generated by the trade deal, building its assessment of the deal on the larger social costs of the agreement rather than its pure economic costs. This is explains why Germany, a nation of exporters, is so suspicious of liberalising trade through “new generation” trade agreements.

In contrast, the TTIP in the US has become the target of anti-globalisation rhetoric and economic anxiety, with both presidential candidates accusing the Obama administration of promoting an agreement that would cause unemployment to soar and additional downward-pressure on wages. The anti-trade rhetoric in the US garners support mostly in post-industrial regions where jobs have suffered from NAFTA and China’s entry in the WTO.

To understand such stark contrast between the European and American oppositions to the TTIP, one must return Pascal Lamy’s distinction between the “old” and “new” worlds of trade deals. While in the US, we see an anti-TTIP response typical of “old generation” trade deals, the EU has produced a response that has identified the stakes and challenges characteristic of the “new generation” of trade deals.

What To Expect? The Salience of the EU and Democracy

New targets for anti-TTIP protesters are found in the “new generation” of trade deals. These include the Trade in Services Agreement (TiSA), a US-led service-sector agreement to be signed between 23 political units (countries or blocs), and the Comprehensive Economic and Trade Agreement (CETA), a trade agreement signed on 29 February 2016 between the EU and Canada, now awaiting ratification. CETA is similar to the TTIP in that it has raised concerns regarding its effect on regulatory standards, public services, state sovereignty, and democratic transparency. Although the CETA and the TTIP are equally opposed by European civil society (in fact, the Stop TTIP campaign is directed against both of the treaties), EU state officials are inconsistent in their appraisal of the agreements: French and German politicians who have effectively declared the end of TTIP are favourable to the CETA, while Austria, Bulgaria, Hungary, Romania and Slovenia still have reservations. Surprisingly, Prime Minister Justin Trudeau, despite his notorious left-of-centre political orientation, has dismissed the European citizens and state officials’ reluctance as “demagoguery and protectionism” – failing to grasp the innovative dynamics underlying anti-trade protest in the EU.

In light of the change in EU protest culture, it seems that prospects for future “new generation” trade agreements are rather bleak on the old Continent. This is neither anti-Americanism, nor anti-liberalism. Rather, opposition to “new generation” trade deals has revealed the salience of the EU and democratic values across class distinctions – against all odds and despite Euroscepticism and Brexit-induced cynicism.