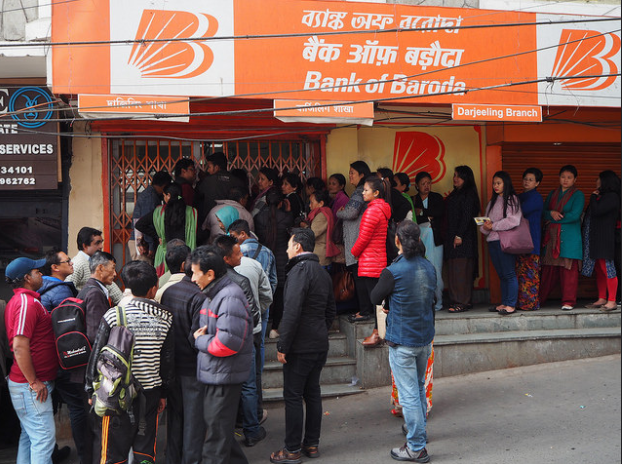 Few fiscal policies result in overnight changes to an economy, but Indian Prime Minister Narendra Modi’s demonetisation program in 2016 was a policy intended to combat corruption and tax fraud that ended up jolting the economy’s output within a couple of days. At its early days, demonetisation was met with a largely positive reception due to its theoretical merits in achieving its goals. However, long queues outside banks, severe cash shortages, and worsening macroeconomic performance have given rise to cost-benefit analyses of the policy that point in a more negative direction, leading people to criticize demonetisation’s planning and execution.

The 8th of November last year was not only the day that the demonetisation policy was announced but also the last day 500 and 1,000 rupee notes were considered legal tender. In the following days, people were expected to exchange those notes for new ₹500 and ₹2,000 notes at their respective banks. This process of giving to the banks and withdrawing legitimate notes from ATMs proved to be a logistical nightmare. Firstly, ATMs tended to run low on cash because enough notes were not printed prior to the announcement. Secondly, new notes were printed with different size dimensions to the old notes, making the new ones incompatible with some ATMs. These gross miscalculations can be blamed on the fact that people in key positions were not consulted about demonetisation or how to go about it. Finance Minister, Arun Jaitley, was notified about the plan at a very late stage, making it difficult to provide revisionary assessments in a timely manner. Furthermore, the role of the Reserve Bank of India is also clouded since governors have not clearly communicated with the media.

Two sides of the Demonetisation Coin

From a theoretical standpoint, demonetisation has been a recommendation by economists aimed at cracking down on the underground economy, where cash remains the main financial instrument. However, the impact of demonetisation depends on how well such policies are implemented and whether certain macroeconomic conditions exist that make demonetisation less of a logistical problem. The idea behind removing notes of higher denominations is that illegal or counterfeit money tends to be stored in the form of high value notes because the costs to hoard more number of lower denomination notes are very high. It is estimated that around 86% of the cash in circulation are in the form of ₹500 and ₹1,000 notes. By eliminating such notes from circulation, people with abnormally large amounts of such notes would be caught at banks when they have to exchange their money. Moreover, demonetisation essentially shifts money from informal sectors to the banking sector. With increased capital for banks, the credit and investment growth could see significant increases if funds are allocated efficiently.

By the same token, the impact of demonetisation can go awry if most of the people or organisations holding black money convert their cash into “tangible or intangible assets”. For example, funnelling black money into property, art, and jewellery are common modes of illicit money conversion. Other ways of getting rid of black money without getting caught have been reported in cases where individuals or firms paid their household workers or employees for several months in advance in old notes. As a corollary, black money gets distributed rather than being an instrument to find people engaging in corruption or tax evasion. Lastly, demonetisation has dire effects if cash is the primary mode of monetary transactions. Although 90% of transactions in India are in cash, the small percentage of wealthy people tend to use credit cards or other e-transaction methods such as PayPal or PayTM. Demonetisation would have no effect on such individuals or firms so the demographic facing the brunt of demonetisation would be the socioeconomic poor that may not have bank accounts or may get scammed into accepting black money as legitimate wages.

Economist Gita Gopinath has argued for the effectiveness of the demonetisation policy in theory but argues that the implementation of the policy was flawed, leading to higher costs incurred than expected. The much revered 7.5% growth rate has shrunk to 7% for the new fiscal quarter. For the people that had a stroke of luck with ATMs and could replace all their money with new notes found it difficult to break the ₹2,000 note denomination for change because everyone else around, including small businesses have a shortage of liquidity. Thus, consumption has fallen 1 – 1.5% and the market for perishable goods has seen a decline in purchases, with people holding back on items like fish and certain vegetables. Many small businesses that transact primarily on cash have even temporarily shut down because no one is buying “fast-moving consumer goods”. Money was scarcer still in rural India, where the time spent traveling to banks and ATMs and standing in long lines imposes further opportunity costs on farm productivity.

Although demonetisation was seen as a radical move in itself, the end goal according to Modi is a shift towards a cashless society; one in which the use of credit and debit cards, and online banking becomes prevalent. A cashless India has many benefits but, like the demonetisation program, the shift must be well thought out and executed if it is to succeed. The primary concern among relatively wealthy people is the issue of bank cybersecurity. In October, information from 3.2 million credit card accounts was stolen in India, while an increase of more than 13,000 cases of credit card hacking were reported in 2015. E-commerce may well be on the rise but issues of cybersecurity serve as a preventative force towards a cashless society.

On the other hand, harder-pressed individuals, who are much more dependent on cash, face problems like setting up bank accounts in the first place and using them on a regular basis. In rural areas, the ATM to villager ratio is alarmingly low. Furthermore, only 22% of people in villages use the internet. Thus, widespread online banking seems to be a development of the far future.

Demonetisation is a short term solution that tends to the symptoms of of the corruption issue and not its root cause. Thus, the need for correct and effective implementation is all the more important. For the time being, the short term costs to the economy seem to be out-weighing the long term benefits demonetisation was supposed to bring with regards to India’s corruption and tax evasion problem. Although cash shortages are a major shock for people dependent on cash as their primary means of exchange, they are forced to get involved in digital payment methods, achieving the objective of a cashless society. However, such a society brings on a wave of new problems like fortification of bank cybersecurity, establishing an even distribution of bank branches around such a large country, as well as greater education on e-commerce.