Denuclearization: A History of Crossed Wires 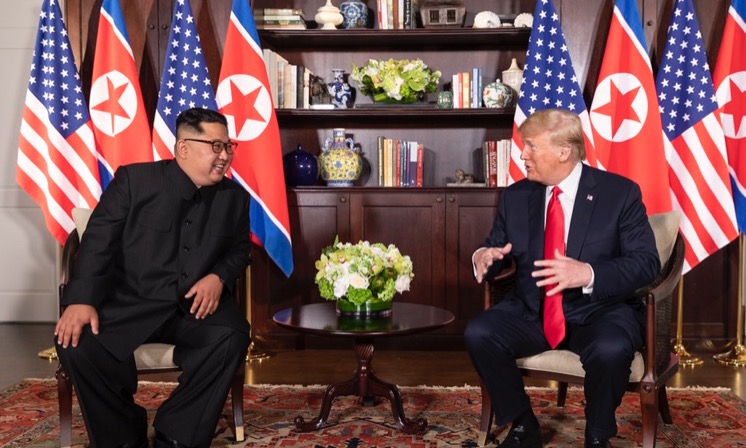 When the historic Singapore summit on June 12th brought together North Korea’s leader Kim Jong-un and President Donald Trump at a much-anticipated negotiating table, the eyes of the world didn’t know quite what to expect. For two leaders who had been engaged in a very public name-calling and threat exchange mere months before, such an optimistic turnaround hopefully meant optimistic results. Both had seemingly gotten what they wanted. Trump saw Kim willing to negotiate when faced with U.S. nuclear threats. Kim saw Trump handing him a seat at the table as an equal.

However, with only the flashy photos and a brief joint statement to show, it is hard to know how well these new developments will hold for the future. After all, the pressure campaign for the disarmament of North Korea has stretched on for decades. For this reason, examining the history of US-North Korean relations and the actions taken surrounding the denuclearization of the Korean Peninsula offers invaluable insight into potential developments as they come into global consciousness once again.

The History of “Denuclearization” on the Korean Peninsula

After years of proxy conflict on the Korean Peninsula in the midst of the Cold War, the Korean War never ended: armistice was reached in 1953, but a peace treaty was never signed. In the several decades following, North Korea began a nuclear program as a bulwark against threats to its regime, emerging from a system originally designed to harness nuclear energy.

In 1985, North Korea officially signed the Non-Proliferation Treaty (NPT), a landmark international treaty committed to preventing the spread and escalation of nuclear weapons. However, suspicious activity discovered during the final agreements in the early 1990s meant that the country failed to meet the safeguards outlined by the International Atomic Energy Agency (IAEA). When North Korea refused to permit the subsequent special inspection into these activities, the IAEA reported its noncompliance to the UN.

Amidst this turmoil of semi-committal to the NPT begins the crossed wires of denuclearization. Until this point, there had been no need to discuss possible denuclearization, for the isolationist state did not appear to have a functional nuclear program of its own. Yet, the semantics surrounding the NPT seemed to indicate that there was something to worry about. As nuclear negotiations became more common during later decades, it became clear that North Korean powers seemed to understand the word “denuclearization” as meaning the total denuclearization of the Korean Peninsula. In this sense of the word, the disarmament of the North Korean program comes only in conjunction with the total disengagement and withdrawal of the U.S. sphere of nuclear protection in South Korea.

Further international actions by the U.S. and its allies seemed to only advance this air of equal reciprocity. In 1991, President Bush announced the unilateral withdrawal of all foreign-based nuclear weapons, seemingly without provocation. Soon after, in a clear move towards mutual denuclearization, both Koreas signed a Joint Declaration of the Denuclearization of the Korean Peninsula in 1992.

Initiated by South Korea, this move seemed to be in direct support for Bush’s 1991 decision. Using much more specific and clear criteria than that of the vague declaration emerging from the recent Singapore summit, both sides agreed not to “test, manufacture, produce, receive, possess, store, deploy or use nuclear weapons” or to “possess nuclear reprocessing and uranium enrichment facilities.” However, many of these commitments were later broken by North Korea.

Later, in 1993 and 1994, the United States and the DPRK engaged in several rounds of bilateral talks in attempts to avert the imminent North Korean withdrawal from the NPT. Through the promise of increased trade and assurances against U.S. use of force, the Agreed Framework was eventually settled in June 1994. This agreement also fell through when North Korea was later discovered to still be engaged in the transfer of nuclear missile technology abroad. Finally, in 2003, Kim Jong-il officially ejected all UN inspectors and withdrew from the NPT.

However, in examining the Agreed Framework, it would seem that the U.S. took a different approach this time. Negotiating from a more one-sided perspective when it came to concessions, there was no question that North Korea was saddled with the more sizable burden. In the Agreed Framework the U.S. established another promise to “freeze” the North Korean nuclear weapons program, with only economic and technological obligations on the U.S. side. It is here that the interpretations of “denuclearization” by the two sides appear to split.  While the North Korean definition of “denuclearization” clearly entailed a mutual disarmament, this nuclear agreement – spear-headed by the Americans – did not consider a U.S. nuclear rollback at all. Instead, the tactic of using economic incentives or sanctions would continue to replace any nuclear promises by the U.S for decades.

As North Korea withdrew from the more biased approach of the Agreed Framework, further international discussions were held later in 2003 and continued into 2006. Subsequently entitled the Six Party Talks, the United States, North Korea, South Korea, Japan, China, and Russia seemed to jointly commit to working towards total peace on the Korean Peninsula. Yet, the allied goals actually appeared to be very similar to those of the Agreed Framework. Very soon, these promises inevitably met a similar fate.

Implications for the Singapore Summit

History speaks for itself: the overarching trend seems to be constant committal and little follow-through. Numerous rounds of negotiations and bilateral agreements – many containing stronger and more specific language than the Singapore agreement – have only resulted in missed promises and the advancement of the North Korean nuclear program. However, another trend seems to be the history of promised reciprocity within this timeline of negotiations.

In the aftermath of the Singapore Summit, this distinction seems more important than ever. While Kim is operating under the assumption that “denuclearization” implies a U.S. nuclear withdrawal first, Trump is certainly not. When Trump talks of denuclearization, he means only North Korean disarmament. In yet another sense, the two leaders are speaking different languages.

This does not bode very well for the future. While bilateral talks between the two countries is certainly a step in the right direction, history implicates that the agreement itself might just fail to hold up. Trump’s big concession was to give up the joint military exercises with South Korea – there was nothing written about U.S. nuclear withdrawal. However, the likelihood of North Korean disarmament seems to entirely depend on U.S. nuclear disarmament. The absence of military exercises might not be enough.

And for good reason. The fact remains that only very few countries in the world’s history have given up their nuclear weapons. A (tactless) statement from U.S. NSA Advisor John Bolton about Libya implies the fate of a dictator who did give up his nuclear weapons program. If anything, the nuclear negotiation this time around has seemed to have gotten Kim a seat at the big table. Why would anything short of his version of denuclearization be enough of an incentive for Kim to dismantle the only reason that the world is taking him seriously?