Destroying the Memory of a people: ISIS’ Cultural Genocide on Religious Minorities 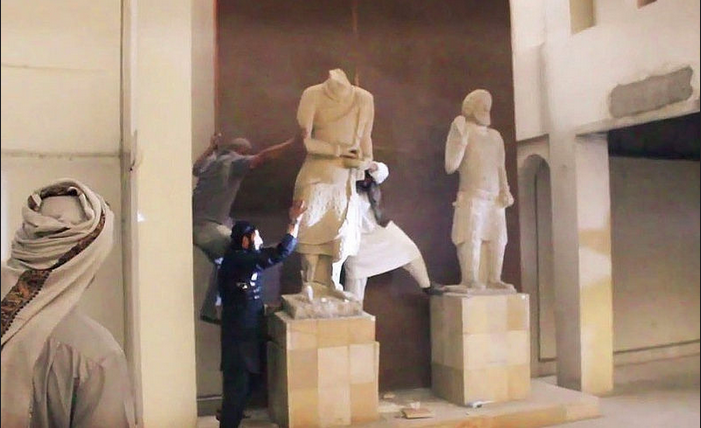 The Mosul Public Library and Museum, home to statues and artefacts dating back to the ancient Assyrian and Akkadian empires; the ancient capitals of the Assyrian empire, Nineveh and Khorsabad; the ancient Assyrian cities of Nimrud and Hatra; and most recently, the ancient Christian Mar Benham monastery and the Yazidi minaret in Sinjar. These sites and buildings, which have stood for the essence of entire minorities in the Middle East for centuries, have been laid to waste by the jihadist group ISIS and now merely exist in words.

“The relics you see behind me are idols that were worshipped other than God in the past centuries,” says an unidentified ISIS member in a video displaying ISIS militants shamelessly destroying ancient artifacts at the Mosul Museum in Iraq.[1] “The Prophet ordered us to get rid of statues and relics, and his companions did the same when they conquered countries after him,” the unidentified ISIS member continued.[2]

ISIS, however, is not motivated by idolatry in the name of Islam in its iconoclastic acts, as it claims. Its intentions are clearly genocidal, aimed at culturally erasing Assyrians, Yazidis, Christians, Shia Muslims, and other religious minorities in Iraq and Syria entirely from collective human memory.[3] What is more, among all of the powerful organizations and states in the world, solely the United Nations Educational, Scientific and Cultural Organization (UNESCO), the Islamic Educational, Scientific and Cultural Organization (ISESCO), and a handful of archaeologists and researchers to date have stood up to condemn ISIS’ deliberate destruction of these sites, cities, and artifacts as “cultural cleansing,” urging the international community to put an end to these crimes.

Defining cultural genocide
ISIS is not unique in its eradication of culturally-rich monuments and sites. In the 1970s, the Khmer Rouge regime in Cambodia set about to desecrate most Buddhist temples and statues, several mosques of the Cham Muslim minority, and all of the country’s Christian churches. In the 1990s, Serbia, together with Bosnian Serb forces, destroyed entire libraries, mosques, and other cultural and religious sites associated with Bosnian Muslims. A few years ago, the Bahmiyan Buddhas fell to Taliban bombs in Afghanistan.

These acts are not simply being committed upon mere fragments of paper, marble, and wood. These materials and the structures which they form are the traces of peoples’ lives on earth, and bearing such significance in mind, their destruction has meant the intentional cultural elimination of peoples from history.[4] The “abolition of a group’s language [and] restrictions upon its traditional practices and ways” may also constitute cultural genocide.[5] The Indian Residential School System in Canada, the last of which was closed in the late 1990s, is a prime example of such a form of cultural genocide upon First Nations peoples by the Canadian government, which consisted of “taking the Indian out of [First Nations] children.”[6]

That is not to say, however, that the destruction of books and buildings are comparable to the physical destruction of peoples, but it is worth nothing that the cultural annihilation of peoples cannot be removed from physical genocide.[7] The former almost always accompanies the latter, leading to the successful end and desired meaningless to the group’s existence.[8] The United Nations Office of the High Commissioner for Human Rights, for example, recently released a report, based on more than one hundred interviews with Yazidi survivors of brutalities perpetrated by ISIS in Iraq between June 2014 and February 2015, stating that ISIS may have committed genocide with the “intent . . . to destroy the Yazidi as a group.”[9]

Evaluating the international community’s response
Although the destruction of cultural property as a form of genocide is not considered a crime against humanity under international law at present, it was once almost criminalized as such. The initial draft of the 1948 Convention on the Prevention and Punishment of the Crime of Genocide (CPPCG) had contained “cultural genocide” as a type of genocide and had stated that the term encompasses acts such as “forced exile, the prohibition of the use of a national language, and the destruction of books and similar acts,” such as the destruction of other cultural property.[10] The term “cultural genocide” was then swiftly removed from the Convention, as its definition was seemingly unclear and its inclusion would have undermined the Convention’s aims of preventing physical or biological genocide and of holding its perpetrators accountable for the crime.[11] To this day, solely the 1954 Hague Convention prohibits attacking cultural property, unless it is of “imperative military necessity,” but it does not tie the act to intentionally annihilating a group of people.[12]

The fact that “cultural genocide” is no longer incriminating under the Convention may explain the near lack of response from the international community for ISIS’ continuous destruction of the cultural and historical heritage of religious minorities in the Middle East. However, the ongoing development of progressive constructions of the definition of genocide in international law throughout the twenty-first century thus far should have the community’s response be deemed as deplorable.[13] Some courts, as well as UNESCO’s, ISESCO’s, and a few researchers’ condonment of ISIS’ recent acts, have recognized instances of the destruction of cultural property as proof of the intentional physical destruction of a group in recent decades. For example, in 2001, the Trial Chamber of the International Criminal Tribunal for the former Yugoslavia had argued that “there are often simultaneous attacks on the cultural and religious property and symbols of the targeted group as well, attacks which may legitimately be considered as evidence of an intent to physically destroy the group.”[14]

“Such acts,” said Polish Jewish lawyer and drafter of the CCPG Raphael Lemkin in the mid-twentieth century, referring to both physical and cultural acts of genocide, “reveal an asocial and destructive spirit that shocks the conscience of humanity, while generating extreme anxiety about the future.”[15] What is most alarming is that ISIS’ cultural genocidal acts have not yet “shocked the conscience of humanity.”[16] So long as the world remains silent, the cultural and historical heritage of entire religious minorities will remain in danger of being reduced to rubble. And so long as the world remains passive, entire peoples will remain forgotten in practice and in memory.

[3] Caroline Fournet, The Crime of Destruction and the Law of Genocide: Their Impact on Collective Memory (Farnham: Ashgate Publishing, 2007), accessed March 30, https://books.google.ca/books?id=mAn-ExeN_p8C&dq=cultural+genocide&source=gbs_navlinks_s, 43.

[7] Fournet, The Crime of Destruction and the Law of Genocide,43; Vrdoljak, International Law, Museums, and the Return of Cultural Objects, 169.

[8] Fournet, The Crime of Destruction and the Law of Genocide,43; Vrdoljak, International Law Museums, and the Return of Cultural Objects, 169.

[10] Fournet, The Crime of Destruction and the Law of Genocide, 43.

[12] “Second Protocol to the Hague Convention of 1954 for the Protection of Cultural Property in the Event of Armed Conflict 1999,” UNESCO.org, accessed March 31, http://portal.unesco.org/en/ev.php-URL_ID=15207&URL_DO=DO_TOPIC&URL_SECTION=201.html.

[13] Fournet, The Crime of Destruction and the Law of Genocide, 44.