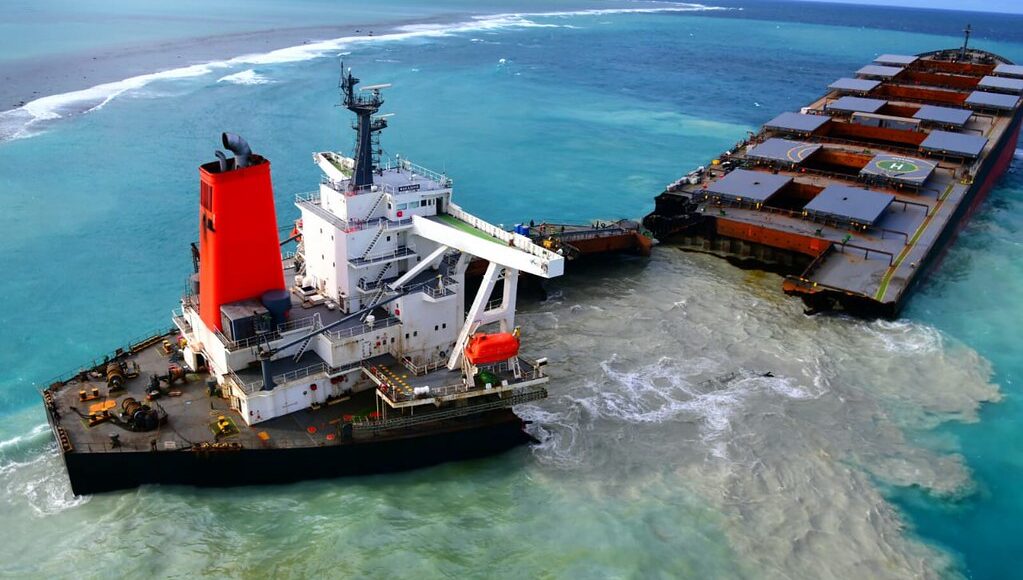 In the early hours of July 16, a Japanese shipping vessel entered the Indian Ocean after a stop in Singapore. At this point in time, the MV Wakashio was following its regular route. Strangely, at 2:00 am on July 21, the vessel deviated from its route, effectively putting it on a collision course with the southern reefs of Mauritius. Following this unusual path, the MV Wakashio entered the Mauritian Exclusive Economic Zone on July 23. That very night, the ship collided with pristine coral reefs near the coastal town of Mahebourg, after the National Coast Guard failed to contact its captain. The MV Wakashio sat atop the reefs for two weeks, breaking apart and hemorrhaging 1,000 tonnes of oil in the ocean, before salvaging operations picked up speed.

But disaster had already struck, planting the seeds of a social uprising. Few could have expected that just a few weeks later, this event would trigger a massive protest on the streets of the Mauritian capital, Port Louis. The government’s poor response caused widespread public anger that spilled onto the streets as protesters sought to express their concerns about the environmental and economic impacts of this disaster.

Almost immediately after the onset of the oil spill, Mauritian opposition leaders began asking how such a large ship succeeded in getting so close to the nation’s coasts. They questioned the Coast Guard’s inaction, emphasizing that their patrol vessels had failed to intercept the ship, even after becoming aware that it had engaged on a collision course with Mauritius. In response to this, the prime minister explained that the MV Wakashio had been contacted multiple times, but that the captain had not responded to these calls. If true, this explanation raises national security concerns, highlighting the government’s inability to protect its territory from unwelcomed ships.

In parliament, the Minister of Fishing and Shipping offered a different explanation, claiming that current laws had prevented Mauritanian authorities from stopping the ship. However, in this particular situation, the UN Convention on the Law of the Sea explicitly provides the government with the authority to do so, given that the ship posed a grave environmental threat to Mauritius. These contrasting accounts show a worrying pattern of poor communication and a clear lack of coordination amongst those in charge. Additionally, the government’s refusal to take responsibility for failing to protect its waters from an unwelcomed ship by hiding behind unfounded legal constraints gave opposing political parties a chance to unify their voices and form a de-facto alliance.

Concerns about the dismally slow response to the spill itself were also raised, prompting the government to claim that bad weather had kept rescue teams from coming close to the ship or boarding it. Yet, meteorologists have suggested that operations would have been possible despite suboptimal weather. Hiding behind dubious claims of bad weather cannot be justified, especially when considering Mauritius’ history of grappling with unwelcomed oil tankers. Indeed, this is the third time an oil-carrying ship has found itself stuck on the Mauritian Coast, preceded by the MV Benita in 2016 and the MV Angel in 2011.

Even as the MV Wakashio split in two and public anger grew, the Mauritian government made no apologies. Very infamously,  Prime Minister Pravind Jugnauth lashed out at a journalist, heatedly asking, “Am I at fault?” when questioned about his government’s handling of the issue. There was no resignation or firing at any level of government even in the face of this severe failure. Instead, Jugnauth barred journalists from Mauritius’ largest newspaper, L’Express, from attending a press conference while making the seemingly unfounded claim that they had spread “fake news”.

Matters continued to worsen as the government chose to sink one half of the ship in an undisclosed location off the southeast coast of the island, a decision that could potentially harm whale nursing grounds as the ship begins to rust. Exactly where the remnants were sunk remains unknown, and footage of the event was only captured by a journalist who chased the tugboats at his own risk.

A tipping point occurred when dead dolphins and whales began washing up on the island’s beaches. Approximately 40 died in just a few days, while the Mauritius Broadcasting Corporation — the national public broadcaster, essentially serving as the government mouthpiece — largely ignored this situation. Instead, it aired an interview with the Minister of Shipping  who claimed that the deaths were entirely unrelated to the oil spill. His position only aggravated public frustration and reinforced the image of an unaccountable government.

On August 29, this public frustration boiled over and led to a historic protest in Port Louis, attracting nearly 75,000 people in front of the Parliament. The presence of the Mauritian flag was ubiquitous, along with chants demanding that the Prime Minister and his entire cabinet resign. In this crowd, conservationists worried about the damage caused to the mangroves, corals and the rich marine life for which Mauritius is well-known. Indeed, a rusting ship at the bottom of the ocean releases toxic chemicals and heavy metals that will cause severe adverse effects for decades to come. Others were concerned about the disaster’s impact on the tourism industry, a sector that accounts for approximately 10 per cent of the economy and approximately 30,000 jobs in a population of only 1.3 million. While the industry has already been severely battered by the border closures stemming from the ongoing pandemic, widespread negative publicity surrounding the spill is likely to discourage tourists from visiting the island in the near future.

It is worth noting that protests of this scale in Mauritius are uncommon, and historically have been the catalysts for profound change. The last major gatherings of this size date back to 1975, when student protests led to a reform of the education system, and 1982, which marked the end of a political era following the defeat of Mauritius’ first prime minister. Given this historical precedent, the current Mauritian government should pay close attention to the concerns of its citizens and begin taking action by issuing a formal apology, before addressing the long-term impacts of this disaster.

The featured image by the International Maritime Organization is licensed for use under CC BY 2.0. No changes were made.