Discourses of Inherent Female Victimization are Bad for Foreign Policy 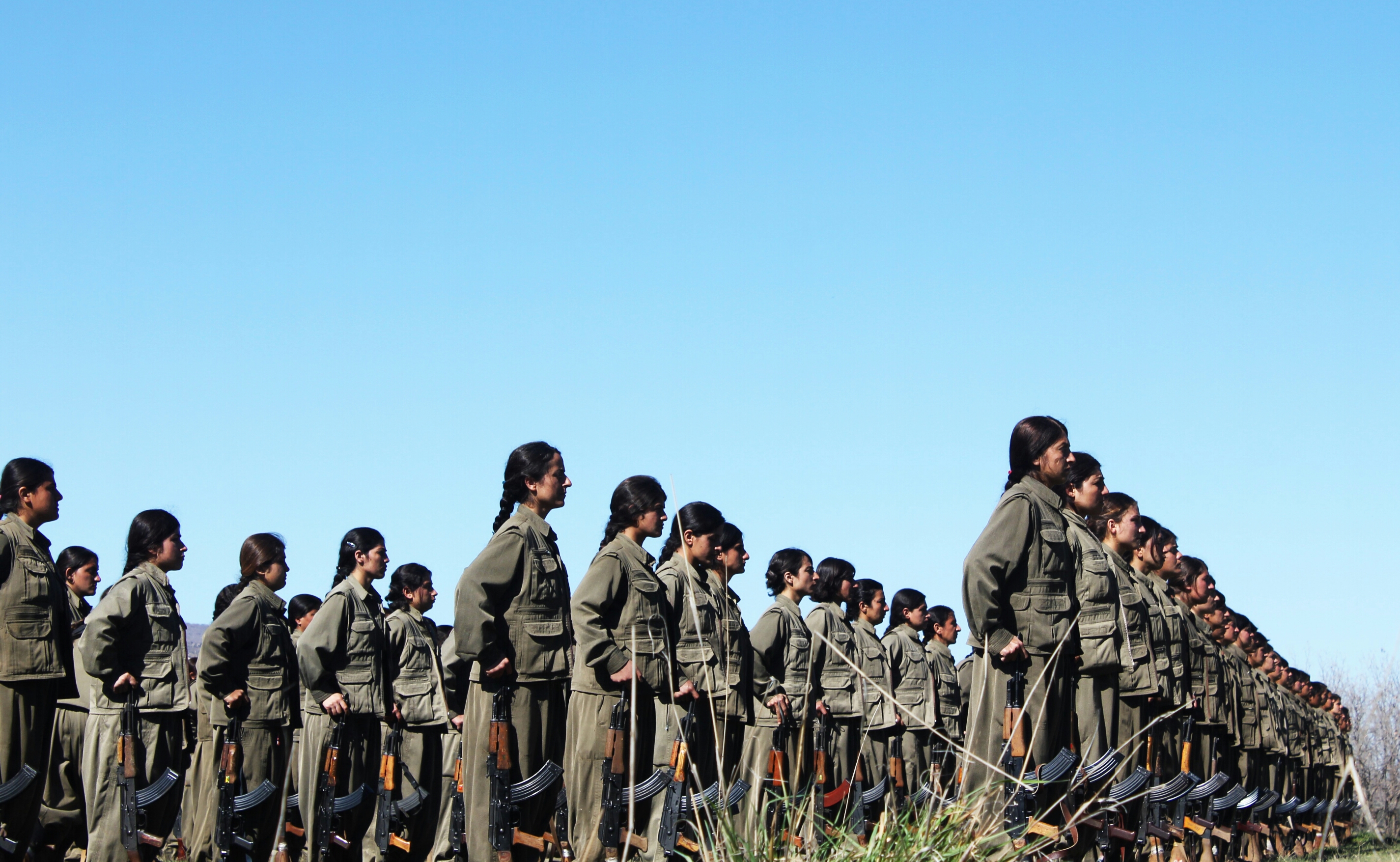 In the western world, the perception that women are inherently less capable of violence than men heavily influences foreign policy responses to conflict. The “masculinity” of aggression is informed by the empirical reality that men commit most violent acts, but such a perspective fails to recognize that women can and do participate in violence in ways that contribute to insecurity. Scholar Barbara Eihrenreich deconstructs the myth that women are perpetual victims in examining the case of torture and abuse carried out against Iraqi prisoners by female U.S. soldiers at Abu Ghraib prison in 2004. She argues that equating women with passivity and peace is a lazy form of feminism — it implies that the mere existence of women can contribute to a conflict’s resolution, or at least that they do not contribute to it’s intractability.

The assumption of female victimhood underlies foreign policy responses towards insecurity in the Middle East, particularly in the realm of terrorism and the Islamic State. For example, in highlighting the bravery and skill of the female Kurdish fighters combatting ISIS, western media coverage sensationalizes them in a way that contributes to the illusion that women very rarely play an active role in conflict. The reality of increasing female participation in terrorism, such as the brigade of all female jihadis within ISIS and other instances of female radicalization, is also strong evidence to the contrary. While women are all too often the recipients of violence, actively acknowledging the diversity female involvement in conflict areas will make U.S. policy more impactful by better representing reality of security situations.

Western news coverage of the Kurds, a non-Arab ethnic population in Syria, Iran, Iraq and Turkey that seek autonomous self-rule, has focused on the Syrian Kurdish Women’s Protection Unit (YPJ) and the expansion of their operations against ISIS. This article and others (see here, here and here) tend to focus narrowly on the YPJ and not the broader Kurdish military and political struggle which women are also a part of. For example, in the autonomous Syrian Kurdish province of Rojava, the female co-chair of the Syrian Democratic Union Party Asya Abdullah is pushing a feminist democratic agenda in addition to helping lead the fight against he Islamic State. The original 16 members of the militant Turkish Kurdistan Worker’s Party (PKK) included multiple women and today membership is 50 percent female. It would be inaccurate to call Kurdish society gender-equal, but female participation in defense and governance is greater and has deeper historical roots than the articles imply.

Portraying the YPJ as a novel and spontaneous reaction to the rise of the Islamic State is an erasure of the wider purview of female involvement. Kurdish activist Dilar Dirik argues that western media is so “preoccupied with attempts to sensationalize the ways in which these women defy preconceived notions of eastern women as oppressed victims, [that] mainstream caricaturisations erroneously present Kurdish women fighters as a novel phenomenon.” Well-intentioned western support should recognize the YPJ a function of wider female participation in the Kurdish military and political agenda, not just the exception to the rule when it comes to women’s involvement in armed struggle.

Dirik’s criticism of media coverage also applies U.S. foreign policy establishment. Today the definition of security is expanding beyond the state and military centric models, but government policy still perpetuates a dichotomy that women are passive and men are conflict prone. The assumption that women are necessarily the victims of violence takes on added dimension in the Middle East where western foreign policy reinforces stereotypes that link Islam and the oppression of women. Scholar Layla Saleh argues that since the beginning of the War on Terror, U.S. foreign policymakers have consistently emphasized the vulnerability of Muslim women in “need” of western “empowerment.” This discourse played a large role in morally justifying the U.S. intervention in both Afghanistan and Iraq.

In highlighting the discourse of victimization, I do not mean to diminish situations of victimhood and female suffering. Women living in Syria face routine sexual violence perpetrated by both government and opposition forces. Generally speaking, women suffer “disproportionately” during and after conflict. Economic disenfranchisement, violence due to the proliferation of conventional weapons and pervasive sexual exploitation in war impacts women to a greater degree than men. Although the idea that women are inherently peaceful is a severe misconception, female participation in conflict resolution has shown to be pivotal for lasting peace. Research indicates that agreements are more likely to be reached and endure if female voices participate in peacemaking. Women face a continuum of violence that rarely ends when hostilities formally cease, and this unique experience makes them more likely to address the cause and effects of conflict during negotiation of peace.

One danger of an essentialist view of the relationship between women and violence is that it prevents an accurate assessment of terrorist threats. The Institute for Strategic Dialogue based in London reports that of the 4,000 European nationals who joined ISIS in 2014 and 2015, over 550 of them were women in their early twenties. The number of women joining ISIS from the Gulf States and Muslim majority countries such as Bosnia and Chechnya is also significant. Women are often coerced into supporting the cause, but there is evidence that many join independently and with diverse motivations. A recent study by the Institute for Strategic Dialogue concludes that “the assumption that females join ISIS primarily to become ‘jihadi brides’ is reductionist and above all, incorrect. Reasons for females travelling are multi-causal and include a broad range push and pull factors.” The Islamic State’s all-female brigade in Raqqa that violently polices civilian women who do not adhere to Sharia law complicates the picture of extremism. In addition to undermining gendered stereotypes in security, it demonstrates how misogynist ideology and routine sexual violence against women does not necessarily prevent female recruitment.

It is likely that gender inequity in the U.S. foreign policy establishment itself helps perpetuate a highly gendered view of conflict. Pulling data from publicly available rosters, Foreign Policy found that women make up only 21 percent of policy related positions among the 10 most prominent think tanks in Washington D.C. This is consistent with the number of women in government as well. For example, of the Pentagon’s Senior Defense Officials, only 16 percent are women. More troubling, a survey of foreign policy professional found that respondents were more likely to believe gender mattered in policy realms such as education and health, but much less so when a policy dealt with use of force; however, answers differed dramatically based on sex. When asked about the relevance of gender in the impact of policies related to terrorism and countering violent extremism, 49 percent of women considered them “very relevant” compared with 29 percent of men. In general, female respondents were much more likely to believe they needed to think about both men and women when constructing policy. By relying predominantly on the voices of men, the foreign policy establishment loses out on key insights from female policymakers who are more likely to consider the female experience in conflict. Increasing the number of women who create foreign policy could ensure that gender is given a more central role in security considerations.

Today men and realpolitik dominate foreign security in the United States. They seek to see the world as it “really” is instead of how it normatively ought to be, yet the reality that women play highly diverse roles in conflict seems lost on Washington. The role of female Kurdish participation in defense and governance and the rise of women who are independently recruited and radicalized by Islamist groups without coercion exemplifies the disconnect between policy and the dynamics of insecurity. A more appropriate approach would depart from gendered stereotypes surrounding conflict and peace, a reconceptualization that would likely be aided by louder female voices in the foreign policy establishment.