“Do Not Go Gentle Into That Good Night… Rage against the Dying of the Light.” 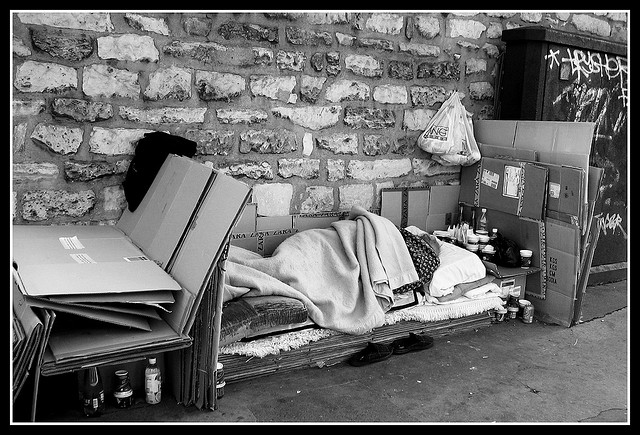 3.5 million people experience homelessness at some point in a year in the United States: on a given night in January 2013, there were 610,042 homeless individuals.[i] On average, a homeless person will remain so for eight months.[ii] The U.S. Department of Health and Human Services defines a homeless individual as someone “who lacks housing, including an individual whose primary residence during the night is a supervised public or private facility that provides temporary living accommodations, and an individual who is a resident in transitional housing.”[iii] While the core cause of homelessness is economic, its results are severe social ramifications including deficiencies in education and health.

Homelessness in the U.S. rapidly escalated in the 1980s, after a 70% budget cut on housing assistance programs for low-income populations.[iv] According to studies executed by the National Low Income Housing Coalition, to afford a two bedroom house in 2014, one would have to make an hourly wage of $18.92, 2.5 times more than the federal minimum wage.[v] Those living off of minimum wage have little ability to afford housing, even with full-time hours.[vi] Despite the clear economic barriers to housing, stigma for the homeless continues based on misconceptions of laziness and merit. In Columbia, South Carolina, the City council attempted to pass a bill that would segregate the homeless by locating the shelters to be 15 miles outside of the city.[vii] “People are afraid to get out of their cars when they see a homeless person”, said the owner of a luggage store. Another executive complained that staff members and guests feel unsafe and that it is “virtually impossible for us, or anybody, to create a sustainable business model” due to the presence of homeless people on the streets.[viii] Councilman Cameron Runyan strongly advocated for the bill, and offered three choices for the homeless: change shelters, go to jail, or leave Columbia.[ix] However, due to the adamant opposition of advocates for the homeless, and the support of the police, the court rescinded the “decision to criminalize homelessness.”[x] Robert Adelman, a sociologist at the University of Buffalo, criticized that these policies are proposed across the country, because they “just redistribute homeless person” and “don’t solve the problem of homelessness.” [xii] Despite the council’s promises to install public bathrooms and kitchens in the shelter, no effort to do has occurred.[xi]

Bill Wolfe, executive director of the Homeless Children’s Education Fund lamented that “for homeless children, keeping up with schoolwork amid chaos – the entire family living… in a different motel every night, or in a family car – can be a struggle.”[xiii] Although there was a decrease in the homeless population by 2.7% from 2012 to 2013, the number of homeless children actually increased by 10%. [xiv] There were 1.2 million homeless students in the public school system who experienced homelessness at some point during the year.[xv] Homeless children are 60% more likely to drop out of school compared to their peers, and the budget cuts to many state education departments are only exacerbating this crisis.[xvi] For example, in Alabama, where some school districts doubled in their number of homeless students, the state reduced funding for them by half. This reduction limits the school from providing health and nutritional services and extra academic support to those with dire need.[xvii] The schools with the densest homeless population are those in the highest poverty districts, and unfortunately, those that are targeted for reconstruction and privatization, on the premise of increasing test scores. [xviii] In three years, the demographics of homeless children have increased in regards to limited English proficiency by 13% and those with disabilities by 24% within three years.[xix]

Children also suffer emotionally and mentally. Since so many homeless children drop out of school, the 1.2 million within the public school system does not wholly represent the population, as there were 2.5 million children who experienced homelessness during the year. Carmela DeCandia, the director of the National Center of Family Homelessness, explained, “they are not just losing a house, a shelter. They’re losing their sense of place, of community.”[xxiii] “America’s Youngest Outcasts”, a report on child homelessness, identified major causes contributing to dramatic increase in the rate such as challenges of single parenting, domestic violence and other traumatic experiences.[xxiv] Profound changes ultimately take place within the children, putting them more at risk to encounter emotional and mental struggles such as anxiety, depression, withdrawal and aggression.[xxv] American education agencies set their goal of having one school psychologist for every 700 students, but even the goal itself is an underachievement when considering all the children in need.[xxvi] A specific group, the LGBTQ, needs exceptional attention since they comprise the largest population group (35%) amongst homeless youth.[xxvii] Many of them are predisposed to mental problems for the physical abuse and emotional isolation experienced at home due to their LGBTQ identity. LGBTQ homeless youth are twice as likely to attempt suicide (62%) as heterosexual homeless youth (29%), and they report that even in shelters and drop-in centers they are attacked with abuse and harassment from peers and staff.[xxviii] Without addressing the concerns of homelessness in the LGBTQ community, no adequate measures can solve the inherently socioeconomic issue of homelessness.

Deterioration of mental health is another devastating aftereffect of homelessness. First and foremost, prolonged stress from constantly searching for “survival” is an acute source of mental exhaustion and instability. The loss of a stable shelter and family connection is very traumatic to the average person and frequently leads to post-traumatic stress disorder (PTSD). The most common symptom of PTSD is reliving the traumatic event, with comorbidities of hallucination of the event, emotional detachment, arousal, outbursts of anger and sleep disturbances. It is such behaviors seen on the streets that are stigmatized and impair the public’s sentiments on homelessness. PTSD is complex because even permanent housing is an ineffective solution; because of its post-traumatic nature, the disorder lingers on until patients receive medical treatment such as behavioral-cognitive therapy.[xx] It is sharply prevalent in the 900,000 chronically homeless people. Chronically homeless is defined as being homeless for more than a year or homeless for four episodes within three years with a disability.[xxi] Many of the 600,000 homeless veterans likely became homeless during or after suffering from PTSD.[xxii]

While in major cities in the U.S., homelessness has become normalized and easily ignored. Homelessness, however, is neither natural nor inevitable. As put by Dylan Thomas, “do not go gentle into homelessness… rage against the dying of human empathy.” It is impossible to immediately eradicate homelessness, but there are some promising initiatives in the United States. In 2010, the Interagency Council on Homelessness presented the “Opening Doors” plan with an objective to “integrate primary and behavioral health care services with homeless assistance programs” and to open “access to education… [to] help decrease financial vulnerability and the likelihood of homelessness later in life.”[xxix] Their goal to end chronic and veteran homelessness by 2015 has been in progress, with more potent methods to end family and child homelessness by 2020.[xxx]

While the governments and agencies have their own responsibilities in reducing homelessness, each individual should also have a sense of duty to an individual homeless person. As Mitch Snyder, who once was homeless, and now is advocating for the issue, stated: “The next time you see someone out on the street, don’t pass them by. Say hello, ask them how they’re doing. Get them something to eat. Just tell them that you care. Tell them that they are human beings. And I think that’s what I would ask of anyone.”[xxxi]

[iii] What is the official definition of homelessness? (2015, January 1). Retrieved March 31, 2015, from https://www.nhchc.org/faq/official-definition-homelessness/

[iv] Canada Mortgage and Housing Corporation. (1998). The Role of Public-Private Partnerships in Producing Affordable Housing: Assessment of the U.S. Experience and Lessons for Canada. Retrieved March 31, 2015, from http://www.cmhc-schl.gc.ca/odpub/pdf/61592.pdf?lang=en