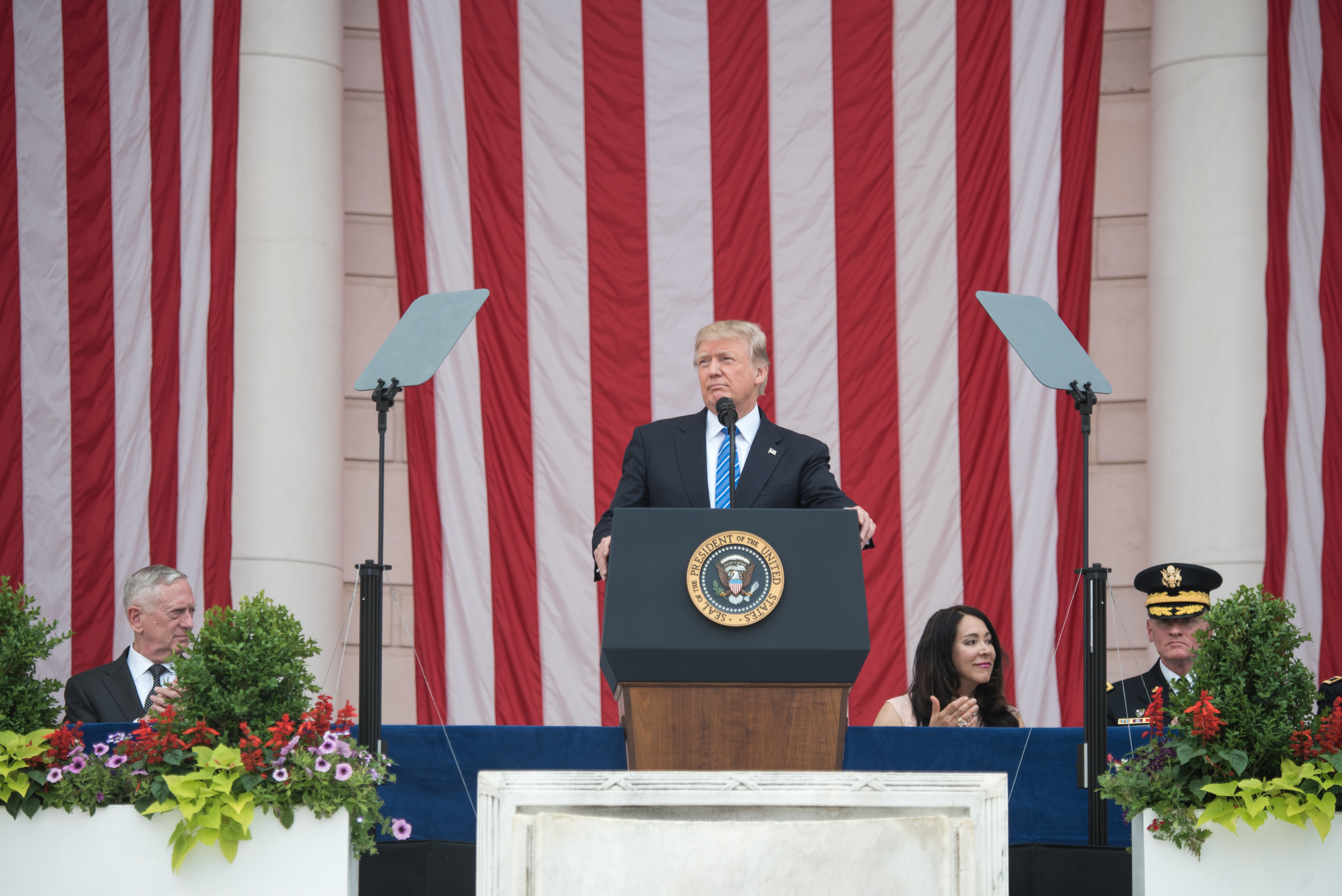 On May 18, Donald Trump delivered the commencement speech to the Coast Guard Academy class of 2017  in New London, Connecticut. The speech, which was a golden opportunity for Trump to talk about one of his favorite topics, the U.S. Military, started off quite well. He congratulated the graduates for choosing the path of service, telling them to ‘‘never, never, never give up’’ and described different missions and roles that were awaiting them. But then, instead of continuing to praise the graduating class, he decided to make himself the center of attention. He complained about negative media coverage, going as far as saying that ‘‘no politician in history…has been treated worse or more unfairly’’. While the speech was praised by some, it was criticized by others for turning a commencement address into a campaign rally. The speech was actually an accurate analogy of Donald Trump’s relationship with the U.S military. He clearly enjoys the prestige and pageantry that comes with being commander-in-chief of the biggest military in the world. However, he often puts his own interests above what is best for the troops. Like the man himself, it seems like Trump’s relationship with the U.S military is complicated.

During the Republican primaries, he skipped the January 28th debate to organize a televised fundraiser for veterans that reportedly raised $4.5 million. One of his main campaign promises was to dramatically increase military spending, and he has expressed the wish to transform the Fourth of July celebrations into a full-blown military event. Recently, he has opposed NFL players kneeling during the anthem, tweeting it disrespects ‘‘courageous patriots that have fought and died’’.As President, he has surrounded himself with decorated veterans.

His chief of staff, John Kelly, served for nearly five decades in the Marines but did not have any political experience prior to serving in the Trump administration, and was called dismissive by some Democrats during his short tenure as Homeland Security Secretary. James ”Mad Dog” Mattis, his Secretary of Defence, is a retired four-star General who believes Iran is the “single most enduring threat“. Like Kelly, Mattis does not have any formal political experience. As National Security Advisor, Trump first appointed Michael Flynn, a retired three-star General who was fired by Obama in 2014 from the post of Pentagon intelligence chief. After Flynn resigned due to undisclosed ties with Russia, Trump picked H.R. McMaster, a lieutenant and ”warrior-thinker”, as his new National Security Advisor.

At first glance, Donald Trump’s recent military appointments and veteran-pandering campaign history may illude that he could be a respectful and inspiring commander-in-chief, but that is far from the case. As a young boy, he attended the New York Military Academy for five years, which he believes provided him with ‘‘more training militarily than a lot of the guys that go into the military’’. Yet, while he attended military school until 1964, he did not serve in Vietnam. He deferred his enrolment four times while he was in college until 1968, and then would have been available to serve. However, he obtained a fifth and final deferment due to bone spurs in his heels. During the 2016 presidential campaign, he claimed that Senator John McCain (R-AZ), a prisoner of war during the Vietnam War, was only seen as a hero because ‘‘he was captured’’. McCain, who was captured when his plane was shot down, spent five years in captivity. His lack of respect for a man who was tortured for five years while serving his country is quite ironic, given that Trump used legal loopholes in the law to defer his service five times.

Furthermore, Trump surrounding himself with decorated generals and voicing his support for U.S troops does not equate to a good treatment of current U.S troops. Early in his Presidency, he announced his decision to ban transgender people from serving in the military. The ban was first announced on July 26 through a series of tweets from Trump, in which he called transgender troops a “burden”. However, a 2016 study conducted by the Department of Defence concluded that allowing transgender troops to serve would only have a minimal impact on the military, because there are so few of them (between 1,320 and 6,630, according to the same report). Trump’s ban of transgender troops seems to contradict his desire to see the U.S military excel as it would only prevent more Americans from serving their county. As it stands, the ban was partially blocked on October 30th by a judge from the US District Court for the District of Columbia.

Trump does not seem to understand the actual danger of warfare. Earlier this year, while meeting with U.S military leaders, he talked of ‘‘calm before the storm’’. Reporters then asked him what storm he was referring to, and he replied “you’ll find out’’. He might have been referring to North Korea, which he promises to denuclearize. Tensions between Washington and Pyongyang have been escalating since the start of Trump’s Presidency. In a speech to the U.N General Assembly, Trump nicknamed Kim Jong Un ‘‘Rocket Man’’, while North Korea has been conducting more and more ballistic missile tests. Trump wants to intimidate North Korea with his harsh talk, but his desire to flex his muscles could place the U.S military in a very dangerous position against an unpredictable rival. Trump could also have been talking about Iran. He has been critical of the nuclear deal with Iran, calling it ‘‘one of the worst and most one-sided transactions the United States has ever entered into’’. In reaction, on November 4th, 2017, thousands of Iranians walked in the streets of Teheran to celebrate the 38th anniversary of the seizure of the U.S embassy, and at the same time protest Trump’s decertification of the nuclear deal. For the occasion, a ballistic missile was put on display near the former embassy. Cleary, Iran will not let itself be intimidated by Trump’s actions. Like with North Korea, a possible conflict with Iran could have devastating consequences for the U.S military.

Trump also seems to have a lot of difficulties with what could seem a simple task of the commander-in-chief: comforting families of fallen soldiers. During the 2016 election, Trump feuded with the Khans, a Gold Star family. After Mr. Khan blasted Trump during the Democratic National Convention, Trump implied that he had forbidden his wife from speaking during his speech. Then, when four Green Berets died in Niger in early October, it took Trump more than two weeks to acknowledge their deaths. When he finally did, he claimed that former presidents did not contact the families of fallen soldiers, which is not true. For example, after 38 people died when a military helicopter was shot down in Afghanistan, President Obama personally consoled the families of all those killed. Furthermore, Myeshia Johnson, the widow of Sgt. La David Johnson, who was one of the four soldiers killed in Niger, heavily criticized the call she received from Trump. He reportedly told her that her husband ‘‘knew what he signed up for, but I guess it still hurts”, and stumbled on La David Johnson’s name. Trump replied to her via Twitter, writing the two ‘‘had a very respectful conversation with the widow of Sgt. La David Johnson, and spoke his name from [the] beginning, without hesitation’’. Other families have come forward claiming Trump didn’t call after the death of their loved one, while some say they received letters from him. Former Presidents did not call every single family, but Trump’s claim that he’s ‘‘called every family of someone who’s died’’ is a lie. He tried to make a political gain by positioning himself as better than his predecessors to comfort families of fallen soldiers. However, feuding with a military widow only illustrated his lack of respect for U.S troops.

In 2016, Trump won the veteran vote 2-to-1 over Hillary Clinton, according to CNN exit polls. As president, he has signed into law the Forever GI Bill, which extends the education benefits of the GI Bill to more veterans and allows them to use the benefits for longer.  However, since his election a year ago, he has not always served as the champion of the military. He is willing to use the U.S military to serve his own personal interests, without any regard for the lives of current troops and veterans. It is impossible to predict what a major war could look like with Trump as commander-in-chief. Given his current track record, he would most likely publicly support the troops as long as they make him look good, but it’s hard to believe he would genuinely care about them. So far, his selfish interests have trumped the common good of the U.S military. If Trump wants to be remembered as a good commander-in-chief, he will need to stop acting out whenever he feels personally threatened and put the needs of the military as whole above anything else.