The Drug War You’ve Never Heard Of: The Green Revolution and Narco-Politics in Punjab 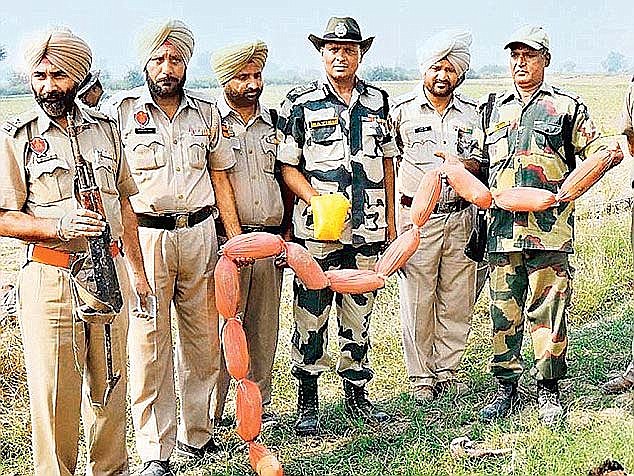 Located in Northern India on the border with Pakistan, Punjab is a land famous for its warriors and agriculture. Dubbed the gateway to India, its inhabitants have long witnessed struggle and have fought to protect its lush irrigated fields and sleepy villages from invaders since the era of Alexander the Great. In recent times however, this land has been wrenched by a very different type of conflict. Now suffering from the highest rates of addiction in the country, Punjab has become the main trafficking point for heroin and opium making their way from Afghanistan, through Pakistan and then across the border into India.

In the 1960s and 70s, the primarily agricultural state of Punjab was swept by unprecedented change brought on by the Green Revolution. Traditional methods of farming and cultivation were replaced with fertilizers and genetically modified seeds, while the labour intensity of agriculture drastically decreased due to greater mechanization. Despite the exponential rise in yields and the wealth this brought to many, the movement had severe economic repercussions for those who did not reap its benefits. The rapid rise of labour productivity in agriculture caused a shrinking amount of employment in the sector (employment in agriculture declined from 62% net employment  in 1971 to 36% in 2011). This had severe repercussions for the landless poor of the state, whose typically seasonal employment has largely been replaced by machines.

Despite its shrinking share of employment, Punjab has largely maintained its economic reliance on agriculture, as other sectors have failed to increase in size to substantially absorb the excess labour. The result is high unemployment levels, particularly among the youth, and a widespread sense of disillusionment with the state’s governance. With few other options, many in the state have found solace and employment in either the trafficking or use of drugs. It is estimated that at least 67% of Punjabi households have at least one drug addict, while the rate of opium abuse alone per 1000 members of the population is higher than the overall drug addiction rates for the rest of the country.

Previously a mere transit point for the movement of drugs, Punjab became a hotbed of drug abuse largely due to the substances’ easy availability. Heroin is quite common throughout Punjab’s towns and cities and is generally the drug of choice for the rich, sold by dealers at a price of roughly $42 USD per gram. Those who cannot afford the cost of the expensive drugs smuggled across the border turn to one of numerous illegal chemists, who offer cheap opioid alternatives at a much lower cost and rarely ask for prescriptions.

Responses by the police have been varied in both effectiveness and approach. While the police have made several attempts to halt the flow of drugs, widespread allegations of police and government involvement in the narcotics trade run rife. The border between Pakistan and India is one of the most militarized in the world, with border security forces and military regularly patrolling the area. Despite this, drugs are clearly still finding their way across the border. Many allege that this is due to officials within the police and border security forces’ complicity with smugglers. There have been several cases of police officers in the state getting booked for involvement in the drug trade. The 2009 arrest of Saji Mohan, an officer from the Narcotics Control Board caught pilfering heroin from police seizure for resale, has come to exemplify this problem, and it is but one example of many.

It is not just the police that are involved in the smuggling of drugs, with many prominent politicians also having alleged connections to drug cartels. After his 2013 arrest, high level cartel member Jagdish Singh Bhola named several members of government, who he claims aided and abetted him in his smuggling activities. This list named several members of the then- ruling SAD (Shrimoni Akali Dal Party), including Bikram Singh Majithia, the former Chief Minister’s brother in-law, who was serving as Minister of Revenue at the time. Despite the allegations and photographs which recently surfaced of Majithia with known cartel drug smugglers, Majithia has continued his political career with the SAD and recently won the assembly seat for his district in the 2017 election.

Former Chief Minister Prakash Singh Badal is well-known for having taken minimal action  against the drug issue. After being asked in 2007 by Badal to compile a list of threats to public safety within the state, former director general of police Shashi Kant drew up a four page list including several high-up politicians and police officers who he alleged were patronizing Punjab’s drug barons. After presenting the list to the Chief Minister he was reportedly told that “there is no need to get into these things, as there are more pressing issues.” After the incident, Shashi endured a fall from grace, which saw him removed from his position and placed as Director General of Prisons instead. Many speculate that Badal’s refusal to address the list was because several of his cronies and party members were listed on it, a fact that he vehemently denies.

Perhaps most shocking are allegations of drug handouts during elections to woo voters. Handouts of money and alcohol have long been common practice in India; however, Punjab has recently seen handouts of opioids to woo voters instead. In Gurdaspur district, voters allege that campaigners went door to door, promising narcotics in exchange for votes for their candidate in the election earlier this year. The election commission in Punjab first noticed this issue during the 2012 election, when over 50 kg of heroin was seized across the state for reported distribution to voters. Police attempts to curb the propagation of drugs through spot checks during this year’s election did seize considerable quantities of drugs, but it did little to stop their proliferation to voters in many of the villages in Punjab’s rural heartland.

With its recent win over the previously- ruling SAD, the INC (Indian National Congress) under the leadership of Chief Minister Amarinder Singh is taking a hard stance on drugs. The recently formed anti-establishment Aam Aadmi Party (translated as Common Man’s Party) won the second most seats in the state, relegating the scandal-marred SAD to a third place position in the state’s legislative assembly. However, a change in political leadership does not necessitate a change in Punjab’s murky politics. Should Amarinder Singh choose to continue the policy of his predecessor, turning a blind eye at allegations against his party members, the proliferation of narcotics across the state will likely continue. However, even with a complete institutional purge and the removal of so called “dirty” politicians and policeman involved in drug smuggling, the state’s economic woes will continue. Without the creation of new jobs and the expansion of non-agricultural economic sectors, the state will likely stay in a position of economic limbo. The the Green Revolution’s grip on the state is still being felt with higher yields but fewer jobs, something which politicians (including Amarinder in his previous office as Chief Minister) have largely negated to address. Amarinder has made attracting investment and industry into the state one of his key priorities, but only time will tell if it will be enough to make a dent in the economic clout that narcotics hold throughout the state.