Duterte and the South China Sea: A Carousel of Partnerships 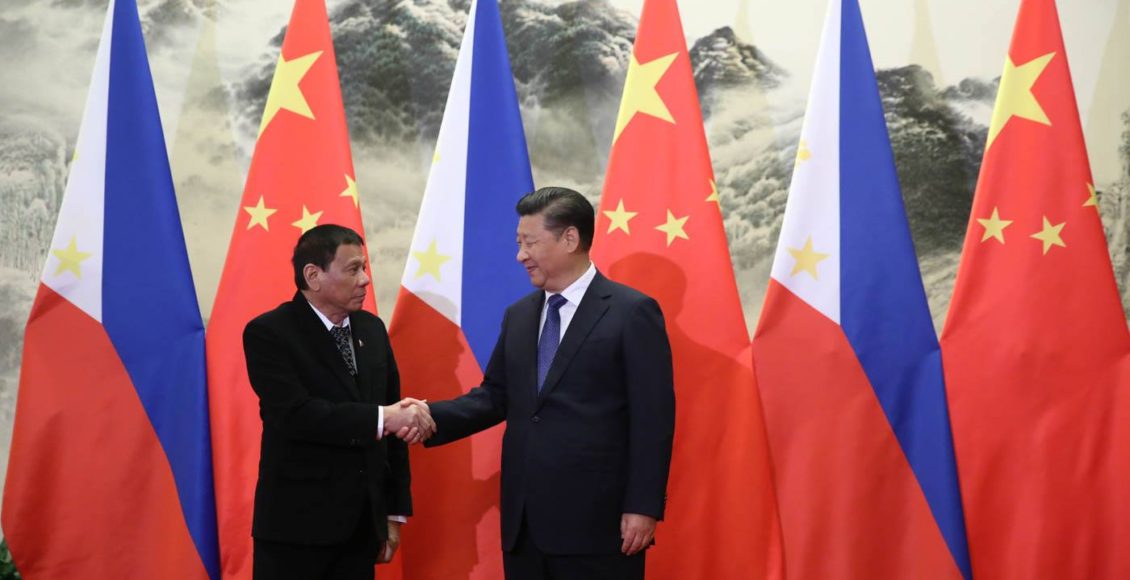 President Rodrigo Roa Duterte and People’s Republic of China President Xi Jinping shake hands prior to their bilateral meetings at the Great Hall of the People in Beijing on October 20. Photo by King Rodriguez/PPD
Share

Earlier this year, I outlined the roots of the ongoing dispute over the South China Sea and the upending of traditional Philippine foreign policy by incumbent President Rodrigo Duterte, wherein he spurned the country’s long-time pro-American stance in favour of improving relations with Beijing. However, despite the apparent warming of relations with China, it would appear that circumstances have prevented Duterte from completely entrenching himself within Beijing’s sphere of influence.

Cozying up to China

In spite of the tensions surrounding the disputed South China Sea (or as it was re-named by Duterte’s predecessor, the West Philippine Sea), 2018 saw the presidents of the two countries agree to a preliminary deal that would seek possibilities for joint resource exploration in the region. Moreover, China remains the Philippines’ primary trading partner and has become a significant sponsor of a number of Duterte’s economic policies, such as committing to finance and construct several of his infrastructure projects. From the outset of his presidency, Duterte couched himself with Beijing without much hesitation on the back of a strong anti-West and anti-imperial rhetoric.

However, Duterte’s embrace of China is not shared by his constituents. The president maintains strong approval ratings from the Philippine citizenry, but the people remain at odds with their leader regarding the South China Sea. Considering the 2016 Hague Tribunal that invalidated China’s claim to the disputed waters, Filipinos have been resentful of Beijing’s expansionism. In a recent poll, 87% of Filipinos expressed dissatisfaction with Duterte and supported more assertive action that would affirm the Philippines’ sovereign rights in its exclusive economic zone (EEZ). Moreover, despite China’s verbal commitments to funding and investing in government projects and the Philippine economy, little of these funds have materialized. In light of this context, Duterte publicly stated that he would mention the tribunal’s ruling during his August 2019 visit to China. However, skepticism over this claim lingered, and ultimately Duterte’s bravado failed to manifest any improvements in the Philippine’s sovereign claims to the disputed waters. Upon his return from China, Duterte announced that his administration would be “ignoring” the Hague Tribunal’s ruling after Chinese President Xi Jinping would not “budge” on the matter. Instead, the two presidents compromised on an agreement that would allow Chinese exploration in the disputed waters in exchange for the Philippines receiving 60% of its revenues. This 60-40 proportional split between the Philippines and China, respectively, meets the standards of the Philippine constitution, which is “clear about its duty to protect its EEZ ‘exclusively‘ for Filipinos.” While this prima facie appears to satisfy the base level of recognition of Philippine sovereign rights by meeting the constitution’s requirements, the deal still retains the feel of Beijing superiority.

Continuing his turn away from the Philippines’ traditional Western-alignment, Duterte embarked on a 5-day visit to Russia and met with Vladimir Putin earlier this month. In pursuing improved Philippine-Russian relations, which past administrations have ignored to avoid upsetting Washington, Duterte has reversed a position that his country has maintained since the Cold War. The outspoken leader minced no words when rebuffing the country’s former stance, stating that the Philippines’ pro-American foreign policy that relegated Russia to “the margins” of the country’s foreign relations was “an oversight of strategic proportion.” Perhaps in response to the population’s disapproval of his concessions to Beijing, Duterte discussed and agreed to future joint resource exploration in the disputed waters during a meeting with Igor Sechin, CEO of the Russian company Rosneft, which has connections to the Russian government. Vietnam has already begun collaboration with the Russian firm in an attempt to assert their claim to their area of the disputed Sea. Beijing has responded by cautioning against these new partnerships as they themselves attempt to monopolize the waters. For the Philippines, Russia has no claims in the dispute and the contracts recognize the areas as Philippine territory, enabling the country to maintain its sovereignty while enabling the possible exploitation of the waters’ resources. The Philippines, for its part, has already begun to allow foreign firms into the region: permitting the Israeli company Ratio Petroleum Ltd to begin resource exploration in October 2018. Officially, such foreign companies act “as mere service contractors,” enabling the Duterte administration to convey sentiments that they retain control over the situation and new partnerships. It must be noted, however, that Philippine-Russian relations have expanded beyond resource exploration. The two countries have begun collaborations in defence and security, including a number of major arms deals, as well as increased bilateral trades and investments.

Despite increased Philippine-Russian collaboration, the Philippine government has continued to pursue its “memorandum of understanding” for agreements with China regarding resource exploration in the Sea. While such arrangements are not legally-binding, they do serve to signal parties’ readiness to follow through with a contract. Although some preliminary contracts have been drawn up by committees of the two countries, experts remain skeptical of the deals due to China’s refusal to recognize the Philippines’ sovereign claims in the disputed waters.

Adding another wrinkle and complication to the story, Duterte recently asked for the resignation of Pedro Aquino Jr., CEO of the Philippine National Oil Company Exploration Corporation. Although presidential spokesman Salvador Panelo states that the request was a result of a “loss of confidence,” allegations have been made that Aquino prematurely approved an agreement with an unnamed Russian company. In the aftermath of Duterte’s recent Russia trip and meeting with Rosneft executives, perhaps Beijing has continued to retain its influence on Duterte.

Meanwhile, the United States has maintained its military presence in the South China Sea throughout the dispute via their freedom of navigation missions. Moreover, the Trump presidency has improved Philippine-American relations, which Duterte threatened to cut off completely during the Obama administration. Just recently, amidst the revelations of Trump’s many conversations, a phone call between the two presidents has emerged wherein the American executive told his Philippine counterpart that he is doing an “unbelievable job on the drug problem.”

In finding another bull-headed and outspoken personality in the White House, Duterte has returned to having a relatively stable relationship with the United States. At the same time, however, the Philippine president has retained relations with all the powers invested in the issue. Failing to commit to any sphere of influence and refusing to independently assert his country’s sovereign rights, it appears that Duterte has hedged his bets and brought a form of the common domestic practice of political ‘turncoatism‘ to the international stage. Duterte “has pursued a multi-country foreign relations strategy” since being elected to office, in line with his domestic strategy wherein he has maintained relations across the political and social spectrum, including the Philippines’ Muslim rebels. Consequently, Duterte, throughout the dispute, has failed to root his actions in ideology or principle. Rather, he has remained practical and pragmatic in a personalistic search for the supposed best possible outcome for his country.

Incentives remain for the Americans to retain the Philippines as a foothold in Asia Pacific while the United States continues to be a major trading partner of the Philippines. Furthermore, it has been claimed that improved relations with China were merely a strategic, rather than ideological, act caused by the United States’ lack of serious action against China’s construction of artificial islands, their criticisms of Duterte’s war on drugs, and to ensure “that the US does not take its former colony for granted.” Still, Duterte’s anti-Western and anti-imperial rhetoric is hard to overstate and likely played a major role in his shift towards China and Russia.

With Chinese deals failing to provide what was promised, Duterte’s pivot to Russia may be rooted in realizing the shortcomings of constant concessions to Beijing and need to protect Philippine sovereign rights in the disputed waters. Moreover, Manila may believe that Russia can act as a “counterweight” and inhibit any escalation in tensions if, or when, resource exploration begins. Russia, in turn, may be counter-acting the long-standing, substantial US influence in the Philippines while also providing Russian ships access to valuable waterways (the Sea and the Pacific) as well as a friendly port.

Duterte is well aware of the need to be well-connected and supported in this quarrel. The Philippine president has been adamant that any direct military confrontation with China would lead to “a ‘massacre‘ of Philippine troops, but Russia’s pro-Beijing stance throughout the dispute provides little assurance that they would at the very least prevent escalation or discourage Beijing expansionist policies. Realistically, the Philippine’s most reliable military allies in the dispute are likely fellow aggrieved nations, such as Vietnam, or the United States. At the same time, however, the entry of foreign firms into the region may have consequences that are not immediately recognizable. The Philippines, therefore, must insulate itself from any potential disasters and ensure that their contracts do not undermine the country’s future bargaining power.

Well aware of the inevitable result of a direct solo military confrontation with China, Duterte has attempted to explore all directions that would inhibit any escalation of the South China Sea dispute while also providing the country potential outlets of support as insurance against military action. Still, the upcoming American elections may weigh heavy on the issue. Considering Duterte’s mixed relations with the United States, the mutual admiration between Trump and Duterte has been key in improving the countries’ long-time relationship. However, a change in presidency, and thus in personality, may re-ignite Duterte’s anti-American nationalist rhetoric and firmly push the brash president to align the Philippines with China and Russia, as he once proudly stated, robbing the United States of its longtime ally and stronghold in the Pacific.