Ebola and the Politics of Fear 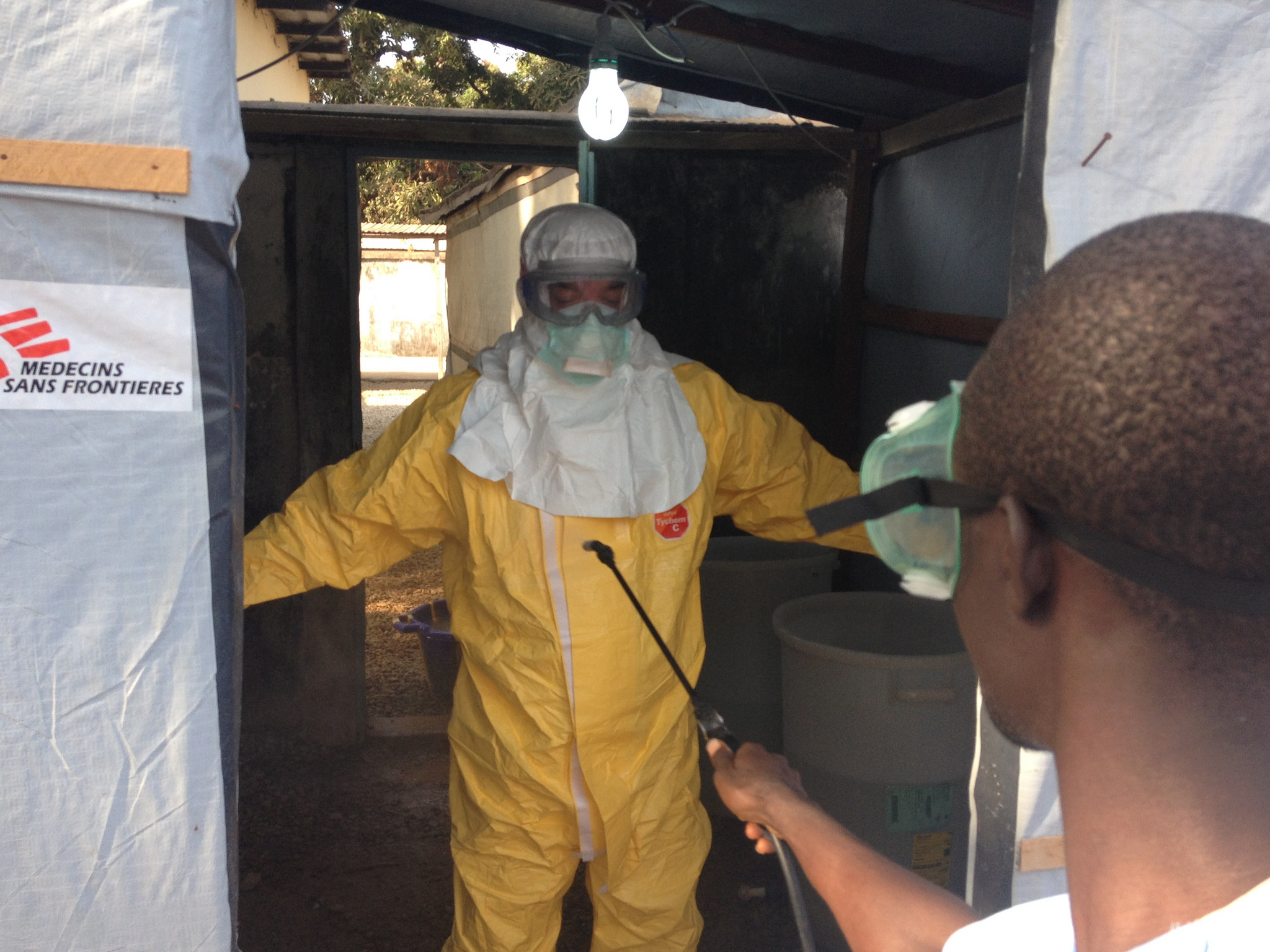 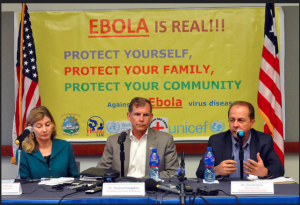 “What has happened recently with Ebola reminds us that in an age of globalization and particularly global trade and travel, what was a problem that was at one time far away from us could arrive at our shores very quickly.”[1] This quote from Prime Minister Stephen Harper echoes the rhetoric of media outlets and politicians all across the Western world – one of fear and confusion. Perhaps this is most apparent when we look at our American counterparts where certain news outlets seem to be sending people and politicians alike into a frenzy. According to an analysis conducted by Time magazine, global mentions of Ebola on Twitter soared from 100 tweets per minute to more than six thousand only minutes after the first Ebola case in America had become public and the media was primed to capitalize on it.[2]

In mid-October, Americans were thwarted with ludicrous headlines after the first Ebola case, Dallas resident Thomas Eric Duncan, was reported to have come to the United States:[3] “Ebola: The ISIS of Biological Agents?” and “Ebola in the air: A nightmare that could happen,” despite the fact that Ebola is only transferred through direct contact with a sick person’s bodily fluids[4]. These headlines were not from any minor unknown news source; in fact the first one is from CNN, a station that many Americans and Canadians alike trust and watch everyday. The headlines however were not the tail end of the inane coverage by CNN. CNN’s Don Lemmon hosted author Dr. Robin Cook, an ophthalmologist (one who specializes in eye diseases), on the show on October 11th. The title of his segment was: “The Man Who Wrote The Book On Ebola,” implying that Cook was an expert on the subject.[5] In fact, Cook is no expert. The book that Lemon refers to in his title segment is the 1987, medical thriller and fiction novel Outbreak, a book about a criminal enterprise that attempts to deliberately spread Ebola (clearly a non-authoritative work on the disease).[6] Cook was even under the impression that the virus i 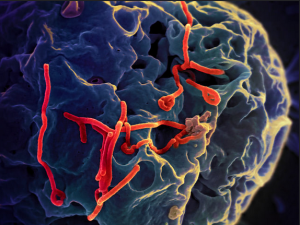 s airborne which, as mentioned earlier, it is not. Fox News (the number one most watched cable news network in America) added to the chorus of diminishing journalistic integrity through host Elisabeth Hasselbeck, making calls to seal off borders and disallow anyone from the affected West African countries into the US amidst counterclaims that this is not a solution but would simply isolate people.[7]

If the population cannot trust the media that we consume every day, who can it trust? The politicians who are supposed to represent us? Apparently not some of them either.

Travel bans have been dubbed as an irrational “non-solution” to the Ebola epidemic by several policy experts and medical professionals. For example, Elhadj As Sy, the head of the Red Cross, calls the disease irrational, claiming that “[i]t creates a lot of fear and extreme panic that sometimes lead to very irrational type of behaviors and measures, like closing borders, cancelling flights, isolating countries etc.”[8] He went on to say that constraints on travel would possibly have negative economic effects, destabilizing regions and disrupting humanitarian services. The head of the Center for Disease Control (CDC) joined Sy in rejecting the travel ban,[9] as did Margaret Chan, director general of the WHO, who stated that during the SARS epidemic, travel bans were used but it is something the organization has never used again.[10]

Despite the heed and countless warnings of medical experts on the issue, some politicians across the Western World have decided that they have an adequate knowledge of the situation at par with those of experts. Suggestions from politicians range from the extreme to the less extreme. Todd Kincannon, Executive Director of the South Carolina Republican Party, recommended through Twitter that “[p]eople with Ebola in the US need to be humanely put down immediately,” and that “[t]he protocol for a positive Ebola test should be immediate humane execution…that will save lives.” A lot of rhetoric from some American politicians are simply ill-founded and based on nothing but ideology.[11] This is also the case with New Jersey Governor Christie, who opted to put nurse Kaci Hickox into quarantine. There was a tense battle of words between the two but ultimately condemnation on the side of Christie by both Nurse Hicox and the American government. They noted that it was doubtful that Christie has sufficient scientific knowledge to make such decisions as to discourage volunteers to go help those in need in Ebola-stricken countries.[12] Hypocrisy is also heard amongst those in the Congress. Senate Minority Leader, Mitch McConnell, says there is a need to listen to health officials and experts but soon changed his mind along with 40 members of Congress who agreed.[13] Fear and unwillingness to listen to experts is now leading the politics of Ebola in America but the situation is not any better in Canada.

The Harper government seems to be dipping a hand into the politics of fear as they have recently suspended the visas for residents of outbreak countries. This ban also affects permanent residents but not Canadians who had traveled from affected West African countries (Liberia, Guinea and Sierra Leone).[14] In true Harperian style, the Canadian government has once again ignored the calls of important international organizations. The move has been denounced by WHO director general Margaret Chan, as well as by international law expert David Fidler. Fidler says this move is a violation of the International Health Regulations (IHR) that Canada actually helped draft after the 2003 SARS outbreak, closing doors to other countries and possibly destroying the IHR.[15] It is important to add that only 1.5 percent of travelers from West Africa come to Canada.[16] In addition, Rona Ambrose, Canadian Minister of Health, also announced recently that Canada will stop sending medical personnel to the region. Cuba has pledged over 400 more doctors and the US has committed 3000 troops to the region.[17]

The Harper government, in addition to various entrepreneurs, also seemed to have been capitalizing on the outbreak. Ottawa continued to auction off stockpiled medical supplies back in September even after the WHO requested the imminent need of it amid the outbreak. In as early as June, Sierra Leone’s ambassador had called for supplies but Health Canada continued to auction off supplies to the highest bidder.[18] Since this request, Ottawa has auctioned off 1.3 million dollars in masks and 209 000 gloves. One set of 500 000 masks was reported to be sold for only $50.[19] Needless to say, the politics of fear are alive and well in Canada.

If politicians in the Western world really want to solve the Ebola crisis, the answer is not isolation, fear and ignorance, but the opposite: unity and solutions based on scientific and medical facts. Rather than focusing all resources on travel bans and quarantines which hurt the already impoverished countries, resources should be used to help these underfunded systems. Stopping the disease at its source is the answer. The only way this can happen is if the affected regions get the medical technology and assistance they require. Each dollar spent in the West on better medical technology would result in a greater benefit if it were invested in countries that are not able to afford better medical technologies. In this sense, it is in fact true to say that if some countries benefit, everyone too stands to benefit. Let us hope that politicians in the West learn that lesson before it becomes too late.

[4] Mataconis, Doug (3 October 2014). “Banning Travel is the Wrong Response to the Ebola Outbreak”, Outside the Beltway. Retrived Oct 28 2014. http://www.outsidethebeltway.com/banning-air-travel-is-the-wrong-response-to-the-ebola-outbreak/