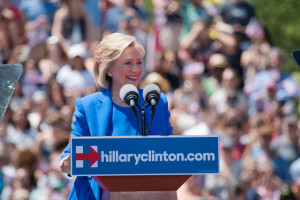 WARNING: This is a long post. Blame the number of

candidates running for President, not me!

It seems like every day that we hear about candidates announcing they are either running for President or withdrawing from the race. With a solid twenty candidates currently in the midst of their campaigns, The Expat Elector is here to clarify who is still in the running and tell you a bit about these folks with whom we will become very familiar over the next year. Without further ado, here are your 2016 United States Presidential candidates – ROLL CALL!

US Senator (Vermont), Bernie Sanders – A self-identified democratic-socialist, Sanders is gaining immense support among marginalized communities and young voters. Sanders serves as one of only two Independent senators in the US Senate though he caucuses with the Democrats.

back decades. Previously seen as the heir apparent to the 2016 Democratic nomination, the 2012 Benghazi attacks and email controversy have hurt her campaign as well as the rise of Bernie Sanders. Yours truly is still planning on voting for Clinton.

Former Governor (Rhode Island), Lincoln Chafee – Son of another former Rhode Island governor, Chafee comes from a long line of New England Republicans but has grown increasingly liberal as the Republican party drives further right, eventually switching parties. Unlike most of his opponents, Chafee is critical of Israel and supports an independent Palestinian state.

Former Governor (Maryland), Martin O’Malley – Having served as both the Mayor of Baltimore and Governor of Maryland, O’Malley is a beloved figure in his home state. His focus on social issues such as same-sex marriage and immigration made him a voice for the underrepresented in Maryland.

Former US Senator (Virginia), Jim Webb – A graduate of the US Naval Academy, Webb served as a decorated Commissioned Officer during the Vietnam war. He has written many books, movies, and articles on military affairs. During his term as Senator he focused on Veterans Affairs, the Marine Corps, and the Iraq War.

Harvard University Professor, Lawrence Lessig – While not considered a forerunner by any means,

Lessig is running a unique campaign. His sole aim as President would be to enact campaign finance reform and electoral reform legislation. After this is achieved, he would resign his power to the Vice-President. I have to admit that this seems like an interesting platform and I would like to hear more from Lessig but he is having trouble being invited to Presidential debates.

Former Neurosurgeon, Dr. Ben Carson – Ben Carson performed the world’s first successful separation of conjoined twins joined at the head. This changed the sphere of neurosurgery forever and turned Carson into a scientific household name. He has never served public office but is well known for his political policy influenced by pious religious beliefs.

Governor (New Jersey), Chris Christie – Christie is seen by many as a moderate Republican among the other Republican Presidential candidates. He came under fire after Hurricane Sandy, which was detrimental to his state, for criticizing former House Speaker John Boehner and commenting on Obama’s aid after the natural disaster.

US Senator (Texas), Ted Cruz – A proponent of the Tea Party, Ted Cruz was born right here in good ole Canada but claims he is able to be President because of his status as a natural-born citizen – some legal experts disagree with this. Cruz, half Cuban on his father’s side, is the first Hispanic-American to

serve as a US Senator in Texas – this could be useful as the Republican Party is working hard to gain the Latino vote.

Former Hewlett-Packard CEO, Carly Fiorina – A lifetime businesswoman involved with companies such as AT&T, Compaq, Hewlett-Packard, and current chair of philanthropic organization Good360. While she has never served in public office, Fiorina ran for a US Senate seat in California in 2010 and served as an advisor to John McCain during his 2008 Presidential bid.

Former Governor (Virginia), Jim Gilmore – While Gilmore was a successful governor, he has not served in public office since the end of his term in 2002. He has, however, served on the Board of Directors of the National Rifle Association which could serve useful during the inevitability of gun-control topics in Presidential debates.

US Senator (South Carolina), Lindsey Graham – As a longtime member of the US Air Force, Graham is a strong supporter of the US military and his voting record shows this. He also known for criticizing the Tea Party movement. Graham is the only candidate thus far who is neither married nor has children.

Former Governor (Arkansas), Mike Huckabee – Huckabee was one of the leading Republicans for the 2008 Presidential campaign but narrowly lost to John McCain and Mitt Romney. He has gained national attention through his Fox News talk show and is well known for his support from Evangelical

Protestants, including the Duggar Family of 19 Kids and Counting and Kim Davis.

Governor (Louisiana), Bobby Jindal – The first ever Indian-American governor, Jindal is a former US Congressman (Louisiana). He studied at Oxford University as a Rhodes Scholar. I really don’t have much more to say about Bobby Jindal.

Governor (Ohio), John Kasich – Kasich is a Republican governor but has had to make certain concessions as he serves in a state with strong labour unions. He is seen as moderate because of these concessions but I don’t know if I agree with this viewpoint. He has, however, supported many aspects of Obamacare unlike the majority of his other Republican colleagues.

Former Governor (New York), George Pataki – I’m going to be honest here, I had never heard of this man before he announced his candidacy in May. Pataki was Governor of New York during the 9/11 attacks and this is sure to matter to voters.

US Senator (Kentucky), Rand Paul – Son of American Libertarian Ron Paul, Rand is a supporter of the Tea Party movement. He is known for taking part in the filibusters that have shut down the federal government and being one of the few Republicans in opposition to portions of the Patriot Act.

US Senator (Florida), Marco Rubio – Rubio is seen as the pretty, young face of the Republican party. He

comes from a Cuban family and served on the Gang of Eight which wrote the first draft of “the immigration bill”. I believe that Rubio will be the eventual Republican nominee for this election and this makes me nervous – he is a likable personality with a beautiful, young family, similar to Obama in 2008.

Former US Senator (Pennsylvania), Rick Santorum – A successful candidate in the 2012 election, Santorum was the runner-up to Mitt Romney for the Republican nomination. He is one of the most socially conservative candidates running to date, referring to himself as a “culture warrior”. Santorum is popular among Evangelical Protestants due to his outspoken and unrelenting pro-life views.

Business Tycoon, Donald Trump – Is a description even necessary? Trump’s divisive comments, business acumen, and often offensive political views have made him the main talking point of the campaign season thus far.

If you made it to the end, I thank you and promise to never post an article this long ever again. Curious as to which candidate you share the most beliefs? Check out I Side With, a quiz to determine where your political values lie in the American system.

With 394 days until the election,