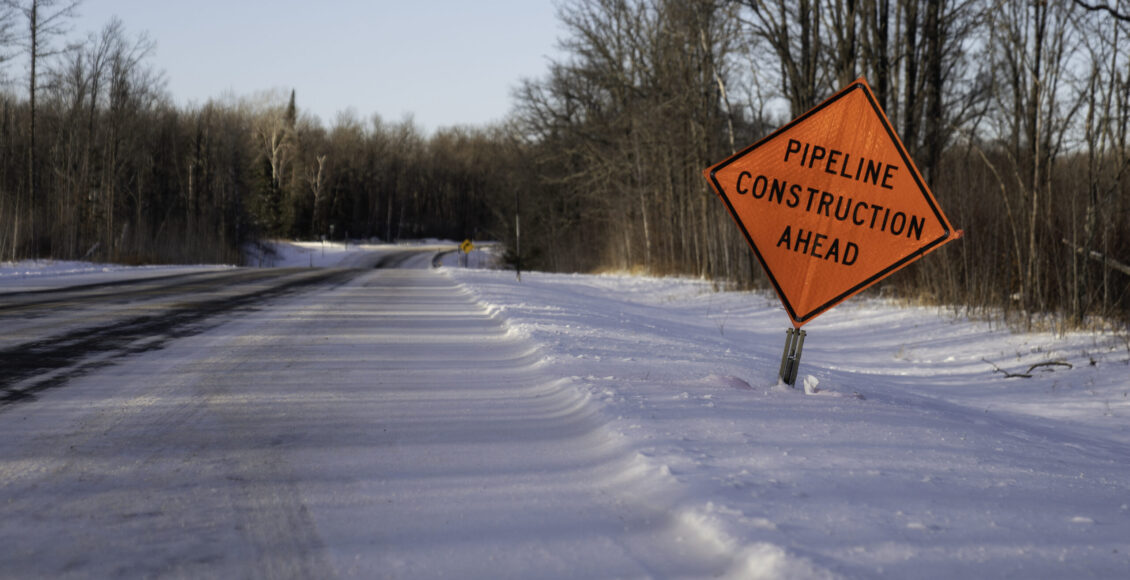 In the past year alone, 13 men, including several Enbridge Line 3 replacement project workers, were arrested in human and sex trafficking stings. What’s more, last month, the company was found to have reimbursed Minnesota police $2.4 million for arresting, surveilling, and blocking protestors of the pipeline, rewarding the suppression of groups opposing the pipeline.

These cases could seem to be perhaps nothing more than common, though deeply unfortunate, examples of exploitation, sexual crime, and a company attempting to brush their faults under the rug — hardly a new phenomenon. Yet, they indicate a far deeper issue involving the oil industry and the Indigenous communities caught up in their projects. The arrests are only the tip of the iceberg for the Indigenous women and girls caught up in the sinister link between oil infrastructure expansion and sexual violence and trafficking. As for Enbridge, the company seems to maintain a largely blind eye towards the effects of their expansion projects on Native territory.

Since its announcement, the 1,765-kilometre pipeline, which started operations on October 1, 2021, has been fiercely opposed by environmental and Indigenous rights groups. This should come as no surprise given Enbridge’s astonishingly poor environmental record. Between 1998 and 2013, the multinational oil transport company was responsible for 1,068 spills totalling 7.4 million gallons of oil. Given this, it’s hardly surprising that the company would be careless and unheeding of their footprint, as it relates to other effects upon the communities in the vicinity of their infrastructure.

While oil infrastructure poses an enormous threat to environmental safety and protection, it also greatly impacts the communities in its vicinity, often underdeveloped Indigenous communities and reservations. The Line 3 replacement project, in particular, passes through an entirely new area of northern Minnesota and is near several reservations and treaty lands belonging to the Ojibwe and other Anishinabe First Nations.

The link between mining and oil extraction industries with sexual violence and trafficking in the United States is neither a recent nor unique phenomenon in oil boom towns worldwide. In the simplest terms, sudden increases of economic activity (i.e., construction) into underdeveloped areas necessarily create an influx of workers, which, from a State Department report, “create[s] a demand for commercial sex.” Much of this illicit sexual activity, violence, and trafficking occur in areas near or around “man camps,” the temporary housing built for the construction workers. Consequently, the construction of man camps in primarily poor, remote, and Indigenous communities goes hand-in-hand with increases in violence, sexual assault, sexually transmitted diseases, prostitution, and illicit drugs.

While these issues impact boom-town Indigenous communities as a whole, it is the Native missing and murdered Indigenous women and girls (MMIWG) that are the greatest victims. At the time of writing, Indigenous women are being murdered at a rate of over ten times the U.S. national average. Over 80 percent of Indigenous people have experienced violence in their lifetime; they are 2.5 times more likely to experience violent crime and twice as likely than other races to experience rape or sexual assault.

On the Fort Berthold reservation, home to the Mandan, Hidatsa, and Arikara (MHA) Nation, the discovery of oil deposits in 2010 caused an oil boom. The effect of the rapid development in the area has subsequently been an alarming increase in sex trafficking of Native women, sexual violence against women and children, and sexual assault on males also increased by a staggering 75 percent. If the Fort Berthold example is any indication of what could continue to happen to Native reservations as companies like Enbridge expand oil infrastructure in Canada and the United States, the outlook is grim.

Further complicating matters are various obstacles to data gathering among cases of MMIWG. To put the lack of data into perspective, there were 5,712 cases of missing or murdered Indigenous American Indian and Alaska Native women and girls in 2016. Of these cases, only 116, or two percent, were logged in the U.S. Department of Justice database.

Many reservations, including Fort Berthold, do not have a publicly available data collection process, making it exceedingly difficult to gather any data related to MMIWG. For other areas, particularly those that Line 3 runs through, remoteness and weak infrastructure also impact data collection or reporting. The Urban Indian Health Institute also determines key barriers to be poor relationships among communities and law enforcement, institutional racism in the media, and the lack of relationships between journalists seeking to cover the issue and Indigenous communities.

The lack of data and data collection methods is a significant problem for identifying and following up on MMIWG cases. However, beyond the need for comprehensive data is the need to prosecute the offenders who take advantage of Indigenous women and girls. Another issue is that tribes and reservation law enforcement do not have civil jurisdiction over non-Indian offenders. According to a law set forth by the 1978 U.S. Supreme Court decision in Oliphant v. Suquamish, tribal officers are unable to arrest and prosecute non-Indian criminal offenders. In reservations like Fort Berthold and now the reservations crossed by the Line 3 project, these criminal offenders are increasingly the same white male oil workers that accompany the industry development in the area.

Moreover, tribal courts do not have the authority to sentence for more than three years, meaning in most cases, a U.S. Attorney assumes the case. In 2011, the US Justice Department prosecuted only 35 percent of all rape cases on Native reservations. When combined with the far greater likelihood of Native women experiencing rape or sexual assault, the result is a massive failure of judicial oversight and a blatant ignorance for the safety of reservation communities.

Given the role that oil industry development played in crime and sexual assault increases on the Fort Berthold reservation, Enbridge’s Line 3 threatens the nearby reservations and communities with the same fate. In February, a sex trafficking sting resulted in the arrest of seven men, two of whom were Line 3 workers. Three months ago, investigators arrested another six men in another human trafficking sting, two of whom were affiliated with Line 3. Although subsequently fired by Enbridge, these workers are only symptoms of a far more profound crisis, one which the company has not taken the proper steps to combat. Enbridge was required to create a trafficking awareness plan and provide training to its employees to receive the initial permit to begin construction on the project. However, this training has been heavily criticized and is said to be insufficient for safeguarding Native women and girls.

From its failures in environmental protection and proper maintenance of its pipelines to paying off police for arresting and surveilling protesters of the Line 3 project, Enbridge has shown contempt and negligence towards its effect on any and all communities crossed by Line 3.

Unfortunately for the Native communities along the pipeline, little can be done to prevent the increasing statistics of MMIWG, crime, and sexual violence unless the federal government intervenes. While providing essential services such as escorting Native women in potential danger, grassroots organizations can do little to change a system that seems, at face value, designed to limit and control First Nations’ sovereignty and power to protect their people.

Featured image: “Pipeline Construction Ahead sign along The Great River Road in Aitkin County, Minnesota” by Lorie Shaull is licensed under CC BY 2.0.