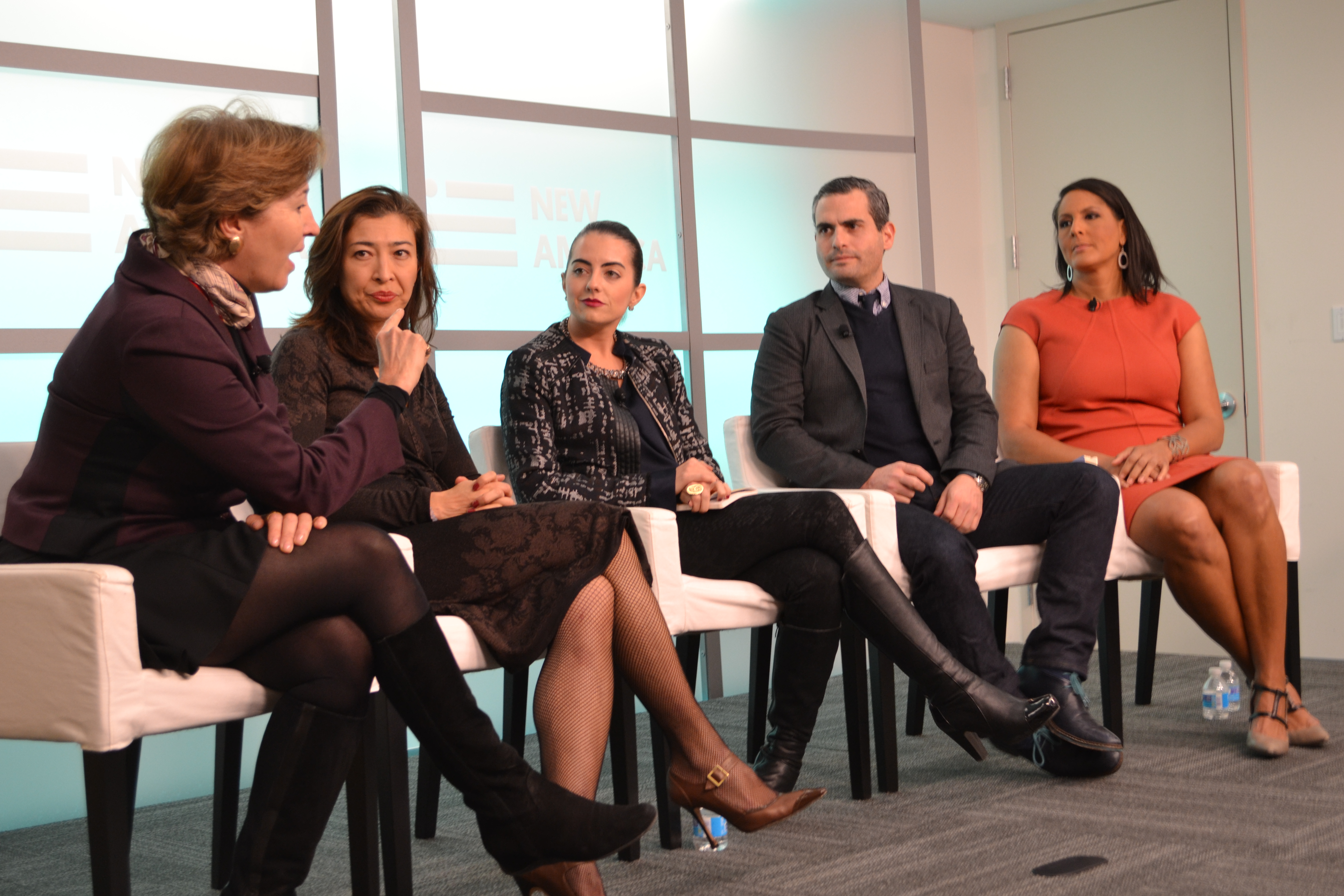 During the Congressional debate over the July 2015 nuclear deal between Iran and the United States, Suzanne Maloney of the Brookings Institution noted that the number of women who provided U.S. policy testimony during the hearings was, ironically, very close to the demographics of Iran’s parliament – 3% female MPs at the time. Of 146 witnesses called to testify on the Iran deal, only 6 were women – a figure that does not accurately reflect female involvement in the negotiations themselves, which Maloney notes was brokered with the help of an unprecedented number of women diplomats. The problem of female visibility in foreign policy circles and its negative impact are well-documented. Instead of focusing on why women’s voices should be amplified, a more illusive question concerns the ‘how.’ There are deep, systemic forces that hamper female advancement in competitive fields, but there are also more immediate solutions to remedy gender imbalance in visibility. Among them is a greater focus on female foreign policy thinkers in media coverage and public policy debate. Increasing the instances where women are cited as experts can challenge current paradigms of visibility and support the careers of women who are competing in a male-dominated field.

Suzanne Maloney’s account of the Iran deal is not merely anecdotal – it speaks to a consistent and systemic reality. Journalist Micah Zenko found that, of the 10 most prominent think tanks with a significant foreign policy focus in Washington, women make up only 21 percent of policy positions. Within government, women account for 12 percent of Senior Department of Defense and 33 percent of senior officials at the State Department. A report from Media Matters for America found that cable news channels book men to weigh in on national security and foreign policy issues at much higher rates than women. For example, women made up only 17 percent of the 1,070 foreign affairs commentators hosted during Fox News’ weekday prime time programming in 2015. CNN and MSNBC had poor female representation during the same time period, with women making up 23 percent and 22 percent of commentators respectively.

Lack of visibility does not impact women homogeneously. Predictably, the challenges faced by white women vying for a seat at the table are fewer than those facing women of colour. It is hard to gather exact statistics for the rates of minority women working in the private sector, but numbers collected by the Office of Personnel Management show that black women and Latina women accounted for 10.3 and 3.4 percent, respectively, of the executive branch of American federal government in 2015. Women make up 44 percent of the federal workforce in general. Working for the agency in charge of U.S. foreign policy within the executive branch, women of colour employed by the Department of State are included in these numbers. It is not hard to imagine how the ratios become smaller as they are divided by agency and seniority.

Unlike the federal government, think tanks are not required to self-report their demographic employment compositions. However, around half of U.S. think tanks, both within any beyond the realm of foreign policy, are university affiliated, with graduate and law programs providing a key pipeline to career tracks in the policy-making world. Low rates of minorities in graduate and law programs indicate that numbers are likely correspondingly low at the end of the pipeline.

Gender parity is not just an issue of fairness; it is also an issue of effective policy and policy analysis. From a human capital perspective, women graduate from higher education at higher rates than men and create a greater diversity of perspectives when they are included in the conversation. In an article for the Atlantic, informed by interviews conducted by Women in International Security, WIIS director Jolynn Shoemaker argues that the existence of a few key women in visible foreign policy roles has not remedied underrepresentation in general. She states that the problem is less acute at lower levels but that “many institutions [lose] women in significant numbers starting at mid-level.” For a variety of reasons, women are less likely to account for higher-up, policy-influencing positions – positions where diversity and female perspectives are most valuable. This has significant repercussions, as studies show that women are more likely than men to consider gender in shaping policy, which is significant given that gender is essential to understanding foreign policy issues like terrorist recruitment strategies, the success of peace negotiations, and transmission of infectious disease.

Identifying the problem and justifying why it matters is easier than implementing effective solutions. As in all competitive fields, there are certain systemic structures that prevent women from advancing within the foreign policy establishment. Anne-Marie Slaughter, the first female director of foreign policy planning at the State Department during the Obama Administration, wrote about the uncomfortable truth that women still can’t “have it all” after she left her position for a more family-friendly career track. The feminist belief that she could be both a mother and maintain such a coveted role was challenged by the simple fact that women are still socialized to feel a primary obligation to family in a way that men are not. Many factors contributed to her decision to leave, but among them was the realization that she could not fulfil her personal maternal imperative and society’s expectations surrounding motherhood in a high-level State Department position. Moreover, work culture that values long hours and inflexible schedules does not support women who still bear a disproportional burden when it comes to child rearing and domestic duties. She points out that the exceptions to the rule, superwomen such as Samantha Power, Susan Rice and Elizabeth Sherwood-Randall, are worthy role models but that their exceptionalism also contributes to the myth that gender disparities are an issue of insufficient commitment. Slaughter argues that women in competitive positions who are devoted to their families do not lack commitment to their field, but that they are disadvantaged by a system that simultaneously expects them to prioritize maternal duties and make extreme sacrifices for professional advancement.

The societal pressures women face can only change gradually over time and speak to a complexity of interrelated factors, but this does not preclude the possibility of more immediate and action-oriented solutions. One way that foreign policy circles can target gender imbalance is by giving women greater career support. Hiring practices and networking opportunities in Washington still tends toward “unconscious cronyism,” where men are more likely to consider men for research and fellowship positions, panel discussions and media commentary. This in turn has a huge impact on visibility and career trajectories, where women are both given fewer opportunities to advance and are consistently cited less as experts. As Heather Hurlburt of the National Security Network writes, “we must be honest that the core problem is that many men still turn first to other men… if you don’t want to call it sexism, it is at least a bias toward comfort with what’s familiar. That habit is going to get us all in trouble in a globalizing, unfamiliar world, and it deserves to be challenged.”

Within this work culture, it is essential to give women the opportunity to promote their expertise. Foreign Policy Interrupted, the brainchild of Lauren Bohnn of the GroundTruth Project and Elmira Bayrasli of the New America Foundation, is an organization that supports mid-career female professionals through a fellowship program that provides mentoring partnership opportunities and media training. Foreign Policy Interrupted is working to change the paradigm where editors, news channels and think tanks under pressure to come up with a steady supply of foreign policy experts overwhelmingly rely on male voices. By giving women skills to market their expertise and providing rosters of qualified women, Foreign Policy Interrupted connects women to influential circles and makes it more difficult for media outlets and think tanks to justify all male commentators. Although not focused on foreign policy, the Women’s Media Center is another network that has programs to train women at different career levels to become media spokeswomen in their respective career field. These endeavours and others are an integral part of changing the demographics of the foreign policy establishment and by extension, how effective and impactful policymaking and policy analysis will be. Solutions focused on the private sector would likely have a positive impact on gender representation in the public sector, as well. The boundaries between foreign policy careers in government and in civil society organizations are more porous than the gendered barriers that currently exist in achieving high-level policy positions.

Another necessary shift involves social attitudes surrounding the gender imbalance. On the one hand, it is imperative that the foreign policy community, men included, push back against the norm that gives disproportional primacy to male voices. Foreign Policy’s David Rothkopf is one of many foreign policy experts who have publicly vowed to decline invitations to panel discussions that do not feature any female speakers. Women too must continue to demand for a change in the status quo, particularly in regards to promoting change that focuses on intersectional representation. Solutions that fail to recognize that there are hierarchies inherent in “female” representation are not truly solutions. Efforts to support female careers should give primacy to increasing the numbers of minority women who participate in foreign policy. The fact that female input is valued more today than in previous decades does not undermine the push for greater equality. Within an increasingly-complex foreign and security policy landscape, demands for change are as relevant as ever.