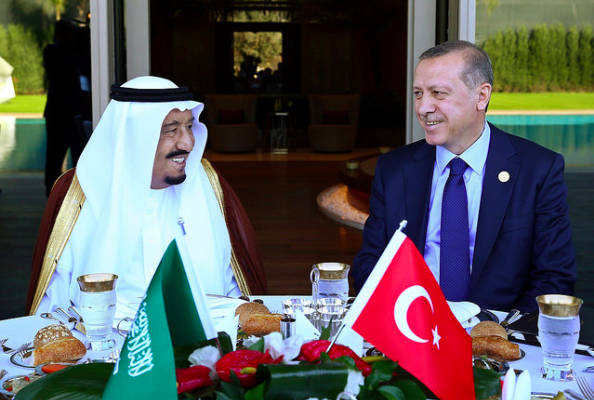 As the new year unfolds, Turkey—under the leadership of Recep Tayyip Erdogan—will continue to hold an increasingly significant role within European, Middle Eastern and global affairs. Since the monumental AKP victory in the Fall of 2015, Erdogan has artfully navigated opposition forces and has pushed his regime into a period of great domestic and regional strength. Although the Turkish populace has yet to experience the political and constitutional revolution he has promised within the domestic sphere, it is evident that President Erdogan intends to spearhead a diplomatic revolution of sorts, with Turkey ultimately serving as the linchpin of Middle Eastern political and military affairs.

Since his ascension to prominence in 2003 as Prime Minister, now-President Erdogan has envisioned the resurgence of Ottoman hegemony under his guidance. While this declaration is frequently dismissed as balderdash by Western leaders, Erdogan’s vision of a neo-Ottoman sphere of influence no longer appears as fantastical or foolish as once perceived. Indeed, given the volatile nature of the international political environment at the outset of 2016 and Turkey’s increasing assertiveness on the regional stage, the fulfillment of Erdogan’s “dream” has never been closer to fruition. In 2016, President Erdogan intends to awaken the international community to Turkey’s reclaimed geopolitical significance by capitalizing on the social and political instability that has ravaged Turkey’s neighborhood, solidifying Turkey’s critical role in regional security dynamics, strengthening diplomatic relations with key Sunni allies and continuing to deflect Russian attempts to undermine the diffusion of Turkish influence. With the rise of “Sultan” Recep, the Middle East—already the world’s most unstable region and home to a litany of intractable conflicts—is on the verge of evolving into a more complex system, although many would have doubted this possibility given developments of 2015.

In the days immediately following the downing of a Russian plane along the Syrian border (or perhaps within Turkish airspace), Moscow imposed a series of economic sanctions on Turkey, attempting to cripple its economy, to isolate the current regime and to push Erdogan towards repentance for what the Kremlin perceives as repeated displays of aggression. The sanctions, including a ban on the importation of Turkish agricultural and consumer goods, charter flights, and the employment of Turkish citizens in Russia, are estimated to damage the Turkish economy by 9 billion USD in 2016, merely .4% of its projected GDP. Evidently, Russia’s sanctions came as a mere slap on the hand for the Erdogan regime, lacking the social and economic repercussions intended by Putin. Perhaps

Russian retribution for Erdogan’s “stab in the back” was conducted too swiftly, without the careful consideration typically characteristic of Putin’s foreign policy. Russia’s anti-Turkish campaign has only deepened in recent months to include the harassment and alienation of Turkish nationals residing in Russia, the expulsion of Turkish students from Russian universities, a temporary pause in visa processing and immigration assistance for Turks, as well as new restrictions on Russian travel to Turkey. The boycott of Turkish consumer and agricultural goods, vacations and textiles has evolved into a patriotic duty for many Russians. But Moscow’s economic tactics have begun to hinder Russian progress more so than Turkish, thus jeopardizing Russian business ventures and halting bilateral trade that proved more beneficial to Russian producers and consumers than their Turkish counterparts. Chief Kremlin advisers have admitted to this Russian miscalculation, yet no steps have been taken to salvage the crumbling relationship. Additionally, the economic consequences of Russia’s decision to pivot away from its relationship with Turkey will only fester as the economy of its largest trade partner, China, continues to falter.

Putin asserts Turks must claim collective responsibility and express “regret” the actions of the Turkish military. Additionally, Putin has declared President Erdogan an “accomplice of ISIL”, alleging that Ankara had secretly purchased oil supplied by the Islamic State and thus undermined the efforts of revolutionary forces, the Assad regime and Western powers to combat the territorial and ideological spread of the terrorist organization. Although Moscow claims it holds “irrefutable evidence” that exposes Erdogan’s subversive tactics, the Kremlin’s accusations appear to be damaging Russia’s political reputation more than the credibility of the Erdogan regime. As evidence of such, Turkey’s unannounced incursion into northern Iraq to combat ISIL last month drew international attention for Erdogan’s lack of consideration for Iraqi autonomy, not as a counter to Russia’s prior allegations. The combination of Russia’s soft and hard power approaches to limiting Turkish influence have produced nothing than merely a diplomatic spat between Putin and Erdogan, souring a relationship that promised to evolve into a mutually beneficial alliance.

As relations with Russia turn cold, Erdogan has looked to secure ties with Turkey’s neighbors in the Middle East. In an effort to secure Turkish regional supremacy, Erdogan has pursued the harmonization of Turkish security interests, concerns and geopolitical aspirations with two of the regions’

leading powers: Saudi Arabia and Israel. In late December, following a short period of deliberation, Turkey entered a Saudi-led military alliance of 34 Sunni nations, thus joining the Sunni “strategic cooperation council”. The strength of the Saudi coalition and the expanse of the alliance system has been deemed as “significant” by many policymakers. In contrast, the  coalition’s potential to foment tension in the region has discouraged states such as Pakistan from joining, weary of the possibility of retribution from its neighbors and magnification  of any future regional conflict. The coalition, supported by the wealth of its Saudi leadership and Gulf members, is to strengthen considerably through this recent pledge of Turkish military support. Turkey is a significant addition to the coalition given that other members, excluding perhaps Egypt, lack the capability to provide extensive military force (by number) in a time of conflict. Turkish admission to the Saudi coalition comes during a tense period for the region’s Sunni-Shia relations, as Saudi military intervention against a coalition of Iranian-backed Houthi rebels in Yemen has matured into a bitter proxy conflict between the Kingdom and the Islamic Republic. Erdogan and Saudi King Salman have agreed to increase cooperation on regional issues, with special attention directed towards the Syrian Civil War, where the Saudis and Turks both seek the removal of the Russian- and Iranian-backed Assad regime. Saudi and Iranian proxy warfare in Yemen and the recent American-led Iranian Nuclear Agreement are also among the primary concerns of the coalition. It is no coincidence that Erdogan has solidified Turkish ties with the Saudi Crown following Russian alienation, thus extending the Russia-Iran-Assad opposition to Turkey-Saudi-NATO cooperation in Syria into an extended treaty-backed system of military alliance. As Erdogan and Putin further distance the interests of their states from one another, Erdogan has evidently calculated the importance of counter-balancing potential opposition forces. It will be interesting to observe the regional effects—if any — of Turkey’s newfound Saudi alliance as relations between Saudi Arabia and Iran deteriorate further following Saudi’s recent execution of a dissident Shiite cleric.

Recent weeks have also seen President Erdogan seeking to restore Turkey’s frayed ties with Israel. Not coincidentally, Turkey’s renewed drive to regenerate its relationship with Israel has come at the same time as the strengthened alliance with Saudi Arabia, and appears to be constructed with similar considerations in mind. In the past, Erdogan and the Turkish government have promoted an anti-Israeli, anti-Semitic rhetoric, with diplomatic relations often inflamed by tension regarding the question of Palestine. But in a statement released on January 2nd, following his visit to King Salman, Erdogan revealed “Israel is in need of a country like Turkey..we have to admit that we also need Israel…this is a fact of the region.” The rapprochement with Israel has come as the result of protracted negotiations begun in mid-2015, propelled largely by the signing of the Iranian Nuclear agreement.

President Erdogan and Prime Minister Netanyahu both evidently realize the growing importance of each other’s diplomatic support, despite fundamental differences regarding regional and humanitarian concerns. A strengthened relationship between two of the region’s major non-Arab powers works towards constructing a stable equilibrium amongst the states of the Middle East and serves as a powerful deterrent, potentially curbing the simmering animosity between rival states and interests. Renewed Turkish-Israeli relations also serve as a clear nod to the West and Turkey’s NATO allies, thus confirming the ever-increasing importance of Turkey’s role as a bridge between Western and Eastern political interests. Erdogan appears to have forged Turkey’s path to regional prominence and military might. The developments of 2016 will reveal if the President’s efforts will harness the power he craves.

Candar, Cengiz. “Has Turkey’s regional power grab come to an end?” Al Monitor: The Pulse of the Middle East. http://www.al-monitor.com/pulse/originals/2016/01/turkey-saudi-arabia-ankara-try-reclaim-regional-supremacy.html#ixzz3wsi7aR14.