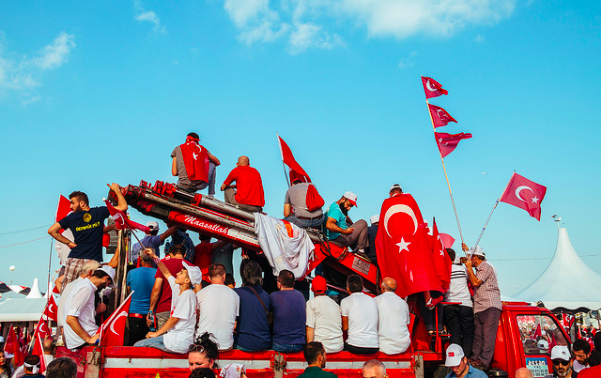 Whilst the West has been caught in a whirl of angst and apprehension following the results of the American election, arguably more concerning changes to the international balance of power have been unfolding in the Near East. In his most recent diatribe, Turkish President Recep Tayyip Erdogan has tweaked his narrative of victimization to include a new antagonist: the European Union. This includes, by extension, the United States.

Recent developments in Strasbourg have catalyzed Erdogan’s simmering indignation. Following a vote held on November 24, the European Parliament motioned to suspend membership talks with Turkey. As underscored in the document: “The European Parliament… strongly condemns the disproportionate repressive measures taken in Turkey since the failed military coup attempt in July.” According to President of the European Commission, Jean-Claude Junker, the vote has “no practical effect” beyond protest, but “will produce effects in the capitals.” Indeed, a suspension in talks would have to be decided by member states, not lawmakers. Among Turkish and European audiences alike, the vote was widely perceived as controversial: a source of unnecessary friction between Europe and its unlikely yet vital partner. To Erdogan, it marked a confirmation of the Western “betrayal” he has sensed behind the lack of international solidarity displayed following July’s events.

Since July’s botched putsch, Turkey has been in a state of emergency: an uncertain atmosphere of heightened monitoring and state-sponsored persecution designed to “recover” Turkey from the subversive activity of “the deep-state Gulenists.” This process, Erodgan claims, is needed to “cleanse” Turkish society of the “Gulen virus.” In many ways, Erdogan’s strategy has fomented the latest wave of nationalism, helping him to revive a cult of personality that had been damaged following his AK Party’s embarrassing election showing in 2015. However, it is clear that Erdogan’s heavy-handed approach is designed to safeguard neither democracy nor the liberal values that have earned the state international recognition.

In light of the seriousness of the post-coup situation, the European community understood that unprecedented measures were required to restore order and renew the public’s faith in the stability of the Turkish state. However, Erdogan has proceeded to damage Turkey’s already abysmal human rights record and undermine the rule of law.  At the root of this latest controversy is new anti-terrorism legislation that has expanded to vaguely include all perceived threats to the Turkish state, including the Gulenist “terrorist network”. The Gulenists are formally a benign movement centred upon service, piety and nationalism. In recent months, however, nearly 125,000 state employees (from bureaucrats to academics) have been arbitrarily detained or dismissed for alleged ties to Gulen. Those targeted have ranged from military personnel intimately linked with the planning of the coup to those who downloaded a supposedly subversive app on their smartphones. An astonishing 100,000 people have been accused and/or detained for their alleged connections to the botched coup in July.

Freedom of speech and of the press have been further curbed through measures deemed “draconian” by the United Nations Special Rapporteur on the Rights to Freedom of Opinion and Expression. Since the summer, nearly 170 media outlets and print journals have been forcibly closed, with a recent uptick in the number of journalist jailed or forced into exile. NATO has even divulged that Turkish military personnel have been requesting asylum within other member-states. Erdogan claims that the process is lawful: state “crisis centres” have cropped-up across the country to create the impression that the accused can contest charges and gain access to impartial legal counsel. However, nearly 3,800 members of the judiciary have been dismissed, and have since replaced with loyal appointees. Perhaps the gravest point of concern for Europe has been Erdogan’s plans to reinstate capital punishment in order to end the Gulenist ‘threat’ once and for all. Turkey abolished the death penalty in 2004 in its effort to qualify for EU membership. Today, Erdogan and the Turkish public appear indifferent to this limitation. Crowds often chant for executions at rallies and AKP events.

There is a morbid symbolism to the matter which captures the fragile state of relations between Turkey and the West. Since 2006, Turkey has sought admission to the European Union, a process that has generally been viewed as “humorous” but necessary in order to maintain close economic, diplomatic and political linkages between east and west. Indeed, Turkey has served as the keystone of the EU’s recent “Joint Action Plan”, designed to curb the flow of migrants into the porous Schengen zone. Turkey’s commitment to stem the flow of refugees was contingent on a promise by the EU to expedite Turkey’s admission process, as well as the prospect of visa-free travel for Turkish nationals within the EU. The EU has since issued a progress report on accession talks with Turkey, however, highlighting its “serious concerns” regarding Erdogan’s heavy-handedness, calling the president’s tactics “an attack on democracy” and inexcusable to European audiences. The report this year marks a dramatic shift from its usual chastisement without any substantive consequences or remedies. It is clear that in 2016, the EU has sought to confront – and perhaps deter – Erdogan’s pivot towards authoritarianism.

Although non-binding, it is difficult not to interpret the Parliament’s vote as an attempt to renege on previous obligations. It is likely a signal for EU leadership to consider such a shift. Unfortunately, the vote comes  after a series of heated exchanges following the issuance of the EU’s annual report, a document both Erdogan and Prime Minister Yildirim have dismissed as “vileness.”  Although he has issued similar threats before, Erdogan has declared “we [Turkey] are the ones who feed 3.5 million refugees in this country. You have betrayed your promises…if you go any further, those border gates will be opened.” It is clear to officials in Brussels that their experiment in realpolitik was fragile from the start. Nevertheless, its collapse would be self-induced, caused by diplomatic intransigence or unnecessary hostility with Turkey. Indeed, it is not in the European interest to renew the humanitarian catastrophe that threatened European unity throughout 2015.

The EU should also note that their bloc is not the only game in town. Indeed, the more attractive organization for Turkey appears to be the Shanghai Cooperation Organization: a political, economic and security collective of Central and East Asian states led by China and Russia. Since the early fall, Erdogan has been in talks with both the Russian and Chinese governments regarding admission. This development comes following reconciliation between Putin and Erdogan after 2015’s tensions over the war in Syria. Although still in its nascent stages, the EU should interpret Turkish interest in the SCO as an threar to the international status quo. The West, particularly the NATO bloc, has relied on partnership with Turkey to secure its interests and to counterbalance its rivals’ interests in the Near East. At present, two revisionist states appear poised to capitalize on Turkish estrangement from the West. Indeed, Erdogan is looking towards a new initiative in which Turkey’s geostrategic advantages will be considered over its humanitarian pitfalls. A symbolic rejection of Turkish EU membership is ill-timed, unwarranted and destructive. Indeed, leaders like Erdogan perceive such actions as personal attacks, not as prompts to revise their stances on state-society relations. The European Parliament should weigh its nearsighted condemnations against the long-term thinking of such a cold political calculator. Non-binding motions and empty rhetoric have no place in an arena where the Turkish leadership is willing to defect, with Putin and Xi waiting to fill any vacuum formed by ineptitude.