To Euro or Not to Euro? For Croatia, the Wise Choice is No 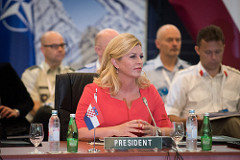 The road to the Euro remains a long one for Croatia despite the fact that the Croatian National Bank (CNB), intends to replace the Croatian kuna with Europe’s shared currency by 2020. However, it very well may not be the best path for Croatia to take. With the European political climate riding into 2017 with an anti-establishment wave following the outcomes of the U.S Presidential Election and the Brexit vote, it is a considerable naiveté on the part of both Croatian Prime Minister Andrej Plenković and CNB Governor Boris Vujčić to suggest such a move. Surely they must recognize that after having been accepted into the Union, adopting its currency may be one step too far in times of great uncertainty.

It’s no secret that the Euro crisis is one of, if not the biggest setback facing Europe since the Great Recession of 2007-08. Since it was implemented in 1999, many countries, have struggled to keep up with the standards set by others as there has always been a real dichotomy in the size and strength of Europe’s economies. Historically, Europe’s Mediterranean and post-Communist agriculturally-centered nations have found it difficult to keep up with the titans of industry in Britain, Germany, and to some extent France.

Moving back into the late 2000s, Europe’s debt crisis saw banks fail, hitting countries with weak economies and political turmoil the hardest. Greece, Slovenia, and Spain, all located in Southern Europe, were not able to devalue the Euro because of the rules with respect to it being a multi-national currency. As a result, deficits continued to grow, competitiveness among industries dramatically decreased, and unemployment exploded due to price inflation. Compounded with this for countries like Greece and Italy was structural weaknesses in their economies due to exceedingly high levels of public debt that were improperly accounted for when the Eurozone permitted them to adopt the Euro. What ensued were years of third-party bank bailouts spearheaded by Germany to try and keep the European Union from collapsing. With such a mess as this, it is interesting that talk to abolish the Euro has not yet garnered as much attention as it should have ten years on. For the sake of understanding Croatia’s route to its adoption of the Euro, let’s look at the rules outlined for the process in the Treaty of Maastricht (1992).

As the current standards exist, a European nation that wishes to adopt the Euro must abide by the Euro convergence criteria found in that treaty. These include: (1) not exceeding the inflation levels of Europe’s harmonized index of consumer prices, (2) not exceeding the three percent government budget deficit ratio, (3) having a government debt-to-GDP ration that does not exceed 60%, (4) having exchange rate stability which includes not devaluing their currency and not having “severe tensions” over the last two years by participating in the Exchange Rate Mechanism II (ERM II) for that time, and (5) steady long-term interest rates not exceeding two percentage points from the Euro-wide rate. For Croatia, the last steps are reducing the deficit and debt ratios found in steps 2 and 3. This would allow it to participate in ERM II for two years which would then place it in adoption status. By no means will this be an easy task as the public debt ratio is at an exorbitant eighty-five percent as of January 2017, putting it twenty-five percent off the mark. However, President Kolinda Grabar-Kitarović is confident that this can all be accomplished within the next three years with the Euro in full circulation by 2020. This may be a case of excitement clouding rational judgment however.

Croatia just began its E.U experience in 2013 and it is mind-boggling as to why its government is seeking to make itself a candidate for a currency that is almost certain to either be removed within the next ten years or lost most of its value in the case of countries that “exit” as Britain back in June. Having witnessed the chaos of bailouts and debt previously mentioned that afflicted its Euro-wielding neighbors for the last decade, the Croatian government should recognize this as a sign that it must retain control over its own currency rather than adopting the Euro and being at the mercy of its fluctuation.

At the same time it is surprising that President Kolinda Grabar-Kitarović, Plenković, and Vujčić are not taking into account the size, strength, and structure of their own economy and recognizing how similar it is to Greece’s. The Croatian economy is in the lower half of the E.U’s economies with government deficit and debt-to-GDP ratios that are above European standards. Also, it has the third highest unemployment rate in Europe after only Greece and Spain, which would make it nearly impossible for Croatia to sustain the standards found in the Treaty of Maastricht even if it were able to achieve them in a few years time.

After having witnessed Brexit, a possible “Grexit”, and right-wing parties in France and the Netherlands pushing for their withdrawal as well, the anti-establishment, “Euroscpetic” movement taking place across the continent is a sign that the E.U and its institutions could very soon lose their political legitimacy. Despite all of this going on around her, President Grabar-Kitarović continues to reiterate what has been Croatia’s goal since the end of the Balkan wars which is to continue modernizing the country and re-integrate Croatia into the European community, something that it has struggled to do since the dissolution of Yugoslavia in the early 1990s.

The Euro according to the President, who does not lack any international experience having been NATO’s assistant secretary-general for public diplomacy from 2011 to 2014, is a very important step in that process. In her opinion, the Euro would create better conditions for businesses to thrive and for Croatia’s abundant natural resources in oil and hydropower to be exported because it would boost competition. For Kitarović, Croatia’s largest dilemma is not the education levels of its people or their skills and work ethic, but the bloated public sector which has led to monopolization of private corporations and inefficient management with poor regulatory implementation. By utilizing the Euro, Croatians would have no choice but to meet the standards of Europe’s strongest economies and this, Kitarović believes, is what will allow the private industry to develop, reduce the burden on the government, and have Croatia businesses functioning at their top level.

As mentioned, it is not so much a question of whether Croatia can meet the standards by 2020, but one of the future ramifications that may come of further “handcuffing” the nation to a European Union that may not last for much longer. For Croatia, its best bet is to hold off on the Euro for a few years, wait and see where the wave of anti-establishment politics (led by the Trump election) takes the world, and to enjoy all of the benefits that its citizens obtained when it joined the E.U. One thing is certain in politics, hasty decisions do not come without costs. Being a spectator however, has always been free of charge.