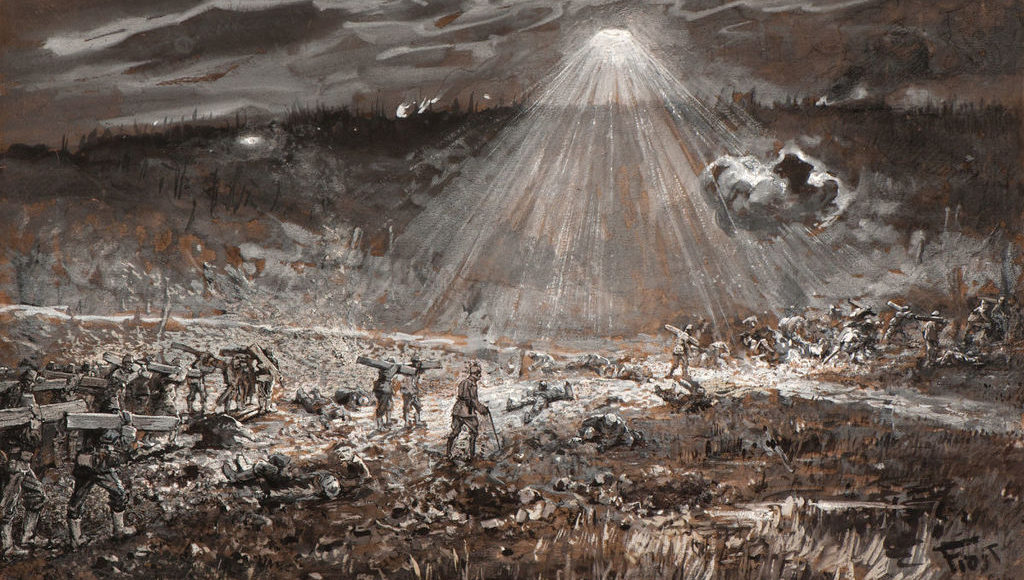 World War I officially concluded on November 11th, 1918 at 11:00 am, only ending after four bloody years of fighting and 16 million dead. It had started in 1914, and pitted the Central Powers, the German and Austro-Hungarian Empires, against the Allies: Britain, France, the Russian Empire, Belgium, and eventually the United States. This year is the centennial of World War I’s conclusion. United States President Woodrow Wilson, in his 14 Points, framed the goal of World War I as being the spread of liberal democracy, although many simply signed up to fight in hope of a better future for their nations. Therefore, on the centenary of the war, it is worth reflecting on the progress gained in a pursuit of a better future and liberal democracy. It is also worth reflecting that Europe in 2018, as in 1918, stands at a crossroads point in her history and seems to be repeating the mistakes of the post-1918 era.

In 1914, Central and Eastern Europe was under the control of three Empires: Russian, German and Austro-Hungarian. Each of these empires contained a variety of ethnic minorities who desired their own state, as each was oppressed by their ruling empire. For example, within the Austro-Hungarian Empire, Hungary, which was self-governing in its domestic affairs, implemented a policy of Magyarization, the forced assimilation of her minorities to Hungarian culture.

World War I brought about the fragmentation of these empires and the chance for the ethnic minorities to establish their own states. The Allies supported such efforts. Point 10 of the 14 Points stated that the minorities of the Austro-Hungarian Empire should be given “the freest opportunity to autonomous development”. The various peace treaties which concluded World War I granted the ethnic minorities of Central and Eastern Europe their own states: for example, Czechoslovakia for the Czechs and Slovaks, and Poland for the Poles. Although Central and Eastern Europe has since undergone dramatic change, with its occupation by the USSR and the collapse of Yugoslavia, the right of self-determination has remained untouched after its establishment in 1918. Indeed, the states of Central and Eastern Europe have been accepted by the older European nations as an integral part of Europe, with their accession to the European Union in 2004.

Many of the newly independent Central and Eastern European nations fell to authoritarianism shortly after their independence. This was the result of a power struggle between social classes: post-empire, Hungary transitioned from parliamentary rule to a Communist one-party state, which was then overthrown by a coup d’état led by Admiral Horthy and supported by the upper class. Horthy designed the electoral system to the legislature to favor the Unity party which supported him. This allowed the Unity Party to achieve super-majorities with only a plurality of the vote. Poland’s fledgling parliamentary democracy similarly fell to a military dictatorship, shortly after independence.

It seems that recent events in Central and Eastern Europe echo this history. After a landslide victory in the 2010 Hungarian election, the right-wing party Fidesz introduced a similar electoral law and has continued to win super-majorities since. In addition, Fidesz introduced a new constitution which, among other illiberal measures, lowered the retirement age for judges, thereby allowing for the appointment of new Fidesz-friendly judges. This move has been copied this year by the right-wing Law and Order party in Poland. Hungary has, once again along with Poland, slid into authoritarianism, or what Hungary’s leader has termed “illiberal democracy“. In 1918, the victorious Allies did not provide any assistance to the newly independent states in their transition to self-rule. While the European Union is seeking to prevent Central Europe’s slide into authoritarianism, it has so far acted timidly. It seems that once again, Eastern and Central Europe is about to be lost to authoritarianism. It also seems that European politics as a whole is undergoing a similar transformation.

World War I brought about political realignment in the politics of both the victorious Allies and Germany. Prewar, imperial Germany’s political divide was between the monarchical right-wing parties and anti-monarchical left-wing parties. After World War I, with the establishment of the Weimar Republic, politics became based on support for or opposition to the Weimar Republic. The pro-republic parties included the Social Democrats and the Centre Party, while the anti-republic parties included the Nazi party and the Communists. Anti-democratic parties flourished in France, where the Communist Party held the balance of power in the legislature, and elsewhere in Europe. It is a dangerous position for any country when its politics is divided in terms of support or opposition to democracy. As a result, any crisis which shakes the electorate’s faith in the pro-democracy parties would then lead to a rise in support for the anti-democratic parties, untarnished by the crisis, and allow them to hold the balance of power. The pro-Weimar coalition was torn apart by the Wall Street Crash; as a result, the Nazis were brought into the governing coalition. This allowed them to seize power and dismantle democracy.

Europe’s politics at the turn of the millennium was based on the right-left divide. However, two events have occurred which have brought about a political realignment to “open vs. closed”, i.e. parties which promote or oppose globalization. The first was the 2008 financial crisis, which triggered a recession. The austerity measures which Europe’s governments implemented deeply hurt the living standards of many citizens. The second was the 2015 migration crisis, when millions of people fleeing war in the Middle East and Africa sought to enter Europe, creating the perception among many that Europe was under siege. It was these events that led to the rise of the “Closed” parties, which sought to protect Europe from events outside its borders. Examples include the populist coalition in Italy, between the Five Star Movement and the League, and Alternative for Germany (AfD) becoming the official opposition in the German Parliament.

While democracy is not threatened as it was in the 1930s, the new alignment between “open” and “closed” politics in a dangerous position to be in. Although globalization has brought about hardship for many, it has also brought massive benefits to Europe, leading to rising living standards and increased ties between the nations. The reversal of globalization, which these closed parties seek to achieve, would risk all of these gains and make Europe a poorer place. 1918 brought about a realignment and eventually World War II; 2018 sees Europe stand at a crossroads, at which either the old parties can rise to the challenge of reworking globalization, or Europe can once again fall into nationalism.

Point 14 of the 14 Points called for the establishment of “a general association of nations” for “the purpose of affording mutual guarantees of political independence and territorial integrity” to states, which led to the establishment of the League of Nations in 1920. However, the United States chose not to join the League, due to the fear of being dragged into another European war. The loss of the United States meant that the League would have significantly less military, economic, and political power to expend in its goal of achieving peace. The League did have some successes that are often overlooked, such as preventing war between Finland and Sweden over the Åland Islands in 1920.

However, the League’s failures were many and significant. In the Spanish Civil War of 1936-39, which pitted the Republicans against Franco’s fascists, the Germans and Italians deployed significant resources to assist Franco, pushing him to victory. The most significant lesson of the war was that it demonstrated to Hitler and Mussolini that the League was unwilling and unable to act against their foreign military adventures.  Germany continued unhindered expansion until 1939, when Britain and France declared war after Germany invaded Poland. Credible action by the League in the Spanish Civil War could have undermined Hitler’s determination to expand.

The regional successor to the League of Nations came in 1952, when the European Coal and Steel Community (ECSC) was created between Belgium, the Netherlands, Luxembourg, Italy, Germany, and France. Its goal was to centralize the production of coal and steel, two raw materials essential for war, and thus ensure that no country had enough of these materials to make war alone. The ECSC was the first step in the process that would lead to the formation of the European Union (EU) in 1992. The ECSC, and later the EU through its Single Market project, hoped that economic interdependence between nations would prevent any further European wars, as it would be too economically costly to the aggressor. In this aim, the EU has been very successful, as there has not been a major European war since 1945. Greater still, the EU brought together France and Germany, two nations which had fought three wars between 1871 and 1945, making them the rock upon which the European project is built.

It is clear, however, that the EU today is in crisis, due to realignment of politics across Europe, the exit of the United Kingdom, and the increasingly authoritarian tendencies of its Eastern European members. However, the two main drivers of European progress, France and Germany, currently lack the political capital to drive the project forward: German Chancellor Angela Merkel, following electoral setbacks, has announced she will be stepping down as her party’s leader; French President Emmanuel Macron is increasingly unpopular due to gaffes and his reform programme. In 1914, the absence of the United States from the League undermined its effectiveness, and it appears that, with the key drivers of the European project wounded, the EU is about to stagnate.

The sacrifice of the soldiers of World War I freed ethnic minorities, secured European peace, and set European integration in motion, thus allowing the nations of Europe to achieve a better future and helping the spread of liberal democracy. However, it also clear that Europe has not progressed onwards from 1918 as much as hoped: European integration has now stagnated, democracy across Central and Eastern Europe is increasingly at risk, and there is a resurgence in nationalism across European politics. In this centennial year of the conclusion of World War I, Europe should remember the sacrifice of her soldiers and the progress that this sacrifice won. Yet, the greater act of remembrance would be, at this crossroads point in European history, not to repeat the mistakes of the past and to continue to walk the path to progress that the troops of World War I died to achieve.