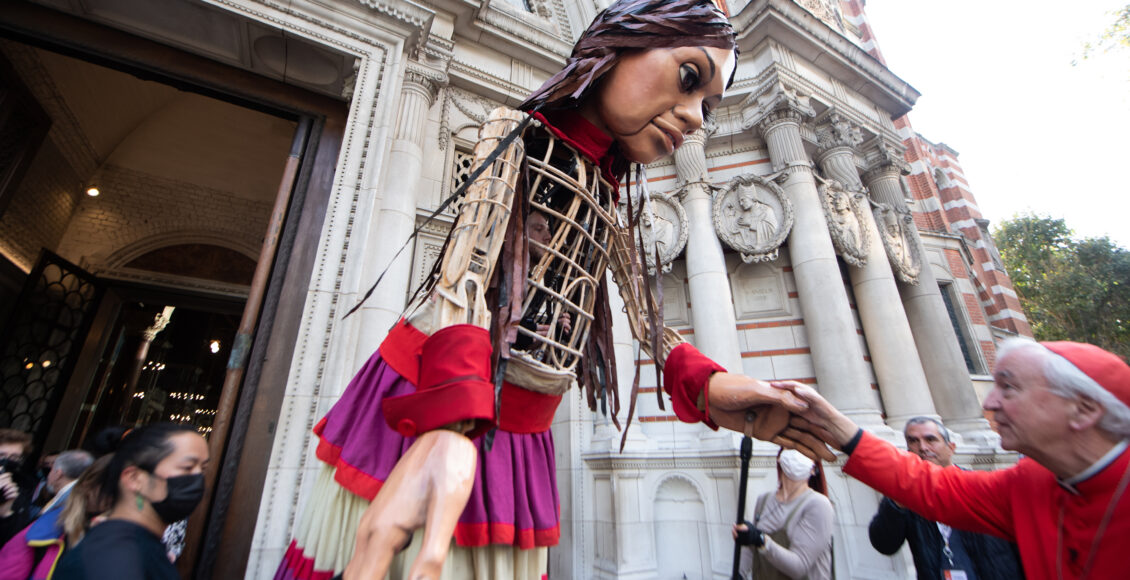 Little Amal, the giant refugee puppet captivating the global audience, is on the last stretch of her 8,000 km journey from Syria to Manchester, UK. Amir Nizar Zuabias designed the puppet, which stands at 3.5 metres tall, as part of the art installation called “The Walk”, an international art project that aims to raise awareness of the problems faced by young migrants and refugees.

On July 27th, Amal, with the help of eleven puppeteers, embarked on her journey from Syria, passing through several European countries, including Turkey, Greece, Italy, France, Germany, and Belgium. Along her route, Little Amal traced the route many refugees take, including leaving abandoned shoes along the Turkish coast representing thousands of drowned refugees, in an effort to symbolize the lived realities of refugees. Amal walked through Europe, but encourages all Western nations to adopt a compassionate and welcoming approach towards refugees. While the media and locals at European stops on Amal’s voyage have responded to her with exceptional support, producer of the piece David Lan admits that “[I]f I was to say to you we had nothing but warmth and support along the 8,000km journey, it would not be true.”

The hostility faced by Amal reflects the prejudiced views towards refugees that are widely held in Western countries. For instance, in Greece, local councillors who felt threatened by her presence voted to ban her entrance and anti-immigration protesters pelted her with rocks. Maybe this should not come as a surprise given that real refugees face Europe’s closed borders approach, which prohibits refugees from entering Europe’s land and sea borders.

The political edge of this project is evident in how it seeks to raise awareness about the lived experiences of refugees while attempting to disrupt hegemonic animosity towards refugees. Little Amal embodies the use of art as a political weapon. Activism art is a combination of art, which moves a person’s soul, and activism, which moves the material world. This medium challenges viewers to consider their own perspective on the current world order, hence bearing the power to generate political change. While humane laws supporting refugees are critical, Western nations will not enact or follow these laws unless there is widespread cultural change. It is this cultural change that Amal demands. Activism art touches people at the level of their values, beliefs, and patterns of behaviour; it takes policies off the page and animates them through a deeply internalized sense of compassion. Rather than merely treating the symptoms of oppression, activist art focuses on the root causes of oppression and on dismantling structures of injustice.

Addressing the puppet’s size, Nizar Zuabis explains: “Little Amal is 3.5 metres tall because we want the world to grow big enough to greet her.” Encouraging the world to grow bigger, Amal engages with the very European nations whose policies are embedded in the negative conceptions of refugees. Europe’s response towards refugees has been clouded by the continent’s perception of itself as the victim of a refugee crisis. In her riveting book Tell Me How it Ends: An Essay in Forty Questions, Mexican author and refugee advocate Valeria Luiselli explains the importance of recognizing that the West is not a distant observer of passive victims faced with the “refugee crisis” but rather “an active historical participant in the circumstances that generate that problem.” With this perspective, the West is encouraged to recognize granting asylum as a responsibility rather than a favour, or worse, a burden. Notions of uprootedness locate the problem within the bodies of refugees themselves, rather than the colonial structures responsible for producing them. This Eurocentric worldview regards a person’s morality as widely dependent on the person’s — and their culture’s — roots to the land.

Fuelled by structures of racialized exclusion and the threat of terrorism attributed to Arab-Muslim refugees, politically uprooted refugees are often considered to be on the brink of falling into terrorism and are thus treated as a threat to national security. This understanding is a driving factor behind why North America and Europe host only 14% of the world’s refugees. In reality, the only form of terrorism that is increased by welcoming refugees into host countries is right-wing violence against refugees and migrants. Little Amal seeks to address these implicit biases which shape national policies and laws towards refugees.

Amal celebrated her tenth birthday in London with musical performances and educational workshops, encouraging children to empathize with refugees. ‘The Walk’ also developed educational activity packs accessible to the general public and schools, following through with its purpose of educating Europeans on this issue. In Brussels, thousands of children joined a letter-writing campaign, answering the question: “What do you wish you could change in the world for children like you and Little Amal?” These letters will be delivered to the European parliament in Brussels.

Amal arrived in the UK on October 20th at a critical moment, when British politicians were in the midst of debating the UK’s Nationality and Borders Bill. Britain has one of the lowest refugee acceptance rates in Europe, and this new bill seeks to punish asylum seekers with a jail sentence of up to four years. Acknowledging this in a press release, the UNHCR stated that this proposed policy would promote an approach toward refugees that undermines international refugee protection and practices. When the bill was introduced in July, it passed its descend reading in the House of Commons by 366 to 265 votes. Facing the next stage of deliberation, it has yet to be seen what impact Amal’s journey might have on policy makers’ conceptualizations of refugees and subsequent decisions regarding the UK’s Nationality and Borders Bill.

A marker of activist art is that the artistic techniques and aesthetics used by the artist are influenced by a deeper understanding of the issue they wish to address. Through ‘The Walk’ art installation, the puppet compels its audience to learn the story of Amal, a ten-year-old Syrian refugee travelling through Europe in search of her mother. Portraying her as an individual juxtaposes the standardized way in which refugee problems are represented in journalism. Dominant portrayals of refugees are often very limited in scope, and overlook personal elements like the gender, nationality, profession, and names of the refugees themselves, instead depicting refugees as a dehumanized flood or mass of people. Specifically, the child migrant experience is portrayed as a trip beneath the undercarriages of lorries and dangerous boat rides. In contrast, with Little Amal, the viewer gets to know her whole, personal story.

Amal challenges the norms around those who are considered legitimate and worthy voices in discussions about refugees. Traditionally, mainstream portrayals of refugees are geared toward the Western viewer in order to generate a response, and European politicians often speak as authorities on refugee issues that work to silence the voices of asylum seekers. Amir Nizar Zuabis comes from a long generation of Palestinians who have been intimately linked to refugeehood, making him knowledgeable about the intricacies of being a refugee. “The Walk” is not just for the global audience; the installation also engages with refugees themselves by visiting refugee camps and organizing creative projects with child refugees. Although Amal is merely a man-made symbol, she embodies the humanity of refugees and the intricacies of the refugee experience in a way mainstream media fails to do.

Little Amal is a piece of activist art that seeks to garner more compassionate conceptualizations and policies towards refugees while making Westerners deeply uncomfortable with our current border regimes. She pushes the general public and policymakers to “grow bigger” so that we can greet her the way she deserves.