Europe’s Far-Right Goes to the Beach 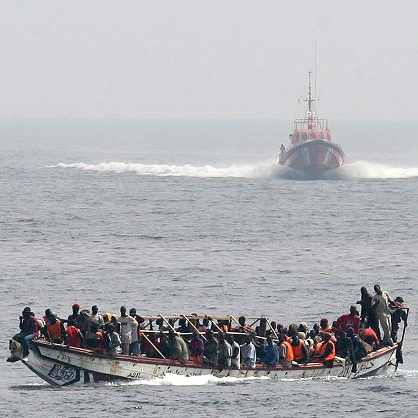 Rescue Mission off the Coast of Spain. Source:
Share

In the summer of 2017, members of European far-right movements will be travelling to the Mediterranean Sea. Scheduled activities will include group bonding exercises, boating, and preventing drowning migrants from being rescued.

Earlier this Spring, a far-right, anti-Islam and anti-immigrant “Identitarian” French group called Génération Identitaire took to the internet to organize and crowdfund their first anti-immigration action at sea. The group’s initial goal was to collect $56,000 to purchase boats, which would then be used to prevent rescue teams in the Mediterranean Sea from saving migrants in distress. In less than a month, the group raised more than $70,000. In May 2017, the French organization bought their first boat and used it to successfully disrupt and slow down a rescue patrol on the coast of Italy. Anti-immigration tactics like these usher in a new era of far-right activism which, ironically, goes beyond borders.

This also entails that parties taking part in rescue operations will have to face yet another set of difficulties while on the job. These operations in the Mediterranean are typically led either by a plethora of non-profit organizations or the European program Operation Triton, coordinated by the EU’s border control department, Frontex. Other than their goal to save thousands of migrants from drowning, what this array of actors has in common is a critically underfunded budget given the urgency of the situation at hand. The Missing Migrants Project indeed estimates that since the start of 2017, more than 2,000 migrants drowned in the Mediterranean, which accounts for two thirds of global migrant deaths.

The amount of money Frontex allocates to Triton is three times less than the funding Italy provided for the Mare Nostrum Operation, which preceded it until 2014. While Mare Nostrum was a short term, single-country initiative in response to the 2013 Lampedusa disaster, Operation Triton has a longer life span and is supported by fifteen European member states. Its monthly budget of around $3 million is seen as insufficient considering that migrant deaths in the Mediterranean were eighteen times higher in 2015 than in 2014, with no signs of abating.

Operation Triton’s already limited humanitarian efficiency is thus further dampened by such far-right organizations, whose popularity and visibility increased hand in hand with the gravity and scale of the migrant crisis. Groups like Génération Identitaire view the flow of migrants as a “tsunami” come to “rip out their roots.” The self-labelled “creative, proud, insolent and rebellious” organization, created in 2012, calls for the end of social and racial mixing, writing on their website that promoting inclusiveness is a threat to Europeans’ safety and individuality. The group considers Europe to be a modern version of Sparta. The aim of their actions on land, and now sea, is to shield themselves from invaders who allegedly perpetrate reverse racism, incite violence and create economic chaos wherever they go.

Due to a sophistication in recruitment methods, the scope and following of these “Identitarian” groups keeps getting broader. The proliferation of their nativist ideals relies on a strong intra-European network, which is composed of groups similar to Génération Identitaire in that their views are unapologetically extreme and designed to appeal to Europe’s youth. These international factions often meet at conventions to discuss strategies designed to increase member militancy, and receive funding to do so from a diversity of bodies, like members of the American alt-right and Russia. As a result of tactical marketing, Vladimir Putin, Russia’s president, is the leader that they unanimously look up to for dogmatic guidance on themes like immigration, religion and homosexuality. The highly organized community is in this way comforted in its political marginality to the point where its members feel confident enough to impose their will on migrants’ fates.