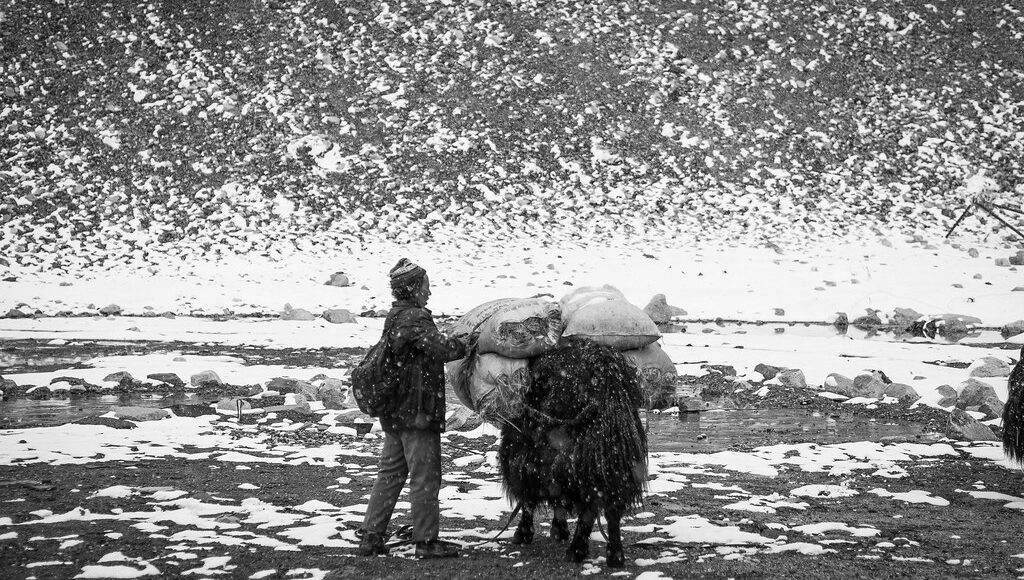 A porter loads supplies onto a yak near Base Camp. "Everest Base Camp － 珠峰大本營" by kllauphotograph.com is licensed under CC BY-NC-SA 2.0
Share

“Everest.” For most, simply hearing or reading the word evokes images of intense bravery and the romanticism of mountaineering. For others, it’s a word affiliated with danger and the loss of life, bringing to mind recollections of failed expeditions, such as the 1996 “Into Thin Air” incident or the more recent 2015 death of 15 people at Base Camp due to an avalanche. But for the Sherpas and porters on the mountain, it’s a way of life.

Nepal’s climbing industry is thus born out of the confluence of necessity for local guides and the lofty ambitions of mountaineers. Essential to any expedition in the region, Sherpas are crucial to a successful summit and form the backbone of Nepal’s high-altitude tourism industry. Climbers pay expedition outfitters between USD 40,000 to USD 100,000 to take care of logistics and guides for a single climb, including just under $20,000 in permit fees alone. The Nepali government rakes in nearly $20 million per season with these permits and other fees, while the average citizen makes less than $700 per year. More recently, COVID-19 caused a significant loss in international tourism, with arrivals decreasing by 80.8 per cent in 2020. Yet, even with the ongoing pandemic, climbing is flourishing again. Despite the virus, Everest remains ever-popular. During the 2021 season, Everest Base Camp hosted about 1,300 climbers, Sherpa, and other support staff. 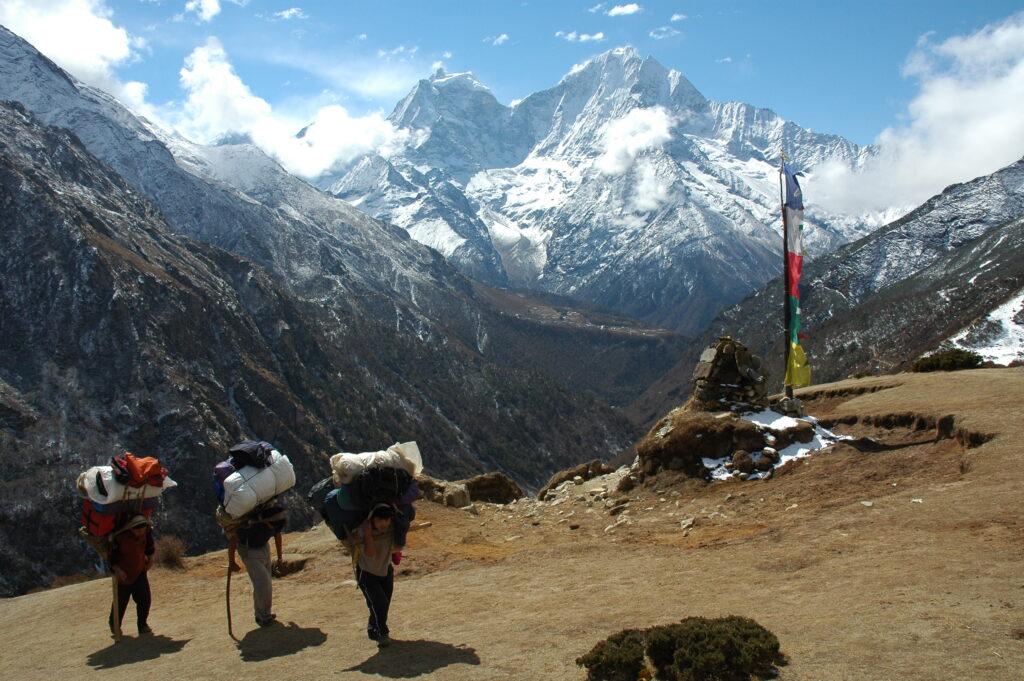 Sherpas transport supplies in the shadow of Everest. “Sherpas.jpg” by JP Vets is licensed under CC BY-SA 4.0But as climbing thrives and continues to function as a significant source of revenue for Nepal, the dangers of being a Sherpa working on the mountain have not decreased. In total, 174 Sherpas have died working on the mountain — one-third of total deaths on Everest, with 15 alone in the past decade. As a result, a Sherpa working above Everest Base Camp is almost ten times more likely to die than a commercial fisherman, a profession considered the most dangerous nonmilitary job in the United States. As Outside Magazine put it, “There’s no other service industry in the world that so frequently kills and maims its workers for the benefit of paying clients.”

What’s more, for the families left behind by those that die or suffer severe injuries on the mountain, the compensation is insignificant: a government-mandated insurance payout of about $4,600, $575 in medical coverage, and at least $4,000 in rescue insurance, as per a 2002 amendment. However, this compensation does little to cover actual expenses. Funeral ceremonies can cost more than the life insurance payout, while high-altitude rescue helicopters cost around $15,000. Moreover, $4,600 is rarely enough to cover the living expenses for the deceased Sherpa’s family, especially when considering that they are often the sole breadwinners for their dependents. This compensation amounts to a fraction of what outfitters and expedition companies receive, which charge climbers anywhere between $30,000 and $130,000. In an industry with such a high mortality rate, surely employers should adjust compensation to reflect this. Yet, the dependents of deceased Sherpas are often left behind, struggling to make ends meet. Social protection is likewise inadequate, and thus thousands of unregistered porters on the mountains work informally without insurance coverage.

So, why do Sherpas continue to guide? Despite the dangers, being a mountain guide remains a well-paying profession for Sherpas. An experienced guide can make up to $10,000 per climbing season, 14 times more than the average wage in Nepal. Adding to living expenses is the fact that food costs five times more in the highlands than in Kathmandu. All things considered, many simply do not have a choice. Kama Rita Sherpa, who holds the world record for climbing Everest 24 times in 25 years, explained in an interview that being a Sherpa was not his first choice, but “how could [he] look for inner peace when back home the lives of [his] parents hung in the balance?”

Another challenge to the everyday lives of Sherpas has been the COVID-19 pandemic, which drastically decreased tourism. Nepal has relaxed several lockdown measures, but the increase in tourism revenue has been disappointing, and some Sherpas have found themselves out of work for an extended time. Functioning as seasonal workers, Sherpas and other porters also rely on jobs as farmers, painters, or labourers in their village, which is also how many have coped financially during the pandemic. However, this is not sufficient for the long-term support that many Sherpas provide for their relatives.

While the increase in traffic has been slow, Nepal has begun granting climbing permits once more, making the threat of contracting COVID-19 another risk that Sherpas face. Developing COVID-19 symptoms at high altitude poses a significant danger, as it is exceedingly difficult to help or treat patients due to issues with transportation to hospitals in the mountainous region. The lack of testing facilities and medical resources to treat those infected at Everest camps is another obstacle.

Given what some might call an exploitative industry, or at least one that promotes the use of Sherpas as a human prop for the aspirations of mountaineers, how can climbers, outfitters, and the Nepali government continue to preserve the beauty of mountaineering while simultaneously promoting ethical business and economic growth? This question remains unanswered. Many guides and expedition outfitters are aware of the issues with the insufficient compensation for Sherpas’ work. Still, they are afraid that increasing their prices to account for better wages and greater insurance coverage might lead to a loss of business. Unfortunately, the reality is that climbing in Nepal is a business, and Sherpas may not see higher wages or insurance policies unless there is some form of collective agreement.

One more serious issue, however, is the attitude surrounding the services that Sherpas supply. In the aftermath of a 2014 avalanche that killed 16 Sherpas, the families of those affected were offered the equivalent of only $400 USD as compensation by the government. As Kami Rita Sherpa remarked, “That was all our lives were worth!” From the British administration in the early days of Himalayan mountaineering to the current Nepali government — and even some modern climbers, Sherpas have been categorized along the lines of “replaceable” or “expendable.” There is a notion prevalent among today’s high-altitude climbing community that top climbers continue to unnecessarily involve Sherpas “despite the wide-spread belief that pros should do their own dirty work.” In most cases, they are hired for the sole purpose of fixing lines and transporting supplies for professional climbers.

There is much work to be done to remedy the situation of the Sherpas. From improving the socio-economic situation of Sherpas such that they have options other than climbing to increasing wages and the insurance payout for the families of the deceased, any solution will require a coordinated effort between outfitters, climbers, and officials. Moreover, climbers who want to achieve the lofted dream of climbing Everest should be conscious of the work situation of those they hire and aim to be as self-sufficient as possible so that they employ the services of Sherpas only when absolutely needed. At the very least, if the climbing industry continues to utilize the labour in the region, it should also invest in the communities, so those entering the workforce can have some flexibility in their decision whether or not to guide.

At the end of the day, a successful climb is just that: a success for the climbers, their guides, and those of us that view their achievements with awe and inspiration.