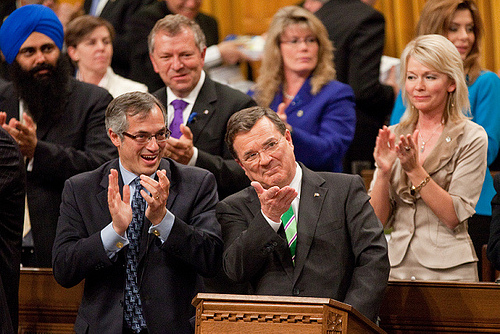 So it appears Jim Flaherty took his walk in the snow, or maybe just a conveniently located gravel path near Parliament. In the end he decided to call it quits. He now leaves the state’s finances in the hands of another colleague. Prudence would suggest that his successor, Joe Oliver, will show much of the same gusto for tax trimming and fiscal prudence. But time will tell.

Now that Flaherty himself has left, the question is, what has he left behind? In terms of policy, some major changes took place at his helm. He famously cut the GST by 2 points, cited by some economists as creating a self-inflicted structural debt burden. Still, he created a new Tax Free Savings account, and also managed to successfully balance the budget.

Perhaps most notably, he also steered the country through the recession of 2008. Swallowing conservative ideology, Flaherty bailed out Chrysler and GM for a whopping total of $13.7 billion and engaged in substantial deficit spending to carry Canada’s economy through the rockiest economic period since the Great Depression. On the regulatory front, he kept a keen eye on the ever-bubbling housing market and attempted some harmonization between securities regulators.

I don’t think much of this will be remembered. “But what about the crippling cuts to services and departments. Raising the retirement age! Cutting Employment Insurance!” some will ask. I say forget that too. Because his biggest legacy is having changed the rules to the game. Specifically, Flaherty’s use of omnibus budget bills. The idea that a budget can include a laundry list of social and legal reforms completely unrelated to a finances was cemented during Flaherty’s term. Budgets of outrageous and unprecedented lengths were introduced in the Commons affecting all manner of changes from the environment, the legal system, labor laws, to how Supreme Court justices are appointed.

Our democracy took a beating through the use of omnibus budget bills. For years, our Members of Parliament were given mere days review a fundamental piece of legislation that was 800-900 pages and rise and vote on it. This left them virtually no chance to adequately study and understand the scope of changes, let alone consult and amend. For years now, funds have been appropriated with little to no knowledge of exactly where the tax dollars were going. A firm majority to fall back on, this became the norm during Flaherty’s time. The yearly hide-and-seek drew outrage at first. But over time, it became business as usual.

We can disagree about the how he spent the public purse. But what’s clear is how he changed the way we do it, squeezing scrutiny entirely out of the process.

Perhaps we’ve forgotten the value of having oversight of public funds in our democracy. Like a shiny little trinket sitting on the mantle you take for granted. With time, slowly collecting dust. Perhaps only when it is quietly slipped into a coat pocket and walked out through the beautiful wooden doors of the House of Commons do you stop and think.