Eyes for Only EU? 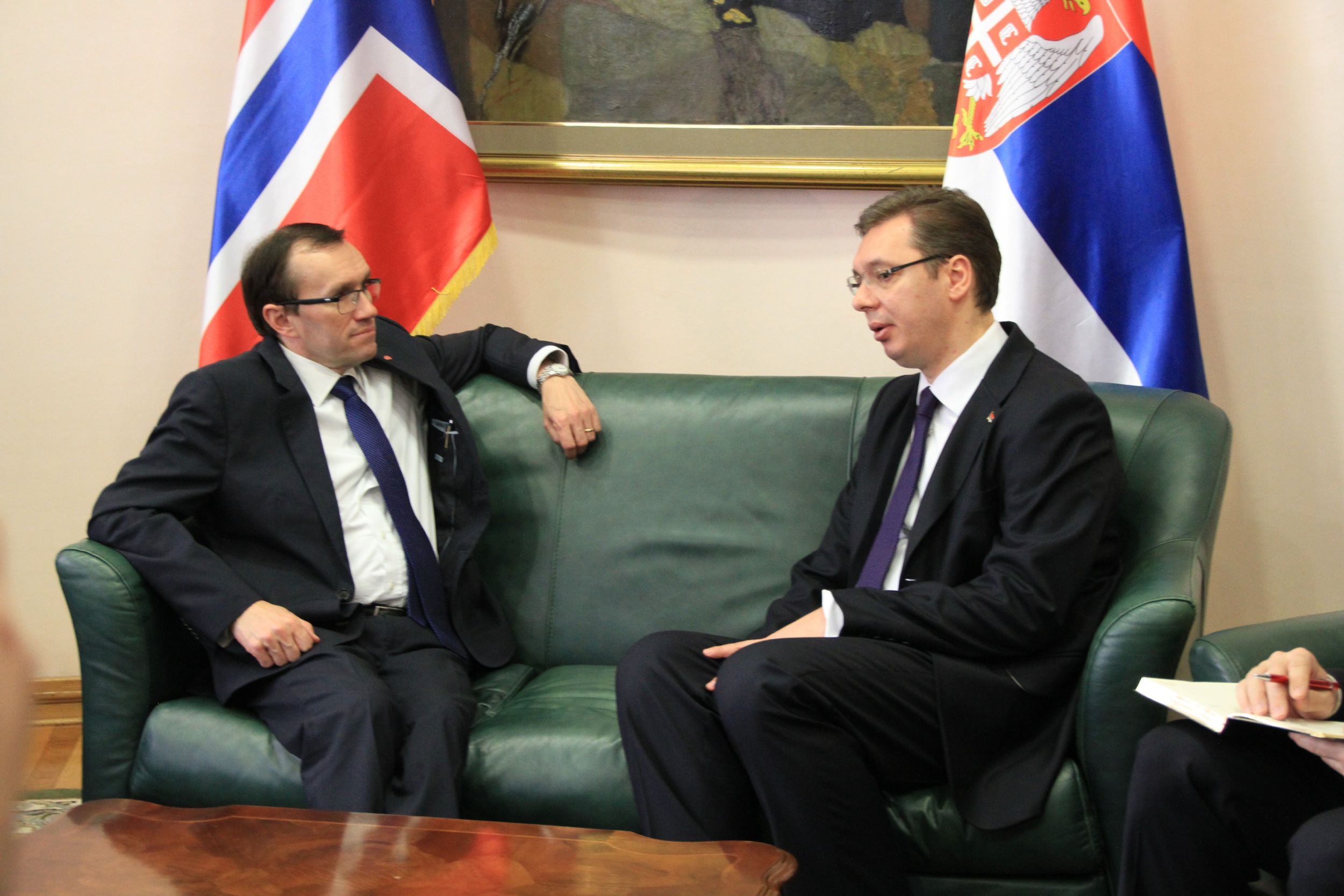 Eyes for only EU?
In January, two years before the scheduled end of his term, Serbian Prime Minister Aleksandar Vučić insisted on calling for early parliamentary elections. Vučić has attempted to legitimize this call by attributing his interest in an early election to concerns for preparation for EU accession. Essentially, the Prime Minister has publicly viewed the early vote as a necessary condition for a new Cabinet, with a clear mandate in place, to pursue the economic and political reforms needed for Serbia to be seen as a realistic future EU member state. The EU has indicated, after their last expansion taking place in 2013, that new members will not be accepted until 2020. What followed on Friday, March 4th, was the dissolution of Serbian Parliament by the President and the scheduling of an early election for April 24th. Critics have begun to condemn Vučić’s move as a ploy to solidify his power as his center-right Serbian Progressive Party already has a comfortable majority in Parliament. Since the end of the Yugoslav War, Vučić has attempted to alter his reputation as an arch-nationalist and close ally of the Serbian strongman Slobodan` Milošević by adopting a pro-western image. However, given his track record of thin skin and discouragement of dissent, Western alignment appears to be a large stretch. Srdjan Bogosavljevic, a consultant at the Ipsos polling company, commented on Serbia, stating, “No one here sees Europe any longer as a dream, they once did. But they can’t see any better alternative.” One alternative that has been diluted by the media, is Serbia’s “traditional ally”: Russia. The Russian-Serbian relationship deserves a strong analysis if we are to thoroughly understand Serbian intentions. Concretely, simultaneously understanding the presence of Russian and EU linkage in Serbia is necessary in order to uncover Vučić true early-election intentions.

Vucic’s self discontent?
Aleksandar Vučić spent more than twenty years as a Secretary General of the Serbian Radical Party, a party which openly promoted ethnic hatred and supported Slobodan Milosevic’s efforts to create Greater Serbia by carving out large chunks of Croatia and Bosnia. However, in 2012 the current Prime Minister appeared to have experienced an ideological epiphany, splitting from his former boss and reviving his image into a humanistic pro-EU politician. Currently, all polls are predicting that Vucic’s populists will win the vote comfortably – as the pro-western opposition is currently too fractured to mount a serious challenge. The election is thus expected to see the rise of far-right pro-Russian groups that failed to get into parliament in the 2014 election. Such a rise is clearly not in Vučić’s immediate best interest. His tenure as Prime Minister has largely been a muddled and often contradictory balancing act struck between his country’s warring liberal and conservative impulses. The Serbian populations’ exposure to a combination of both Eastern and Western leverage polarizes the Prime Minister’s support. An early election may be Vučić’s greatest method to solidify power.

The Serbian Balancing Act
When viewed separately, Serbia’s relationships with Russia and the EU appear cut-and-dry. When both are conceptualized simultaneously however, the picture is not clear. Originally, Vučić openly emphasized his country’s support for the territorial integrity of Ukraine. This seems in line with Pro-Western idealization of Ukraine’s position to the EU. However, the refusal by parliament to impose sanctions on Russia and right-wing political leaders’ open support for Crimea’s re-incorporation with Russia diluted the credibility of Vučić’s comment. Furthermore, Belgrade proceeded to provide informal military assistance to pro-Russian separatists in the Donbas, with Serbian paramilitaries fighting openly in Donestk. It seems Vučić has incentives to convey a pro-Western sentiment in the media and at the same time convince Russia of a permanent brotherhood and position as international allies.

Dual Economic Ties
Economic parameters have an active role in the simultaneous Eastern pull and Western push on Serbia. Since the imposition of Western sanctions against Russia in 2014, the Kremlin has, naturally, tightened economic linkages with Serbia. The former Yugoslavian state is heavily dependent on Russia energy exports as 80% of its gas imports come from Russia (Stratfor 2015) Despite strong Russian ties, the nation has abused Serbian dependence on energy, charging 340 USD per thousand cubic meters of natural gas, a massive rate compared to Serbia’s neighbour Hungary. Currently, Serbia has a lack of alternative short-term energy partners, forcing it to accept pricey Russian exports. However, there are indications that Serbia is actively courting Western investments for improved energy infrastructure. Serbia’s lack of energy independence as left Serbia in a permanently futile position between the two hegemonies. To relax Serbian doubts over Russia’s dominance of the Serbian gas market, Russia has invested considerably in Serbian economic expansion and development. Russian assistance became particularly important after February 2012, when the IMF temporarily suspended its loan deals in retaliation to Belgrade’s refusal to comply with IMF targets. After Serbia’s IMF dispute, Russia expanded investment in Serbia’s infrastructure. Putin pledged the expansion of the South Stream pipeline in 2012 and offered to lend Serbia $800 million for a railway track between Belgrade and Pancevo. Russia has since established a humanitarian center in Southern Serbia to facilitate Serbia’s purchase of Russian military equipment. The Economist Intelligence Unit (EIU) regarded these deals as steps towards making Serbia a Russian corner in Europe, akin to Cyprus, openly regarding the humanitarian unit as a spy centre. In light of the economic benefits associated with Serbian trade with Russia and the compatibility of the two countries on sovereignty norms, it is unsurprising that Serbia is tightening its partnership with Russia simultaneously with its pursuit of EU accession. Furthermore, balancing both may be the only way Vučić can maintain his current position.

On January 11th, Russia’s Deputy Prime Minister Dmitri Rogozin announced Moscow’s intention to arm Serbia with sophisticated weaponry, stating “We are ready to directly support our Balkan ally in the purchase of weapons, including the S300 surface-to-air missile system. We will consider [Serbia’s] request in the shortest possible period.” Rogozin, offered Vučić with a model of a S300 at a recent news conference, commenting that if Serbia had the air defence system in 1999, it would have avoided destruction from the three-month NATO air campaign launched against it over Belgrade’s bloody crackdown against Kosovo Albanian separatists. It appears Russia is taking direct steps to dangle it’s eastern “carrots” in front of Serbian Politicians. Serbia’s views on state sovereignty are historically closely aligned with Russian perspectives. During the Yugoslav wars of the 90’s, Serbia defied the Western ideals on state sovereignty by arguing that Kosovo was an integral part of Serbian territory. This stands in contrast to the 23 of 28 EU member states, and 24 of 28 NATO members who have recognized Kosovo’s independence. Russia pervasively supported the Serbian case, warning the West of it’s violation of international law. Thus, the Kremlin’s father-like stature during Serbia’s weakening inevitably consolidated the long-standing Russia-Serbia partnership. This led Belgrade to automatically support Russian conduct towards Ukraine and Turkey. The 2014 annexation of Crimea allowed Serbia the opportunity to reward Russia for its resolute support for Belgrade’s position on Kosovo by refusing to impose sanctions on Russia, despite EU pressure to do so. The significance of this shared burden, of minority and territorial land claims, keeps the Serbian-Russian bond alive. It also serves as a reference point by which both states can identify each other as apart from the West.

Dual linkage in the Media

Media coverage of investment flows to Serbia has also promoted Russia’s image amongst the Serbian people. Significant attention has been given to Russian development aid relative to EU funds in the years after Slobodan Milosevic’s demise in 2000 which resulted in 47% of Serbians to regard Russia as its main economic backer compared to 28% for the EU in 2014. This statistic was misrepresentation of reality, as the EU provided substantially more economic assistance to Serbia than Russia after the devastating spring 2014 floods.

However, according to the polls, the Serbian public has increased recognition of the value of EU assistance over the course of 2015. This could explain Russia’s recent expansion of ties with Belgrade. As Moscow finds itself increasingly isolated internationally, Putin wants to entrench the idea of a Russia-Serbia special relationship at a time when an increasing proportion of Serbians believe that European integration is the ideal way forward for their country. Given the economic benefits associated with Serbian trade with Russia, and the two countries union on large international norms such as sovereignty, it is unsurprising that Serbia feels pressure to tighten its partnership with Russia, while continuously convincing its pursuit of EU accession. This continuous push and pull leaves Serbia seemingly vulnerable to its two neighbouring powerhouses. Vucic seems formidable to cut his cake either way. Solidifying his power to the public, through the call of an early election, may be Vucic’s way of clarifying to the public, where their loyalty need lie: strictly with Serbia. While the risk of NATO accession through referendum is one Serbian politicians are clearly not willing to take, publicly promoting the idea of an EU accession keeps Western investments in check. However, inevitable reliance on Eastern energy, and the additional benefits of military assistance, illustrates why Belgrade is apprehensive to ‘commit’ to one side.

The evidence presented demonstrates the deeply politicized society that is currently the Serbian state; bitterly divided over ideological issues, often very old ones. The Prime Minister can only hope to balance these positions, presenting himself as an ardent European and, at the same time, a friend of Russia. Mr Vučić tried to meet that challenge by keeping to his course of “neutrality”: continuing with his European Union accession agenda but maintaining “the best possible relations” with the Russian Federation, for economic and military reasons. Calling an early election satisfies Vučić’s short term goal of solidifying his power domestically, while maintaining the long term goal of a Serbian East-West balancing act.

Eastern Approaches, Ex-Communist Europe. 2012. To Russia, with love . The Economist .

Wohlfeld, Sarah. 2015. Headed for Brussels Without a Compass? Serbia’s Position between Rapprochement with the EU and Russian In uence. DGAPkompakt.