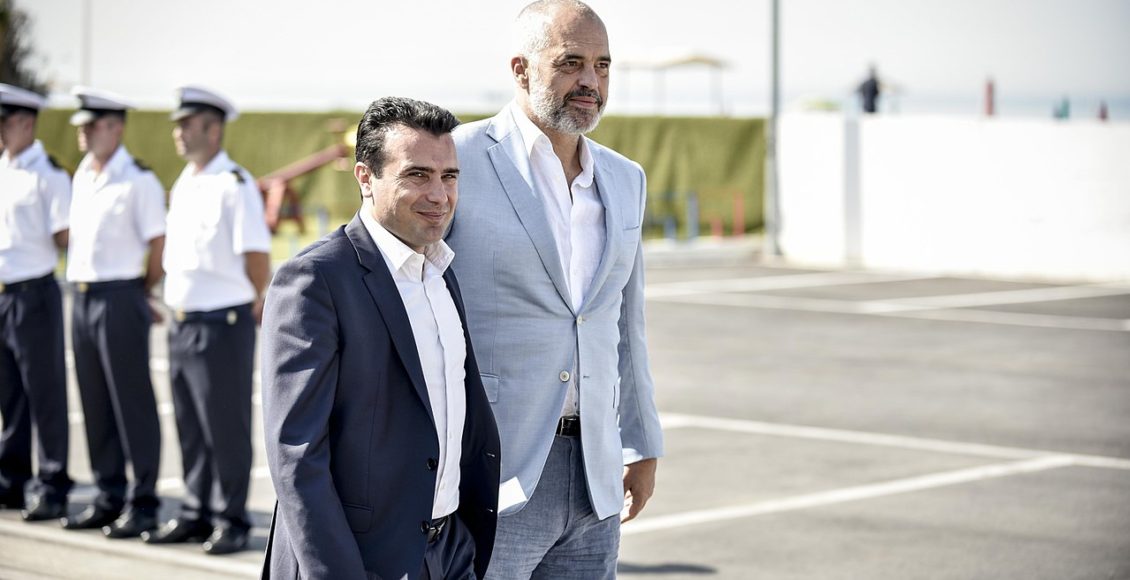 Zoran Zaev and Edi Rama by Government of the Republic of Northern Macedonia is licensed under the public domain.
Share

The stars of the European Union flag are fading, according to North Macedonian Prime Minister Zoran Zaev, now that North Macedonia was left in the cold on the October 18th meeting in Brussels—and French President Emmanuel Macron is thought to be the one responsible.

The past decade has seen multiple attempts by Balkan states to join the European Union. North Macedonia has been blatantly signalling its intentions to join the European Union for years. Some of the other Balkan states have also entered the discussion of joining the EU, while others, such as Bulgaria, Romania, and Croatia have already become members.

Prime Minister Zoran Zaev hoped for a brighter future for his country in the EU following the 2018 Prespa Agreement, an accord that resolved a 27-year conflict with Greece which arose due to North Macedonia’s name. The conflict with Greece posed a tangible obstacle to North Macedonia’s membership, and the resolution was hoped to be the end of the delay. However, Zaev’s hopes were shattered after Macron vetoed the accession talks with North Macedonia, thus halting the process of Balkan integration in the EU. Albania was also ostracized from talks, as the Netherlands and Denmark joined Macron’s opposition.

A single question—“why?”—lingered in the air in Brussels, as both Zaev and Albania’s Prime Minister Edi Rama returned to their homes empty-handed.

What were the reasons?

The Stabilisation and Association Agreement between the Union and North Macedonia in March 2001 was a stepping stone in the Balkans’ relationship with the EU, while North Macedonia has met the ‘criteria’ for the opening of accession talks with the European Commission. It features sufficiently developed democratic institutions and although Albania might not be ready to join due to its lack of well-developed political institutions, it has shown remarkable progress in both the development of democratic institutions and its economy. Thus, Macron’s veto on accession talks with North Macedonia and Albania shocked both the European Commission and the Balkan states.

Macron reasoned that the Union’s current structure for enlargement could not handle the integration of the two Balkan states. The system needs profound reform, he argued, but failed to provide further information as to how that would be achieved. In light of the rise of support for radical right parties throughout the EU, Macron’s concern for stability is understandable. However, it does not justify the public manner in which he rejected North Macedonia. He also mentioned that France has been experiencing an influx of requests for asylum from Albanians, hinting that intra-European immigration is a significant factor for France.

The Balkans might lack very strong economies and impeccable political institutions, but not to the point of failing to qualify for EU membership. Specifically, Albania has struggled with political corruption, while North Macedonia has also seen political scandals and is still in need of improvement in public administration. These problems have already been addressed in the theatre of the EU, and thus cannot be used to their opposition. Macron’s reason for the veto, which included immigration of Eastern Europeans in France, carried implications of divisions within Europe and identity politics on a grand scale.

The integration of Balkan states would not be effortless, economically speaking—most would need financial support in combination with reform plans. However, they would provide added allegiance to the European Union in an environment where Brexit is still ongoing.

The veto was a “historic mistake,” according to Zaev. It showed disrespect to North Macedonia and Albania, who have both complied with European demands and have devoted resources to liberalized restructuring, backed by the promise that accession talks would kick off soon.

It also disillusioned the rest of the Balkan states like Serbia and Montenegro about the promises of European integration. Serbia is signing an agreement with the Eurasian Economic Union, which is largely Russia-dominated and even if this can be dubbed “an act of simple rebellion”, it cannot go unnoticed. The European Union now faces the potential of more  Balkan states turning to Russia and China to create more promising relationships, a consequence which can cost the EU money and influence in the region. Zaev made this clear on the eve of the European meeting in Brussels. It would mean a further strain on the EU’s credibility, especially in this time of euroskepticism, with Brexit still very much alive in European discussions.

The division within the Union was also brought into the limelight, with Donald Tusk, the President of the European Council, and Johannes Hahn, the European Commissioner for European Neighbourhood Policy and Enlargement Negotiations, expressing their discontent with Macron’s decision. Hahn mentioned that the Union’s credibility was damaged after it failed to keep its promise to both these states.

#EPlenary: At last week’s #EUCO #EU leaders failed to live up to their commitment to open #accession negotiations with #NorthMacedonia and #Albania. This is not a moment of glory for the #EU but a matter of deep disappointment 1/5 pic.twitter.com/moJrAze6sz

Domestically, the fate of the Balkans lies heavily on their potential status as EU member states.

North Macedonia has also been facing a notable brain drain, while Albania has been battling the rise of nationalist parties. An open immigration policy with the EU, in combination with the improvement of financial markets and the safety a membership offers, could eventually encourage immigration inflow. A membership also has the potential to slow the outflow of young professionals, as they can have similar opportunities in a flourishing domestic employment market.

Furthermore, North Macedonia’s regime stability was questioned, as Zaev called for snap elections upon returning. Fears of North Macedonia’s nationalist party coming to power still exist, as their election could challenge the Prespa Agreement. The people of North Macedonia changed their country’s name based on promises of accession talks, promises that the EU failed to keep. Now, Zaev’s opposition plans to challenge the Prespa agreement, if elected, while Greece’s current Prime Minister opposed it from the start. A revival of the conflict would mean further strain on North Macedonia both domestically and in relation to its international status.

The EU needs to reassert its credibility in the eyes of the Balkan countries. It should prove to them, and the rest of the world watching these negotiations unfold, that its promises are not empty. Having an extensive sphere of influence that reaches the whole Balkan peninsula would strengthen the EU’s position in the international sphere. It would also deter other world powers from exploiting the Balkan market, while the Balkan peninsula solves its domestic issues with the EU’s assistance.

Featured Image: “Prime Minister Zaev attends informal meeting of Western Balkan PMs in Durres” by Government of the Republic of North Macedonia is under public domain.