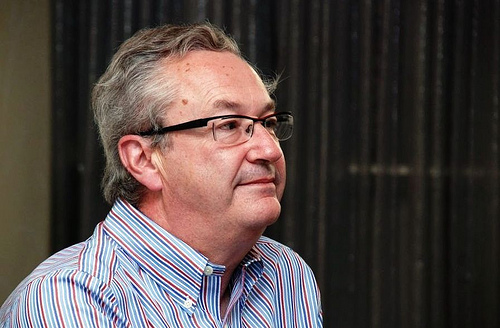 Thud. Marc Mayrand’s translation earpiece slipped off his ear and fell to the table as he was holding up a voter information card. Midway through explaining why we should keep them, the Chief Electoral Officer of Elections Canada, briefly paused to replace it and continued on with what turned out to be a rousing testimony before the Procedure and House Affairs Committee yesterday  morning. A visibly flustered but firmly resolute Mayrand provided his much awaited take on a bill that has sparked anger, frustration and controversy.

He began with an introductory statement, before taking questions from committee members. Dutifully armed with additional printed copies, his assistant hastily handed them out to the hungry horde of reporters. Mayrand began by explaining “it is essential to understand that the main challenge to our electoral democracy is not voter fraud, but voter participation”. He continued through his surprisingly frank statement by criticizing the risks of disfranchisement, lamenting the oversights and loopholes present in the bill as well as warning of reduced investigatory power his office would have.

After being interrupted by a peculiarly timed routine House vote (likely scheduled to cut his speaking time), Mayrand returned to speak on the proposed Section 18 of the act. Peering through his glasses, he grimly stated, “I am unaware of any democracy in the world that limits the CEO in this regard”. IPads in hand, the press gallery (virtually) scribbled furiously.

He moved on to discuss the fundraising exception built into the bill which allows political parties to exempt expenses related to the solicitation for donations to individuals who have donated $20 or more in the last five years. “How will it be monitored?” he pondered. “It is virtually impossible to enforce. This exemption creates a loophole in the expense regime. It could be used to avoid having to claim something as an expense”. Government MPs scoffed at the suggestion that they would intentionally engage in such malfeasance. Untroubled, he pressed on.

What pre-occupied Mayrand next was the absence of a provision that would provide him with the power to compel witnesses for testimony during investigations. A provision that he had publicly asked for months ago. He firmly explained that “6 provincial electoral commissioners have this power. Certain commissioners do not even have to go through a judge, they are virtually at the level of an inquiry commission. I should also mention the Competition Act includes this power as well as well as several other regulatory regimes.” By this point, Conservative MP Dave Mackenzie was having none of it.

Mackenzie’s stumbled through his odd line of questioning and essentially being tersely reminded by Mayrand that “You write the laws. Not me”. Then, New Democrat David Christopherson chimed in, fresh off an 8 hour filibuster from 2 days prior. He peppered Mayrand with leading questions, presumably hoping for a delicious sound bite. The ever sly Kevin Lamoureux followed suit with more success. Managing to get Mayrand to admit that “he would not suggest that governments seek to pass bills of this nature without cross-party support”. When asked if he agreed with the government’s approach to consultations, Mayrand smiled coyly and simply offered “no comment”.

And so they went round and round like that. Government MPs spinning, discrediting and at times browbeating. Opposition MPs prodding and gently twisting his arm for the desired responses. Generally, this is just another day at committee.

An officer of Parliament, on record, vehemently opposed a bill before the Commons. He also went on record calling for the repeal of no less than 8 provisions of the bill. It’s one thing to hear Rick Mercer complain about the bill. Or even a Conservative icon. Even academics, students, interest groups, journalists and everyday Canadians.

But today a bureaucrat stood up. In a city that all too often rewards the quiet and the subservient, he made his voice heard.

When it comes to our democracy, one hopes people are listening.