Fanon and Collective Catharsis: The Removal of Racist Monuments Around the Globe

Frantz Fanon wrote of the "maturing of national consciousness" that preceded and continued throughout struggles for colonial independence. Could the definition of this concept be evolving? 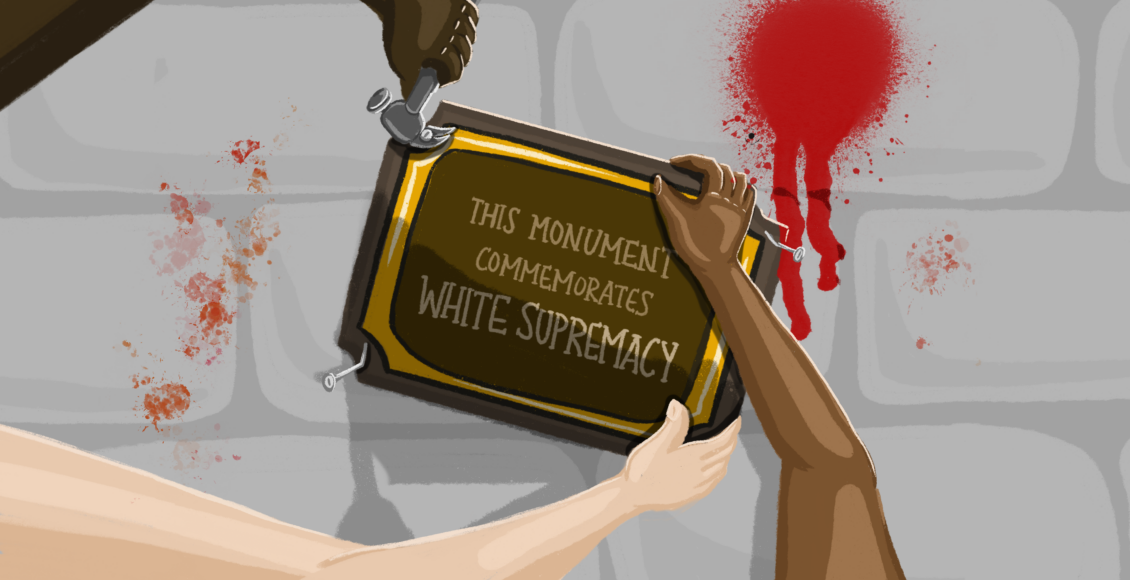 Frantz Fanon (1925-1961) was an influential political philosopher and psychiatrist who wrote extensively about the long-term psychological effects of repressive colonial rule on the minds of colonized peoples. In his 1952 book entitled Black Skin, White Masks, he developed the concept of “collective catharsis,” which describes a process whereby every society develops “an outlet through which the forces accumulated in the form of aggression can be released.” [1]

He also emphasized the necessary role of violence during colonial independence movements, not only as a way to overthrow colonial powers, but also as a “cleansing force” on an individual level. [2] He argued that violence perpetrated against the colonizers “rids the colonized of their inferiority complex” because this violence solidifies the humanity of the colonized after having suffered such violent dehumanization at the hands of colonial rulers. [3]

Now, as Black Lives Matter (BLM) protests continue not only in the United States, but in many countries around the world, monuments to white supremacy are being removed, defaced, and petitioned against. Although the removal of these racist monuments is perhaps not “violence” as Fanon likely envisioned it when he wrote of colonial independence movements, there is a parallel to be drawn between Fanon’s writings about the psychology of decolonization and the great significance of the fall of these statues. In a world shaped by the institutionalization of systemic racism, the uproarious removal of these monuments symbolizes the ever urgent need for reforms.

As BLM protests continue, it does seem as though many regions could be transitioning towards a “maturing of national consciousness” in a way that recognizes the racial diversity of 21st century countries. [4] As Fanon argues, the fact that colonial rule itself is established and maintained through the use of violence necessitates that decolonization be a drastic, violent endeavour — because the colonized do not want to just compete with the colonizer, they “want to take his place” in order to reclaim their humanity. [5] There is thus a parallel to be drawn between the idea of a “national consciousness” as Fanon saw it, in relation to colonial independence movements, and the scale of the current protests and the overthrowing of monuments. The parallel lies in that the removal of these monuments could be an indication that the definition of “national consciousness” is maturing to reflect the need for inclusivity in the racially and ethnically diverse countries of the 21st century, and that continued presence has contributed to marginalizing the struggles of racialized communities in a way that feeds the “inferiority complex” described by Fanon. Both the great number of monuments being toppled and the violent nature of their removal by protestors, across the US and the globe, suggest that like Fanon’s conception of widespread colonial revolts, the collective consciousness is changing.

Many Black, Indigenous and People of Colour have expressed the sustained detrimental effects of the continued honouring of slave owners, murderers, colonizers, and the like by way of these very public monuments. In one letter demanding that city officials remove the base of a Confederate statue in Durham, North Carolina, the City-County Committee on Confederate Monuments and Memorials stated that the “racism the statue embodies has a measurable and devastating effect on Black people, causing levels of stress that cut short life spans and damage mental and physical health.”

In Mississippi, lifetime resident of Columbus David Thornton has had to endure the presence of these monuments since his childhood, including when he attended the Robert E. Lee Middle School. He states that “as a young African-American man living in Mississippi” these monuments have “always made [him] feel inferior […] like [he] shouldn’t hold [his] head up.”

In Antwerp, Belgium, a statue of King Leopold II has been removed after it was defaced and set on fire by protesters. The ruler once owned what is now the Democratic Republic of the Congo (DRC) as his own personal domain, exploiting millions whilst amassing huge wealth, and killing over 10 million Congolese people. Joëlle Sambi Nzeba, a Belgian-Congolese poet and spokesperson for the Belgian Network for Black Lives, states that the statues of King Leopold II send the message that she is “less than a regular Belgian.”

The emotional responses to the downfall of monuments erected in honour of white supremacists has been evident, as many crowds have cheered and yelled as these statues have come down. Referring to when protestors toppled a statue of Edward Colston, in Bristol, England, Marenka Thompson-Odlum, a Research Associate at the Pitt Rivers Museums and a doctoral candidate at the University of Glasgow, said that the “most visceral part was it being thrown into the harbour.” She commented on the cathartic nature of the statue ending up in the River Avon, as the Middle Passage has “claimed so many lives” as a result of the trans-Atlantic slave trade. Since Colston owed his wealth to his involvement in the Royal African Company as well as his own private sales of human beings, Thompson-Odlum argues that returning Colston to this “watery grave” is very fitting.

Many individuals and activists, such as NunatuKavut Community Council President Todd Russell and Kelly Anne Butler, the Indigenous affairs officer at the Memorial University of Newfoundland’s Grenfell campus, emphasize that these monuments are explicit “symbols of colonialism,” and that taking them down does not “erase” history. Rather, their continued presence in prominent public spaces works to erase the real histories of violence, slavery, and exploitation that many of these figures are known for. The continued existence of these monuments is even more reprehensible when contrasted with how other crimes against humanity are viewed today. For example, art restorer Julian Baumgartner argues that these artifacts do not belong in public, and he draws a comparison with the countless Holocaust artifacts that are placed in museums, but “would be abhorrent out of context.” He also calls on other art restorers to refuse to restore racist monuments, saying that it is “incumbent that conservators choose not to restore effigies to bigotry and racism.” Like some other art experts, including Julian Maxwell Hayter, a historian and associate professor at the University of Richmond, Baumgartner argues that these artifacts can be recontextualized by placing them in museums, where they can be discussed alongside evidence of the brutalities committed by these individuals.

The public’s refusal to wait any longer for government officials to order the removal of these monuments embodies the ways social norms are in the process of maturing, resulting in a collective staunch unwillingness to overlook the injustices associated with these individuals. In Portland, protesters toppled a statue of Thomas Jefferson, a man who reaped great economic success from owning over 600 slaves during his lifetime and forcing them to live and work under brutal conditions outside the Monticello mansion. Several statues of Christopher Columbus have been torn down or damaged in cities across the United States, as many reject the popular narrative of the man being an explorer and draw attention to his numerous brutalities against Indigenous people, which include mass murder, enslavement, and what some historians argue can be classified as biological warfare.

As BLM protests are being carried out across the continents, the increased willingness to recognize the atrocities of these historical figures, and subsequent refusal to continue to honour their monuments in prominent public spaces, evokes several of Fanon’s concepts. The violent nature of the toppling of these statues suggests that marginalized groups are experiencing ‘collective catharsis’ after centuries of oppression. The widespread nature of the protests as well as the removal of monuments also suggests that the idea of a ‘national consciousness’ is maturing and becoming more inclusive of the existence and experiences of marginalized groups both historically and today.