Attack after Attack, a Scared Europe: What now? 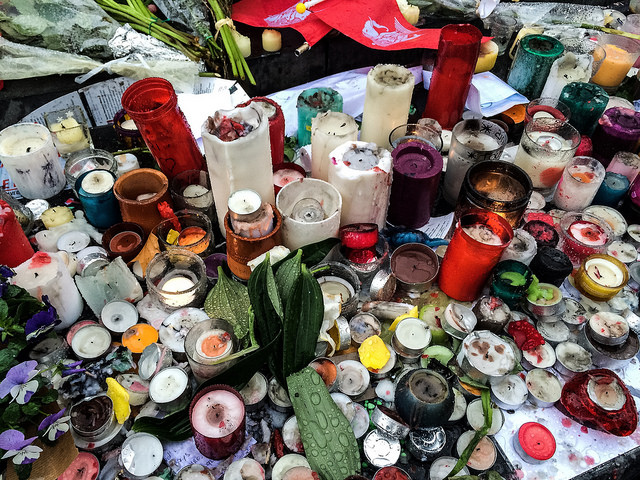 What it feels like to be living in Europe:

Our newly militarized narrow streets echo with the stories of our own, of those who died, of those who saw and those who knew them. We jump up when kids play with firecrackers at our local parades. Attack after attack, we lose track of it all. Fear is natural; it is how we channel it that is of concern. This para-military structure is not only monopolising socially, but transcending into political discourse, and in turn introducing strong waves of Islamophobia into mainstream debates.

What we need to keep in mind as well as address:

In the midst of discussions about the recent attacks, Europe has been the recipient of heavily disguised left and right-wing propaganda through the means of mainstream media. European news and politicians need to be in charge and held accountable of the narratives that they spread and the population needs to be more critical of the information that they consume. A good example of this kind of propaganda is the increasingly popular narrative that states that there is a lack of opposition to the attacks on behalf of Muslim populations in Europe. This notion was disproved by American student Heraa Hashmi, who released a 712 page Google Docs filled with countless demonstrations of Muslims condemning terrorism. Worth noting is that these narratives exist for a reason. They exist because they want to channel anger into their own narrative. This is one of the biggest challenges that Europe faces and is found in almost all political parties. News is not about opinions; it is about facts.

In a recent interview on the very popular TV show On est pas couché, Najat Vallaud-Belkacem, ex-French minister of education, was accosted by a so-called journalist over the alleged changes in the curriculum with regards to spelling. Without skipping a beat the ex-minister burst into folly over the lack of research journalists put into programs and how she was the recipient of fake news,”‘news” which have gone as far as accusing her of making Arabic obligatory in French schools. This outburst is telling as news are feeding into narratives and are often responsible for them. It is worth noting that this journalist was not fired, and that in a way, normalizes the distribution of fake news.

Political parties (Front National and UKIP, for example) are linking immigration and terrorism together to help pass their policies. The people suffering the most from extremists are Muslims, and Europeans should do well to remember that these attacks are not limited to other religious faiths. On top of that, European Muslims experience Islamophobia through blatant racism as well as disguised xenophobia. One cannot deny the racialization of the issue, where people of colour, Muslims, and their intersections experience intense segregation. It is the duty of us all to make a conscious effort to educate ourselves about such experiences.

These news encourage a dichotomy which in turn creates a dangerous rhetoric of them vs. us. It is not the political incorrectness that endangers us all in that statement. It is the lack of definition and attention to the word ‘them.’ Who do we mean by that, and more importantly, what is the consequence of not defining it clearly to the masses? This kind of rhetoric is far too familiar to Europe to be dismissed as harmless. Such a high level of support for the Front National in the recent French election shows this level of disconnect between real information and fear and the lack of productive, sane discussion. By no means limited to right-wing groups, this is not the fault of the general population. Those who can educate themselves and have access to real news and concrete information, whether it comes in the form of journalists, politicians or citizens, need to be held accountable for the information that they spread.

The first and best place to start is making a conscious effort to listen to other communities and political views. The aim should be to understand rather than prove one’s personal and biased narrative. In the same vein of the views expressed by the character Sana Bakkoush in the new much-loved Norwegian TV show Skam: “If you hear anybody use religion to legitimize their hate, then don’t listen to them. Because hate doesn’t come from religion, it comes from fear.”