Fighting Censorship with the Revolutionary Power of Hip-Hop 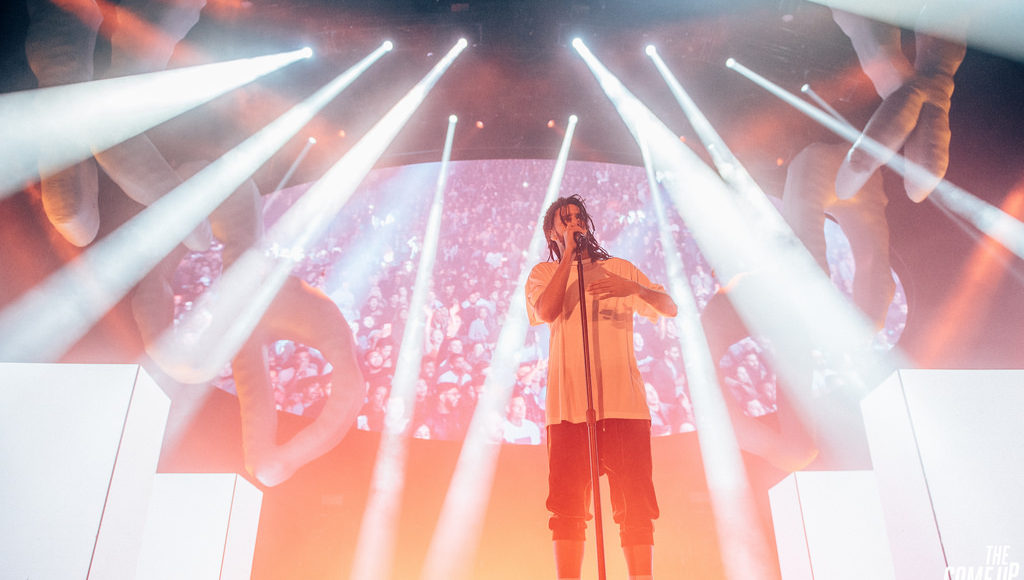 It is no surprise that as of 2017, Hip-Hop became the most consumed musical genre, even surpassing rock. In less than forty years, Hip-Hop created a culture for the youth that gathered teenagers and young adults from all over the world. In countries facing strict censorship, where freedom of speech is considered a threat to public morality, underground artists spark debates, mobilize groups and challenge the state with their provocative words that aim to trigger a reaction. Thailand, Russia and Tanzania are some of the many examples where the governments takes strict measures to limit free expression, but where artists vehemently resist in creative ways, making civil demands louder. Hip-Hop has acquired a central role in this process. It is both the force behind the protests and an effective tool to instigate a conversation between the state and the youth. It is a clear sign that young activists will stop at nothing to have their rights protected.

Hip-Hop emerged in the streets of South-Bronx in the United States during the 1970s  as a response to Black people’s economic, social and political conditions. With the Civil Rights Movement coming to an end, its momentum proved to be short-lived and illusory. African Americans remained particularly affected by disproportionate levels of unemployment and high rates of poverty which contributed to further social marginalization. While South-Bronx was slowly being deserted and abandoned, it became the birthplace of Hip-Hop, a movement of resistance against societal negligence. To this effect, it was always about more than the music. Hip-Hop was a cultural art form with four main elements: rap, DJ, break-dance and graffiti, co-existing and allowing artists to maximize their individual expression. Dj Kool Herc, who is widely known as  the pioneer of Hip-Hop, performed in clubs with his two turntables to create loops, and later when he invited his friend Coke La Rock to host with him, it marked the beginning of rap music as we know it.

Although, rap and hip-hop are often confounded, in the words of rapper KRS-One: “rap is something we do, Hip-Hop is something we live.” Hip-Hop is a lifestyle, encompassing all elements of the genre while rap is rhymes and rhythms with synthesis and recombination of beats. What distinguishes rap from other genres is its ability to create cathartic experiences with little melody, making frequent use of metaphors, analogies and imagery to tell stories.

From Dj Kool Herc to Grandmaster Flash and Afrikaa Bambaataa, the late 70s and early 80s were characterized by the expansion of revolutionary Hip-Hop music. The 90s marked the Golden Era of the genre as the world became familiar with notable artists like Ice Cube, Tupac, Notorious B.I.G and Lauryn Hill. What explains its success is the underlying power; Hip-Hop has the effect of bridging gaps and bringing people together. Similarly, rap attracts fans because of its power of fusion. Through recounting personal stories, it describes collective fears and hopes. It tells the story of a people that aspire for progress, freedom and for a chance to improve their conditions. This is why rap touches the hearts of many. Its poignant, lyrical and rhythmic punches, its strength in vocal delivery, its straightforwardness and its confrontational nature urge the audience to pay attention.

Hip-hop first provided a platform for Black youth in America to deal with the injustices of their time. Since then, the phenomenon has been picked up internationally to promote civil rights, especially in places where there is a lack thereof.  In Thailand, Tanzania and Russia strict censorship not only controls citizens’ speech but also their quality of life. Great uncertainties about what the future holds have forced activists to seek greater instruments to fight for s stability. While Hip-Hop has become a popular mean to their ends, its effects have troubled  governments, compelling the state to respond.

In the past months, Thailand has experienced a revival of free speech protests, especially in anticipation of the March 2019 elections which marked the first election since the 2014 Thai military coup. Under dictator Prayuth Chan-Ocha, all  forms of political dissidence had been silenced and strict censorship came at the cost of individual rights. Recently, Hip-Hop culture became a tool to ensure civilian demands were heard. Young adults protested in the streets, painted graffiti, but out of all forms of dissidence, rap had the biggest impact. In October 2018, a group called “Rap Against Dictatorship” (RAD) released  a music video for “Prathet Ku Mee”, meaning “What My Country’s Got” to denounce the extreme censorship. The graphic and critical video obtained more than 60 millions views and as a result, the State refrained from taking it down. This confirmed to civilians that the state had lost control over the spread of the viral video and the quickly unfolding Hip-Hop movement. A 17 year-old  group member, Elevenfinger, gathered students from his class to rap against the education system, “[i]t’s like the government does not want us to think”, they sang in his classroom. A student explained that the education system does not teach students to think critically, rather it teaches them to obey. After the classroom protest and the popular YouTube video, the government faced growing opposition and backlash. With its back against the wall, the state had no choice but to respond.

Initially, the government made threats to arrest the artists, but in witnessing the overwhelming response of RAD’s song, it decided to co-opt Hip-Hop to appeal to the youth. A week after RAD’s single debut, Thai government released “Thailand 4.0“. The Hip-Hop music video, where Thais were seen working in robotics, promoted the pro-junta government as it claimed to know best how to advance the country’s economy. The song  included the following lyrics: “The brain has a good idea. Just add technology to go further […] Know – think – create, do, make up, make up.”  The lyrics raised a question; for a state criticized of failing to teach its students to think critically, one must wonder what knowledge, creativity and progress could mean to the government. In either case, the youth were not convinced. 60,000 dislikes out of four million views demonstrated poor support for the government’s efforts.

The Russian Federation is another example of a coercive state that struggles with the expansion of Hip-Hop music. In November 2018, following the news that authorities had shut down his official concert, Russian rapper, Husky, gathered his fans in the streets of Krasnodar to perform on the hood a vehicle. The artist was later arrested for twelve days on the grounds of hooliganism, but the charges were dropped. President Putin explained that rap music is only about “sex, drugs and protests”, hence Husky’s performance had to be cancelled because it promoted immorality. Husky’s expresses his social activist stance many times in his music. In his song “7 October” (Putin’s birthday) he tells the story of a king who enjoys a copious meal while his people are dying of starvation. He clearly denounces Putin’s lifestyle and his lack of action tackling poverty. His songs mostly address themes like famine, poverty and violence, lurking over Russia because of widespread squalor. Russian rappers like Husky who sincerely address their experiences find great success among the youth and it is not a surprise they relate so much with him: it is their reality too.

Husky’s arrest caused nationwide debates about the future of free speech. Anti-Kremlin activist par excellence, Alexei Navalny, provided an alternative suggestion to why the government  canceled Husky’s show,  “[the] Kremlin feared the concert would turn into a manifestation for freedom of speech and creativity.” Underestimating the unifying power that underlies rap, the Kremlin had not anticipated the arrest would cause even more upheaval. Known rappers organized a charity show and sang, “I will be singing my music/My most honest music”, a quote from Husky who rapped these lyrics as he was being arrested. After such responses, Putin himself explained there would no longer be attempts to abolish Hip-Hop, rather the government would focus on co-opting it. He reasoned that “if it’s impossible to stop something, you’ve got to take charge of it”. Currently, his new policies involve guiding the industry in what the state considers the “right direction”.

Compared to Thailand and Russia,  the case of Tanzania presents an interesting contrast. Despite the effort of  Hip-Hop artists to create a space for political and social critics, it has not met the same level of  success as Thailand and Russia. In 2017, rapper, Nay wa Mitego, was charged for singing “offensive [lyrics] to the administration”. Wa Mitego, speaking directly to President Mugufuli sang: “Which sort of person are you? You don’t want to be counseled. You don’t want to be criticized. You are bewitched[!]”, implying that the government is highly unaccountable to its citizens. Since Nay Wa Mitego’s brief arrest, the government has only increased  levels of censorship.

What is particular about Hip-Hop in Tanzania, known as Bongo Flava, is that critical rap does not only address the political failures of the state, it also addresses societal objectives. To this effect, rappers are more than artists; they are educators as they teach the young, the poor and the uneducated about “joblessness, corruption, class differences, AIDS”. They go as far as graphically describing the consequences of avoiding the “use [of] condoms”. For Tanzania’s young adults, Hip-Hop is also a tool used to tackle the “social pressures” their environment imposes upon them. In Dar es Salaam, the high unemployment rate (up to 40%) forces many to work in the informal economy, including drug trafficking and prostitution. Hip-hop on the other hand,  gives them a purpose and empowers them to feel like accomplished members of society.

Although Tanzanian artists are facing increasingly strict censorship making it harder to promote their educational messages, they find ways to avoid state institutions through underground music, social media and new technology . Their success is bolstered by the many activists and  opposition leaders who defend their rights along with Bonga Flava’s expanding popularity abroad. The uniqueness of the Tanzanian case shows that the power of Hip-Hop can be multi-dimensional, either direct or indirect, but nonetheless effective in its ultimate purpose.

In sum, the Thai and Russian governments prove that it is difficult to contain Hip-Hop movements because of its ability to unite and mobilize. Similarly, the Tanzanian government shows  that even if states prefer to censor Hip-Hop, the act is in vain because the support rappers receive will always allow them to fight to uphold their inalienable right of liberty one way or other. In the words of rapper J.Cole: “Don’t let ’em take control, Don’t let ’em taint your soul/ If you ain’t aim too high, Then you aim too low.” Whether it is DJ Kool Herc, Rap Against Dictatorship, Husky or the Bongo Flava artists, they show us that anything is possible if we aim high enough.