Fighting for Gender Pay Equality, One Minute at a Time 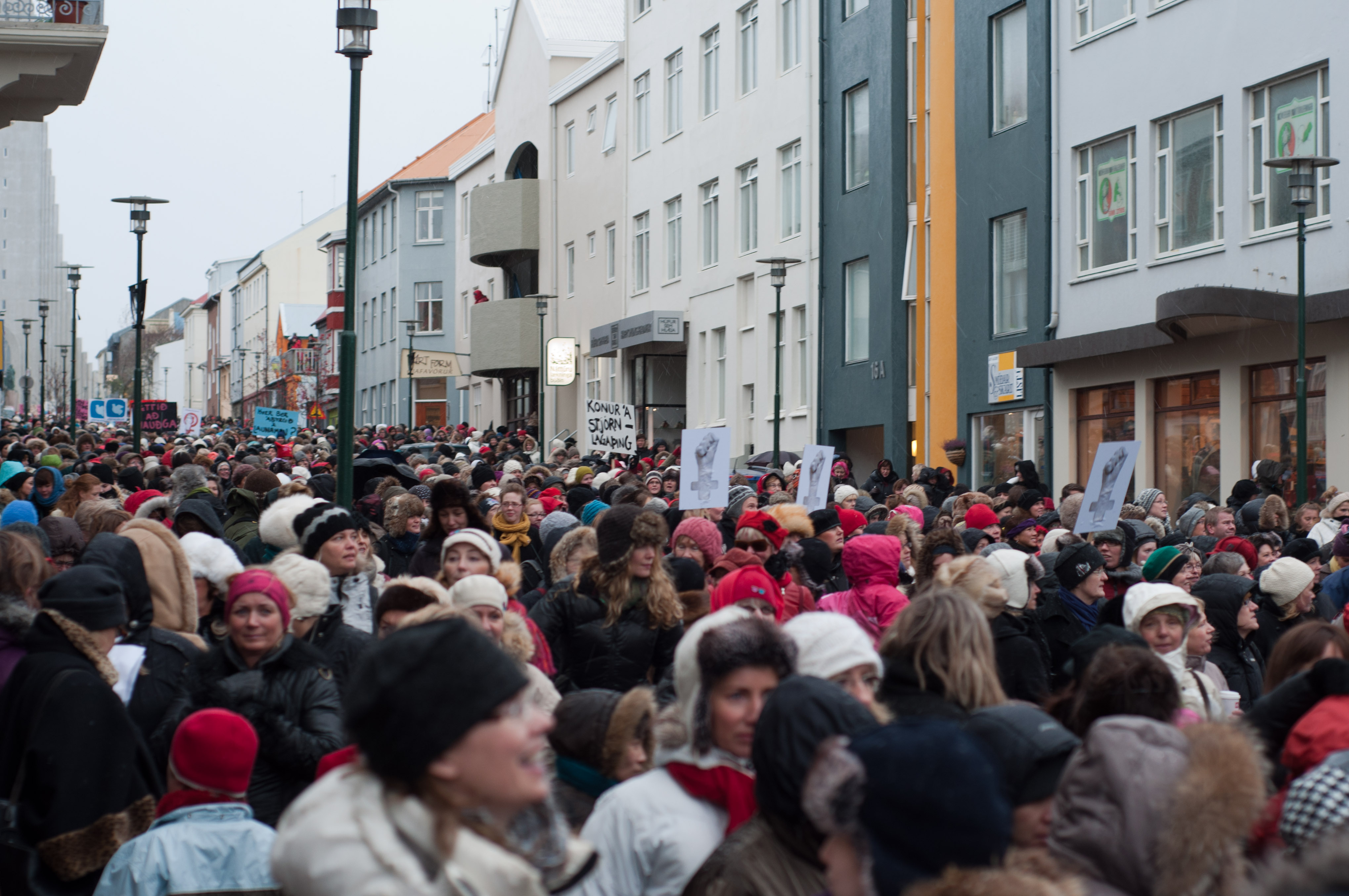 Every year on October 24th, women in Iceland finish their work, pack their bags, and leave work at —what might seem to some— a very peculiar, prespecified time. This October, it was 2:38 pm, or 86% of the Icelandic work day. In October of 2010, it was 2:25 pm. What these times have in common is that they both mark the exact point of the day when women start working “for free” compared to their male counterparts.

Even though still lower than Europe’s average of 16.65%, Iceland’s 14% gap seems substantial for a country considered one of Europe’s most progressive. Over the past years, the time at which Icelandic women left to protest on Women’s Day Off fell later in the day by mere minutes. In 2005, they left work at 2:08. In 2008, they left at 2:25. This three-year change constitutes an annual improvement of three minutes. According to Paul Fontaine, an Icelandic journalist, at this pace, the wage gap will not be closed until 2068.

With many progressive social programs and laws against gender discrimination, Iceland still puzzlingly faces serious problems of inequality. Based on prior understandings that motherhood and household work contribute to the existence of pay gaps, the gender pay gap in Iceland should in theory disappear. Firstly, Icelandic policy mandates that, upon the birth of a child, each parent be provided three months of non-transferrable paid parental leave; parents are also granted an additional three months that they can share however they like. This parental leave should mean that motherhood and maternity leave no longer play into the wage difference between men and women, since the parental leave is shared by both. Secondly, Iceland provides substantial state subsidies for nursery schools and after-school care. Therefore, childbearing and childrearing should in theory also not be considered as a reason for the gender pay gap.

Even though it is still present, Iceland’s gender pay gap is the best in the world at 14%. What differentiates Iceland from other countries in the developed world is its staunch determination to eliminate the gender pay gap. This can be observed by comparing Iceland’s policies to those of other advanced countries, who either fail to eliminate the gap due to the absence of active effort, such as Canada, or are only just beginning to actively fight the gap, like France.

Canada’s 26.5% pay gap is even bigger than Iceland’s, another example that even really progressive countries find it difficult to reduce the gap. Despite numerous social programs and benefits, Canada has persistent gender inequality. The World Economic Forum’s Gender Gap 2016 report shows Canada dropping to 35th place from 19th in 2014, with women’s salaries falling from 74.6% of men’s salaries to 73.5%. Canadian journalists note a lack of progress towards closing the gap in the past few years, which contrasts with Iceland’s determination to resolve the issue, as demonstrated through their yearly protests. Contrary to Canada, Iceland is also implementing the “Equal Pay Standard,” an official seal of approval given to companies that pay their male and female workers equally. Contrastingly, the candidates during the 2015 Canadian federal election were under heavy scrutiny for largely ignoring the issues surrounding the problems concerning women and work. Canada also has less frequent protests and mobilization efforts against corporate gender inequality than its almost equally progressive counterpart, Iceland. Meanwhile, Iceland’s government continues to actively pursue efforts to end gender inequity in the workplace. Members of the Icelandic government have stated that, even if they are first in rankings, the gap is unacceptable and they do not intend to wait 50 years, to solve the problem. In the end, compared to Canada’s “stalled progression,” Iceland’s aggressive approach and determination to win the battle against gender corporate inequality is remarkable.

France, a political and economic leader in Europe, is also struggling against the gender gap; however, contrary to Canada’s lack of effort to remedy the problem, French women are now beginning to take action. Iceland’s Women Day Off has been influencing women in various countries to fight for their equality. On November 7th 2016, women in France, particularly in Paris, stopped working at 4:34 pm (and 7 seconds) to protest against the gender pay gap in the historic Place de la République. This time symbolized the point in the year at which French women start working “for free” compared to their male colleagues. France is ranked 17th by the World Economic Forum in their Gender Pay Gap report, with women paid 25.5% less than men.

By comparing the Canadian, French, and Icelandic cases, we can clearly see that action, awareness, and persistence are necessary to help reduce the gender pay gap. However, the pay gap remains a considerable barrier for women in the workplace, even in countries with progressive and interventionist state agendas such as Iceland. For example, Canadian women are more likely to be the primary caregivers for their children or parents and tend to spend more time on unpaid housework, affecting their participation in the labour force. In Iceland, however, parental leave is granted to both the mother and the father, and yet the gender pay gap remains. How do we explain this persistence of the wage difference between men and women? One can conclude that discrimination and other unconscious factors also play into the wage gap.

The cultural dimension of gender inequality may explain how the smallest pay gap in the world lingers at 14%. New studies expose the cultural predicament behind the gap. Elise Gould and Jessica Scheider speak in their report about the “cultural norms and expectations, [the] societal forces that aren’t cleanly captured by pay data”. Perhaps, beyond the framework of Iceland, the problem surrounding the gender pay gap is one about culture and education. Thus, government and civil society must contribute to the effort to reduce the pay gap in every country across the world. These crucial actors’ cooperation is essential to make a difference, whether it be in Iceland, Canada, France or any country in the developed world. Without an ability to define the reasons and direct causes of disparities in pay, without the strong effort from government and civil society, eliminating the gender pay gap becomes near impossible.