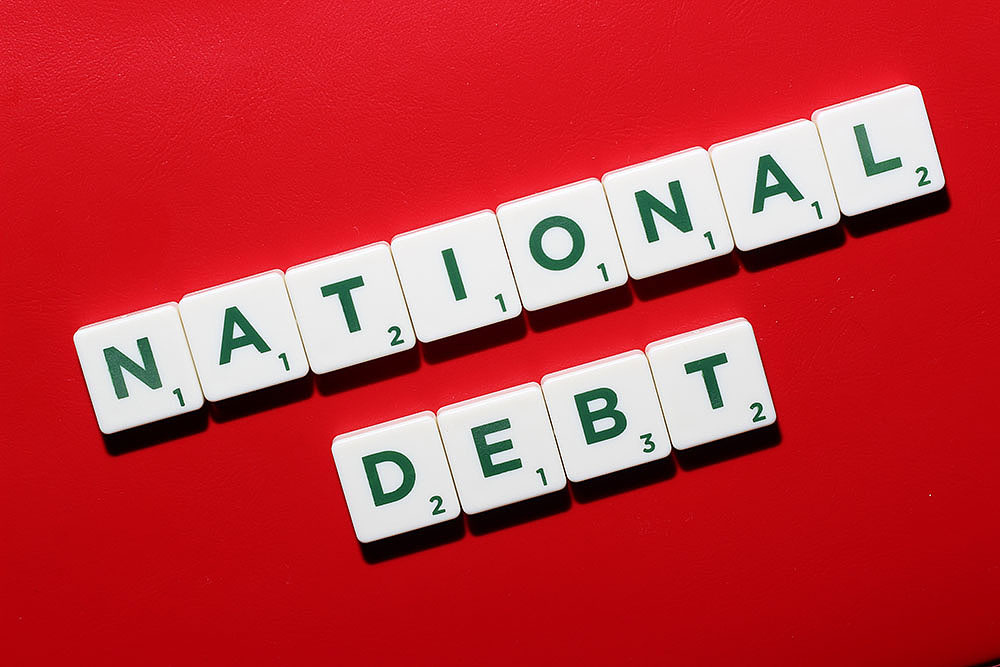 The US' national debt continues to grow by the second. https://flic.kr/p/Janx9N
Share

It used to be that both parties cared about spending money responsibly in Washington. In 1960, President Dwight D. Eisenhower balanced the US budget by working alongside Democrats in Congress. The last president to post a national surplus, with more cash inflows than outflows coming into the national Treasury, was Bill Clinton in the 1990s. These feats were only achieved through a bipartisan consensus that, just like any family, during times of economic normalcy, the government should not spend more than it takes in.

Of course, this comes with the caveat that during an economic slowdown it makes sense to run a deficit and spend in order to generate consumer spending. Fiscally expansionary strategies can be a useful tool, as shown by the relative success of President Barack Obama’s stimulus package. Independent economic analysis demonstrates that this large influx of spending and tax cuts during the Great Recession reduced unemployment, protected the middle class, and created hundreds of thousands of jobs. However, when the economy is doing particularly well, such grandiose spending projects are not always necessary.

Before diving into the political economics of fiscal responsibility, we must make a distinction between deficit and debt. The deficit is the negative balance each budgetary year when larger expenditures are subtracted from receipts. Debt is the accumulation of these yearly negative balances over time, culminating in a large sum of money owed to creditors.

Thus, from 2009 to 2016, President Obama simultaneously increased the national debt by 86% while he decreased the deficit by 2/3. With this mixed record, the national debt is now approaching $21 trillion. The 2018 midterms are rapidly closing in, and Democrats find themselves scrambling for a message. Polling shows a way forward; 76% of Americans believe that Congress and the President should prioritize the debt, and 53% believe that the nation is on the wrong track on fiscal issues.

Republicans consistently promise to cut spending, but now that they control the US government, it’s worth asking how they are addressing fiscal responsibility. Perhaps there is an opening for Democrats to once again stand for smart budget policy.

Well, for one, the Trump administration squandered their best opportunity to pass a deficit-reducing tax reform package. The recently passed Republican tax bill will add anywhere from $448 billion to $1.3 trillion to the national deficit over the next ten years. However, only one Republican, Representative Walter Jones of North Carolina, voted against the bill because of its fiscal impacts. This massive decrease in revenue reverses the deficit cuts that President Obama ushered in. And for what? The Republican tax plan was labeled by the Washington Post as “probably the most regressive tax cut in the past 50 years”. Experts note that the vast majority of this law’s gains will go to those at the top, not average Americans. The GOP tax reform package is a perfect example of a deficit-increasing proposal that widens the growing economic inequality in our country, a lose-lose situation.

Additionally, President Donald Trump, who promised that Mexico would pay for the construction of a border wall, is now asking American taxpayers to shell out $18 billion for 316 miles of construction. This length of the wall doesn’t even cover the entire border. Like France’s ill-fated Maginot Line, Trump’s incomplete border wall makes no sense. The wastefulness of building a wall to counter illegal immigration is additionally highlighted by the fact that 2/3 of undocumented immigrants enter on a visa legally and overstay, countering the dominant narrative that millions leap over the Southern border. Building a wall is not fiscal responsibility, and it’s not even effective.

These might seem like typical examples of hollow political promises being broken, but America’s fiscal state is no trifling matter. The ballooning national debt is not just another number; it’s a danger to our national well-being and to that of future generations. Former Chairman of the Joint Chiefs of Staff Admiral Mike Mullen identified the national debt as the most pressing threat to national security. Excessive debt threatens our security in a number of ways. As debt skyrockets, less money will be available for adapting national defense strategies to threats like Russia, China, and the security impacts of climate change. Additionally, with the ascendance of China, the US risks lower credit ratings and an overall loss of global standing. It is thus imperative that policymakers cut back on excessive spending and start to pay down the debt. Future generations of Americans should not be burdened with the irresponsibility of their parents’ generation.

Often, Democrats don’t approach this issue, because many politicians who lambast deficits employ this rhetoric as a pretext to cut programs like Social Security, Medicaid, and Food Stamps. Eliminating benefits for the vulnerable, however, is the wrong approach. Without Social Security, the poverty rate among the elderly would be 53% instead of 15%. Without food stamps, the poverty rate would be 17% instead of 15%. Without tax credits for poor children, the child poverty rate would be 23% instead of 20%. It’s clear that government spending can be useful, so how can policymakers cut the deficit without negatively impacting the quality of life? How can Democrats once again be a party of fiscal responsability?

While getting America’s fiscal house in order should be a priority, there is, in fact, a progressive approach that uplifts the American people and cuts waste from our government without harming the vulnerable.

Why not, for example, look into a carbon tax? Former Idaho Congressman Walt Minnick recently proposed a $49 per ton fee on emissions, indexed to increase by 2% yearly, which would bring in $1.1 trillion after rebates to offset cost of living increases for poor and middle-income families. Even a more politically palatable carbon fee dividend, which would equally distribute revenues among American families, would drive GDP growth by around $80 billion from 2020 onward and create 2.8 million jobs over 20 years. This increase in growth and employment would conversely increase government revenue and lower the deficit. Putting a price on carbon achieves the longtime progressive goal of lowering carbon emissions while both avoiding onerous regulations and incentivizing responsible corporate behavior, two ostensibly conservative goals. Thus, perhaps a moderate idea like the carbon fee dividend can be a fiscally responsible rallying point on Capitol Hill.

Moreover, truly fair tax reform would lower the deficit and allow policymakers to tackle the national debt. Senator Bernie Sanders lists some potential ideas on his website. Some of Sanders’ ideas, while at times derided, are worth examining. The Institute on Taxation and Economic Policy found that a one-time repatriation of Fortune 500 profits stashed abroad would bring in $752 billion. Additionally, the Tax Foundation notes that taxing capital gains at the regular tax rate for those earning over $250,000 would generate $1.2 trillion over 10 years. Finally, the Center for Budget and Policy Priorities found that increasing or eliminating Social Security’s cap on taxable wages would close anywhere from 25% to 90% of the program’s solvency gap. What these ideas have in common is that they make the tax system more progressive while significantly cutting the deficit and saving entitlement programs. They effectively accomplish the dual goals of fiscal responsibility and responsibility towards working families. While Bernie Sanders’ 2016 campaign proposals like tuition-free college would have cost an astronomical amount, maybe there’s some merit to his revenue-raising proposals.

Finally, one beneficial action the Trump administration has carried out that Democrats should get behind is the auditing of the Department of Defense (DoD). Progressives should support this effort and seek to act on its findings. Never in the agency’s history has there been a full DoD audit. Every year, nearly $900 billion is spent on the DoD, paying for troops, weaponry, military bases, research, and a host of other priorities. A 2015 study that identified $125 billion in wasteful spending at the Pentagon was suppressed and ignored but reached the conclusion that massive savings could be procured through attrition, retirement packages, innovation, and more accountable contracting methods. Auditing the DoD lets the government eliminate wasteful spending without adversely impacting military preparedness, a win-win situation.

As the national debt continues to balloon by the minute, it’s time to take a new course and tackle America’s deficit and debt by pursuing fiscally responsible policies. Democrats err in allowing Republicans to dominate the debate on this issue, even as the Trump administration recklessly accrues debt. Models of what America needs already exist in Congress. Peter DeFazio, a Democratic Congressman from Oregon, is both the founder of the Progressive Caucus and the sponsor of a Balanced Budget Amendment. DeFazio exemplifies the tenets of this article, and Americans would do well to elect more representatives like him. The 2018 midterms should give those who share this vision hope; a number of Democrats in swing districts have pledged to pursue fiscally responsible policies. A progressive approach to fiscal responsibility would allow Democrats to gain legitimacy, cut wasteful spending, and create a fairer society. To Democrats, that should be common cents.