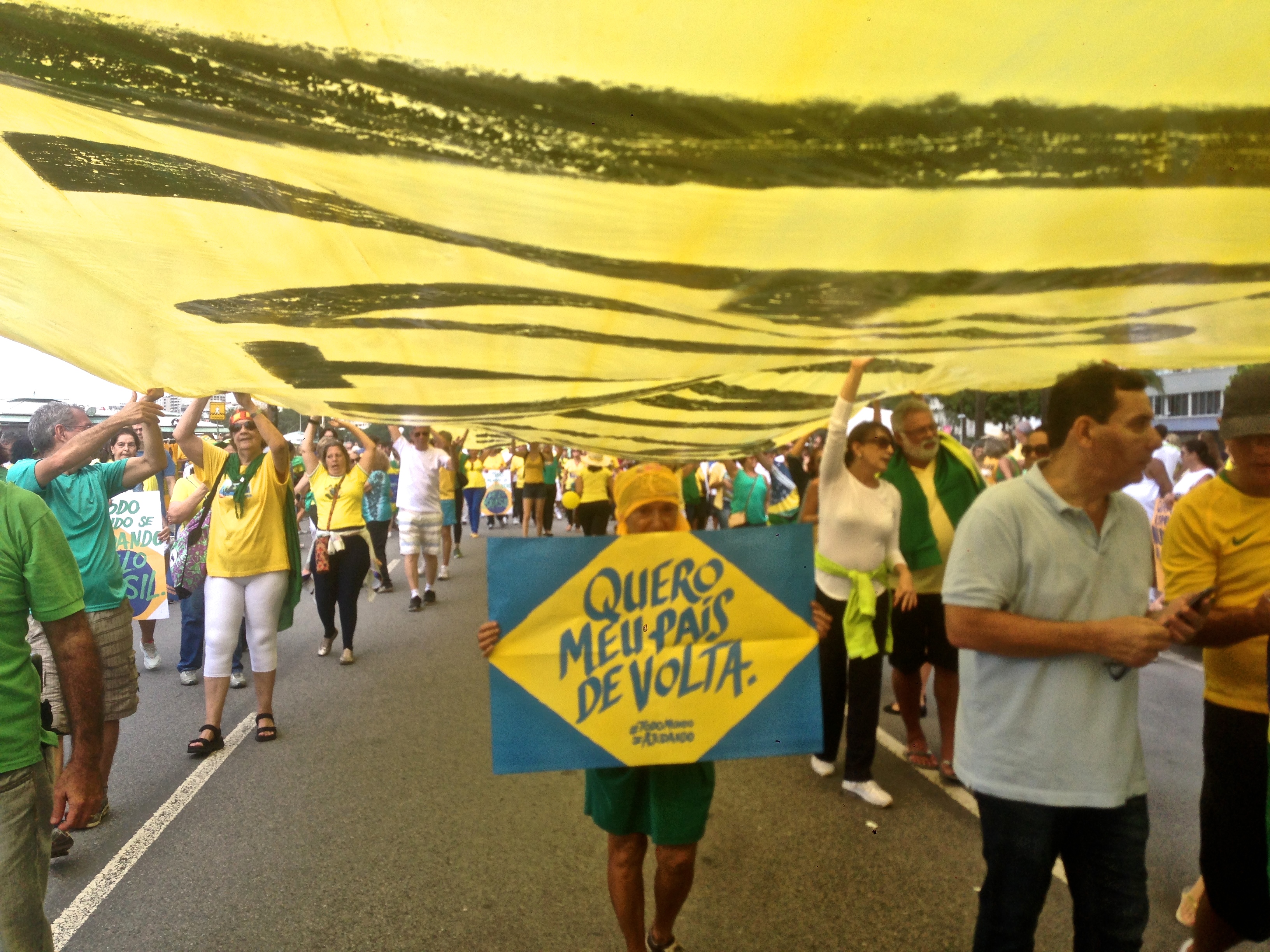 Woman holding a sign in Rio that reads "I want my country back". Photo by Alix Vadot.
Share

In Rio de Janeiro, where music and dancing are continuous, a different kind of party took place on the streets of Copacabana Beach on Sunday, March 13, 2016. Music and dancing may have been present, but chants, anti-government speech and national songs, along with the constant roaring of helicopters crowding the sky above, dominated the scene.

People from all over the city had gathered to protest against the current president, Dilma Roussef who, having been accused of involvement in large-scale corruption, is now facing the threat of impeachment. “Fora Dilma”, “Fora Lula” and “Fora PT” were three of the most common chants, calling for the impeachment of Dilma and her party, the PT (Partido dos Trabalhadores, Workers Party), as well as the imprisonment of ex-president Lula da Silva, whose involvement in corruption scandals was recently revealed. Brazilian protesters could also be heard repeating the phrase “A nossa bandeira jamás sera vermelha” (our flag will never be tainted with red), showing a strong patriotism and refusal to let their country be manipulated like it is now. Additionally, all those present at the protest carried posters that were part of a Brazilian company’s campaign to better the country, #TodoMundoSeAjudando (Everyone is helping each other).The posters read various phrases such as “Quero meu pais de volta” (I want my country back) or “Brasil um filho teu não foge a luta” (Brazil, your son does not flee the fight), a passage taken from the national anthem.

Protests took place all over the country that day, with the largest taking place in Sao Paulo, Brazil’s financial capital. People also gathered against Dilma and Lula in Brasilia, Recife, Fortaleza and Salvador, as well as more than 400 other cities.

While this strong patriotism and enthusiasm for having their voices heard succeeded in creating an incredibly positive energy, the issue at stake is a serious one. Corruption scandals have taken over the country’s political scene and, along with the current economic crisis, have planted a seed of anger in the hearts of Brazilian citizens. In 2014, the Brazilian Federal Police launched an operation called “Operação Lava Jato” (Operation CarWash). The objective of this operation was to investigate a corruption and money-laundering scheme involving public resources adding up to an estimated 10 billion Brazilian Reais, or approximately $2.7 billion using today’s currency exchange rate. This is the largest corruption investigation case in Brazil to date. Initially meant to investigate a few companies accused of money laundering, the operation eventually uncovered a wide network of organizations involved in the scandal. A full diagram of the currently condemned and suspected personalities can be found here.

The former director of Petrobras, a worldwide leader in energy whose majority stockholder is the Federal Government of Brazil, admitted to the scheme. He revealed that his company had been making deals with various large construction companies in Brazil in order to inflate the value of Petrobras contracts. This money was then used to pay bribes and funnel money to state officials, particularly those of the ruling Worker’s Party, to gain government support for the company. According to Financial Times, the amount of money used in this scandal over the past decade accounts for almost half of the company’s market value. Dilma Roussef, the current president and member of the Worker’s Party, has not been found directly linked to the scandal but remains under suspicion, as her position as chair of Petrobras from 2003 to 2010 coincides with the largest part of the company’s involvement.

More recently, ex-president Luiz Inacio Lula da Silva, founder of the Workers’ Party, has also been suspected of possible involvement in corruption scandals. On March 4, 2016, his house was searched by police forces and he was detained and asked to give a testimony before authorities. The accusations of his involvement were based on the discovery of a beachfront apartment and ranch that had gone through expensive renovations amounting to around $270,000. Lula has not pleaded guilty to these accusations. His detainment on March 4th had caused commotion in front of his house in Sao Paulo where civilians were both pro- and anti-Lula. In his time of presidency, Lula had been well-loved and these accusations have angered some of Brazil’s population. He has now accepted a position as Dilma Roussef’s chief of staff, something that will give him increased legal protection and will allow him to avoid jail time. As a cabinet minister, the ex-president can now only be tried by Brazil’s highest court, the Supreme Federal Tribunal. This means Sergio Moro, currently in charge of Operation Lava Jato, will no longer be able to pursue him. On the night of March 16, 2016, when this was announced, people in Rio participated in a “panelaço” (literally, hitting pots and pans) to show their refusal to hear what Dilma would have to say in a speech she had planned to give. Later that night, people all over Brazil took to the streets in protest once again.

When asked what he hoped for for the future of Brazil, a participant of the manifestation on Sunday responded “the end of impurity” but could not form a clear answer of what would happen to the country if Dilma was successfully impeached. Some have postulated that her impeachment may lead to chaos and a broken nation and that a better-organized political reform movement is necessary. Some have even deemed the protests to be an idiocy, claiming that Dilma’s impeachment will do nothing for the country, as all of Brazilian politicians “have their hands dirty“. At Copacabana this Sunday, some protesters exhibited strong support for the election of Sergio Moro as the next president while others called for “an urgent military intervention”. Despite the existing momentum of these protests, however, Brazil still has a long road ahead before achieving political purity and fulfilling their flag’s mantra “Ordem e progresso” (order and progress).