The Forgotten Population on the Brink of Genocide 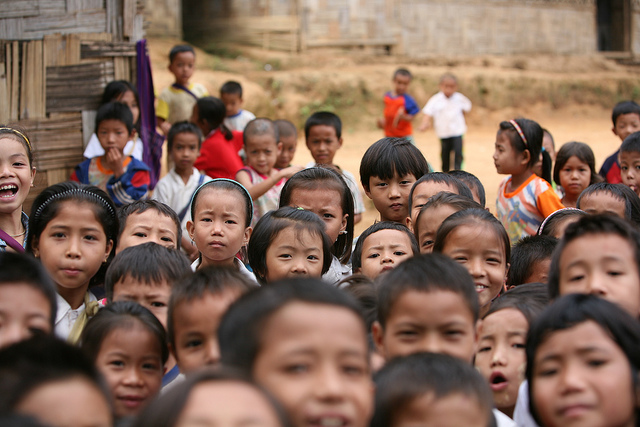 Children at the Ban Tractor refugee camp on the Thai/Burma border. Decades of conflict in Burma has led to forced displacement. https://flic.kr/p/gDnqfW
Share

Situated on the border between Bangladesh and Burma, in Burma’s westernmost state of Rakhine, reside one of the most oppressed and persecuted refugee populations in the world.  Known as the Rohingya people, the refugees represent a stateless Muslim minority in an otherwise predominantly Buddhist country who have been subjected to systemic persecution and human rights abuses by the Burmese authorities since the 1970s. Despite their protracted subjugation, this obscure crisis only recently reappeared in international headlines after state-sanctioned brutal military action was launched in reaction to some border post attacks by armed men in October of this year.

Since the military operation began, thousands of Rohingya have been forced to flee their homes in the hope of escaping violence and abuse, with a UN official reporting that the Rohingya are being ethnically cleansed. In an attempt to belittle the severity of the situation, the Burmese government has banned foreign media from entering the region. However, Rohingya who have reached Bangladesh have recounted the horrors that they have endured, with statements elucidating that troops were “killing men, shooting them, slaughtering children, raping women, burning and looting houses, forcing these people to cross the river (into Bangladesh)”.

Due to its geographic location, the state of Rakhine, formerly known as Arakan, hosts both a Muslim Rohingya and Buddhist Arakan population. The state-run press vehemently distinguishes and divides the two groups between “locals” and “Bengalis,” asserting that the Rohingya are illegal Bangladeshi immigrants. Despite these claims, there is significant evidence that Islamic communities have inhabited the Arakan state for over a millennium and that the Rohingya have been present in Burma for many centuries.

Following Burma’s independence from British rule in 1948, the Rohingya were granted Burmese citizenship in 1948 under the Union Citizenship Act 1948, with the parliamentary government and the Prime Minister, U Nu, officially referring to the group by the title of “Rohingya” and according the community all the benefits of full citizenship. However, Burma’s volatile transition towards a potential democracy and reconciliation between its various religions was halted by the coup d’etat and ascension of military officer Ne Win to power in 1962. Establishing a military junta, Ne Win imposed violently oppressive policies on the nation during his dictatorial rule, particularly upon the Rohingya who he espoused to be “foreigners who had filtered into the country illegally.” In 1978, he launched the large scale military Operation Nagaimo, also known as the “Operation King Dragon,” to purge the Rakhine State of its Rohingya inhabitants, resulting in a widespread decimation of villages and mosques and the confiscation of land. Nearly a quarter of a million Rohingya are said to have fled to neighbouring Bangladesh, with many of these being later repatriated back to Burma where they faced prosecution, torture and death.

The atrocities of the military crackdown culminated in the revocation of the 1948 Citizenship Law and the instauration of the repressive Burma Citizenship Law which officially stripped the Rohingya of their Burmese nationalities. Legal and practical constraints were subsequently enforced making it near-impossible for the Rohingya to be recognized as national citizens. Whilst the community has been allowed to “reside” in Burma, they are still considered “resident foreigners” by the authorities and cannot qualify for citizenship unless they can acquire proof that their ancestors were settled in the country prior to 1823. This stipulation has effectively allowed the Burmese government to deny the Rohingya of a citizenship, thereby rendering them legitimately stateless.

In 1991, further persecution of the population was sustained through the Pyi Thaya Operation, also known as the Clean Nation/Beautiful Nation Operation, resulting in another surge of 200,000 Rohingya refugees entering Bangladesh. It is now estimated that 300,000 Rohingya refugees still currently reside in Bangladesh along the border in squalid and un-registered refugee camps, with only 35,000 receiving some sort of assistance from NGOs.

In the international community, the situation remained dormant, suppressed under the weight of Burma’s regime, until 2012 when tensions between the Buddhist Rakhine and Muslim Rohingya exploded, leading to widespread violence in the region. The Rohingya were solely blamed for the trouble, with President Thein Sein stating that the only solution would be to deport the refugees to other countries. However, Bangladesh refused to accept any more refugees, whilst simultaneously trying to send many Rohingya back to Burma despite the knowledge that they would be prosecuted. This has left the disparaged community in the midst of a “political ping-pong,” as neither country assumes responsibility for them.

The underlying tensions resurfaced once more this year, reaching a breaking point when nine Burmese police officers were killed in Rakhine along the border with Bangladesh. Although no one claimed responsibility for the attack, the insurgent group known as the Rohingya Solidarity Organization (RSO) was blamed, leading to a general crackdown on the entire community. Since the attack in early October, the UN estimates that 30,000 people have been displaced, 70,000 lack access to food and dozens have been killed. Given the government’s history of oppression towards the marginalized community, it comes as no surprise that it is capitalizing on a renewed opportunity to expunge the Rohingya.

What has been a shock is international reaction to the devastation occurring in the country. Aung San Suu Kyi’s election as the State Counsellor earlier this year, essentially becoming de-facto leader, was globally hailed as a democratic victory. As a fervent defender of human rights, having been awarded the Nobel Peace Prize in 1991, it should have been expected that some sort of regulations or protections would be afforded to the religious minority by Aung San Suu Kyi. However, her party, the National League for Democracy (NLD), remained silent upon the matter. In fact, the administration has now begun denying the claims of the recent abuses, despite Human Rights Watch releasing satellite images depicting the eradication of over 1,200 structures.  In a statement published earlier this week, the President’s office “refuted the fabrications made by international media, blaming the violence on terrorist groups and the Presidential spokesman, Zaw Htay, further denied the allegations during a press conference on Wednesday.

In a bid to conceal the proliferation of the abuses being inflicted, the government has blocked all forms of international access to the

area, including the media. Not only does this impede journalists from accurately reporting on the situation, but, more importantly, it has prevented the entry of desperately needed aid. According to the UN’s World Food Programme (WFP), food aid deliveries for more than 80,000 people in the state has been cut-off by the military. The WFP, which usually feeds around 80-85,000 people in the sealed off area, has been prevented from completing their task. “There is military everywhere and a curfew in place. It’s impossible to access any of the areas affected.” The UN estimates that 30-50% of the 3,000 children suffering of acute malnutrition in the area are at imminent risk of dying.

Not only has the Burmese administration failed to act upon what is increasingly being coined a genocide, but Bangladesh is now refuting the entry of refugees under a clear infringement of international law, which prohibits the return of people to a country or place where they are at serious risk, all whilst the international community stands idle. Both the EU and the UN released statements over the summer urging Burma to put an end to the “brutal repression,” but this plea fell on deaf ears and no stringent follow up was executed from either body. Moreover, Obama even retracted the longstanding U.S. trade sanctions against Burma in October, stating that the regime’s pattern of using repressive tactics has been “significantly altered by Burma’s substantial advances to promote democracy” over the past year. Although the UN has called for an impartial investigation, none has been conducted as of yet and the situation is growing increasingly dire.

To counter the claim of Suu Kyi’s impassiveness, many have argued that her party actually exerts little power over the military, who, despite their power transfer to the NLD after 5 decades of rule under a military junta, still wield a large presence in Burmese politics. Under Burma’s new constitution, the military still retains control of the defence and interior ministries, as well as the contested border control.  “The government’s response suggests that it either has no control over the still-powerful military, or considers protecting the ethnic minority as too politically charged in light of the country’s vocal Buddhist nationalist majority,” Ryan Aherin, senior Asia analyst at Verisk Maplecroft, said in a note this week.  This lack of authority by the Suu Kyi-influenced government displays a severe fracture in Burma’s supposed transition to democracy, disputing the notion that Burma has successfully evolved from its era of military terror. Although Suu Kyi faces a delicate situation between remaining apathetic towards a worsening humanitarian crisis and jeopardising the fragile bond between the old and new regime, a stance must be taken to enshrine the human rights of the Rohingya.

If Burma hopes to retain any of its glorious accolades from earlier this year, it will need to rectify the situation immediately. Urgent assistance must be deployed into the region, the international community should be granted permission to enter the area, both for humanitarian and investigative purposes, and there must be a coordinated approach from countries in the region to ensure that refugees are able to escape violence and persecution. Furthermore, the Association of Southeast Asian Nations (ASEAN), will need to overlook their “non-interference” policy and act immediately to pressure the government to stop its actions before an ethnic cleansing ensues. The international community shares the responsibility for this situation because of its prolonged silence and should call upon the UN to involve the Security Council before the situation escalates into an official genocide.