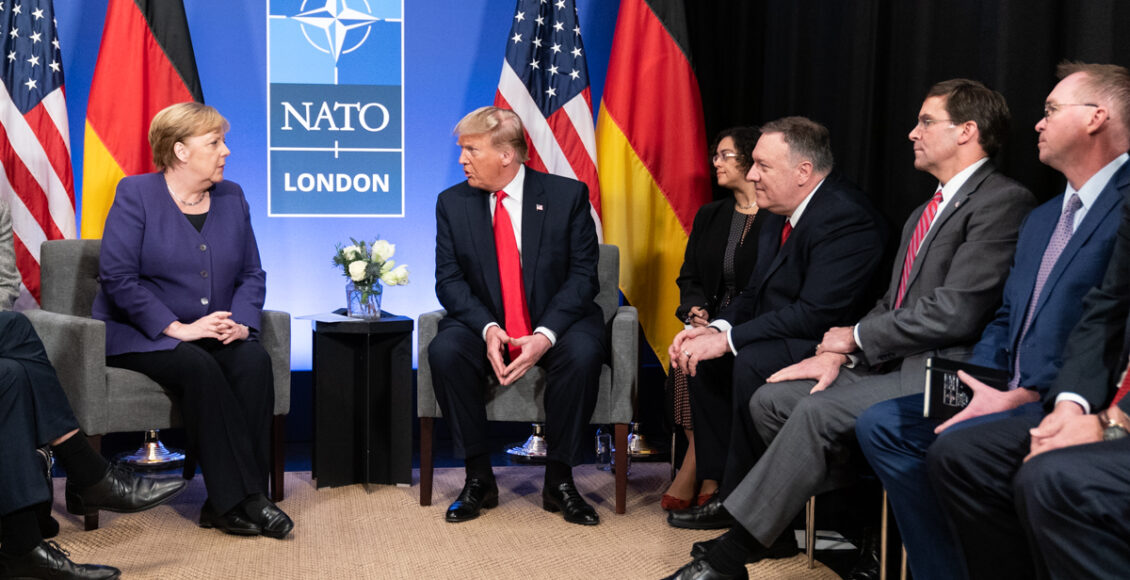 To shift military concentration to Poland, to increase presence in the Indo-Pacific region, to disengage from multilateral relations, to incentivize Germany to contribute more to NATO, or all of the above? Which of these is the reason for Trump’s latest plan to withdraw 9500 US troops from German bases? Because Germany is home to the only high-tech training installation outside of the US, along with billions of dollars of American infrastructure investments, this decision seems logistically unsound. However, if this is a calculated decision as opposed to a management fluke, Trump’s handling of US-German relations likely reflects an outdated view of an alliance evolving from its foundational structure. Failure to update this approach will undoubtedly endanger the US’ relationship with one of its closest NATO allies.

Friendship Between the Two Countries

Germany’s post-WWII foreign policy helps explain its current status as an important friend to the US. Both are members of the North Atlantic Treaty Organization (NATO) founded in 1949 by the United States, Canada, and ten other Western European nations. The organization adopted a collective defence arrangement to protect members’ territories from Soviet military ambitions.

Founding members prioritized their own national interests, which converged in the context of a mutually beneficial relationship. Nearly 30 years after the fall of their “common enemy,” Germany still benefits from its friendship with such a strong military power. Likewise, the US leverages the alliance to strengthen its foreign policy in Eastern Europe, Africa, and the Middle East. The nature of this partnership can be explained by a realist approach to international relations theory, as opposed to liberalism, which posits cooperation as the key to promoting international interests.

Good relations between the US and Germany transcend basic obligations to the NATO alliance. For example, when Soviet forces blockaded land and water access to West Berlin at the outset of the cold war, the US spearheaded a humanitarian operation that airlifted essential goods to the region’s malnourished populace. In response, 300 000 West Berliners showed their solidarity with American forces by gathering at the Reichstag to contest Soviet domination. Additionally, the US helped unite East and West Germany, wherein President George H. W. Bush facilitated the 1989 unification. Despite widespread concerns over the power of a united Germany, this endorsement strengthened trust between the two countries and brought Germany into NATO, ensuring its allegiance to the Western bloc.

While the concept of collective defence is still relevant, Germany and the US’s relationship involves much more than their formal obligations to NATO. The informal norms and values underpinning the alliance allowed NATO to adopt a more liberal institutional structure. Today, the organization comprises 30 member countries under the umbrella of the transatlantic relationship, which encourages intergovernmental cooperation by promoting values such as free-markets, human rights, and the rule of law.

When Did Things Take a Bleak Turn?

Since the final years of the cold war, average defense spending among NATO member states slowly started to sink. But, in 2014, Russia illegally acquired the Crimean Peninsula from Ukraine — culminating in the largest land seizure in Europe since World War II. Following the annexation of Crimea, fears of Russian military expansion spread throughout the international community, reminding NATO members of the organization’s original mission. Months after the annexation, NATO members agreed to increase their defence spending to at least 2 per cent of gross domestic product by 2024. Average spending among NATO’s Western European numbers has not been at this number since 2003.

Still, the United States remained skeptical of Germany’s ability to meet this target and of  the finance ministry’s true intentions when overseeing budget allocation. At NATO’s 70-year anniversary conference in 2019, Vice President Mike Pence claimed that the United States has done “well more than our fair share” and that “German armed forces revealed glaring deficiencies in Germany’s military readiness,” despite being “Europe’s largest and healthiest economy.”

In addition to dissatisfaction with Germany’s defence spending, Trump opposes Germany’s current role as a mediator between the Western alliance and Russia. Discourse surrounding Nord Stream 2 — a pipeline project that will bypass Ukraine to transport gas from Russia to Germany — illustrates this clash. The US and some Eastern European states believe the project will give Russia greater political and economic leverage over Europe, while buttressing its power over Ukrainian territory. Germany maintains that this supply route is critical for the EU’s energy security and for fulfilling its demand for gas. What’s more, Germany views any sanctions or foreign interventions as a direct encroachment on the country’s sovereignty.

Trump’s frequent singling-out of Germany regarding its obligations to NATO is unsurprising to realists. Within the realist paradigm, his actions could reflect genuine national security concerns. Still, his skepticism regarding the strategic advantage of the alliance is a shift from Barack Obama’s diplomatic and friendly tone towards the European ally — a rapport that was more reminiscent of liberalism. While Obama accused the UK of free-riding and falling short of commitments to defence spending, the president was warm with Germany and its chancellor Angela Merkel because of their shared stances on issues like refugees and climate change. Hence, agreement on these contemporary international relations norms was enough for Obama to overlook some other matters like commitments to NATO’s defence objectives.

Based on the Realist characterization that international relations are fundamentally anarchic, Western countries perceive themselves as constantly being exposed to geopolitical threats. This same belief underlines Trump’s demand that one of NATO’s most powerful members will continue to take an active stance in fulfilling the organization’s mission, regardless of the decade. Given Trump and Merkel’s existing disagreements on climate change policy and trade balances, unilaterally pioneering NATO’s agenda would mean overstepping his bounds. Like his other idiosyncratic policies, Trump’s plan to withdraw troops from Germany is shocking because it undermines current standards emphasizing collective decision-making among NATO members.

Since the cold war, the NATO alliance has drawn increasingly close to Russian borders, alienating the country from the rest Europe. During the Munich Security Conference that took place this February, the US Secretary of State, Mike Pompeo, said in a speech:  “The death of the transatlantic alliance is grossly exaggerated… The West is winning, and we’re winning together.” However, with Russia engaging in provocative military activity in Ukraine and rapidly modernizing its nuclear weapons, Pompeo’s confidence is unwarranted. Whether or not the United States and Germany will pursue future bilateral initiatives depends on their respective interpretations of collective security, and if this commitment outweighs the urge to tally their contributions to NATO.

Featured image “President Trump Meets with the Chancellor of the Federal Republic of Germany” by The White House is Public Domain.